American chemistry output has largely recovered from last year’s highly active hurricane season, and the stage is set for significant growth in 2018. Nonpharmaceutical U.S. chemistry output increased about 0.8% in 2017 and is expected to rise 3.7% in 2018, according to the American Chemistry Council’s (ACC) report, “Year-End 2017 Chemical Industry Situation and Outlook.”

Central to last year’s robust performance was a global economy primed for growth and higher demand for American chemical exports. For the first time in a decade, the world’s major economies are simultaneously on an upswing. As new shale-advantaged capacity comes online and demand increases in end-use markets abroad, export growth will be a key driver of chemical output over the next decade.

“After a hard second half of the year, it’s looking like 2017 is going to be a robust year for the industry, and 2018 should see strong growth,” says Kevin Swift, the ACC’s chief economist. “There’s an incredible amount of capacity coming online, particularly increasing basic chemicals and some of the downstream products. There’s a recovery in specialties that’s underway, after periods of recent weakness, largely centered in oil-field chemicals. That sector will enjoy growth this year and in years to come.” 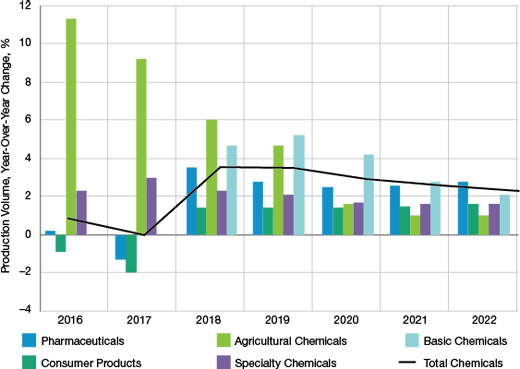 ▲ Overall chemical production volume is expected to increase in 2018, and then taper off through 2022. Image based on data from ACC.

A strong 2017 saw lower third-quarter volumes because of the year’s active hurricane season and its effects on the Gulf Coast. In late August, Tropical Depression Harvey grew to a Category 4 hurricane before battering the South Texas coast, the first major hurricane of that strength to make landfall in the U.S. in more than a decade.

Harvey was one of three major hurricanes that contributed to making last year’s unusually active hurricane season the costliest on...