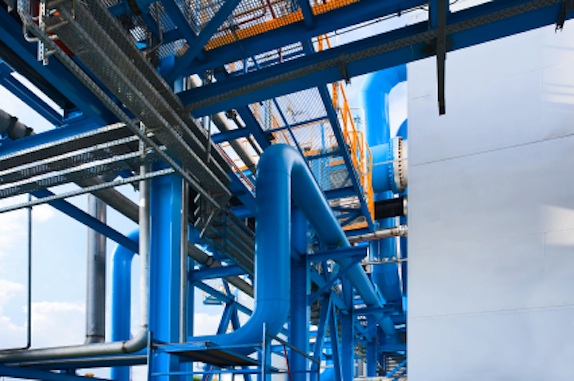 The issues associated with scale-up of mixing processes have been recognized for many years (for example, Bowen, Chemical Engineering, March 1985; Leng, Chemical Engineering Progress, June 1991).  As processes are scaled-up, the timescales of mixing generally increase while the timescales of the process do not change.  For example, if the concentration of reactants and the reactor temperature and pressure are constant on scale-up, the timescale of the reaction will also be constant.  However, if a stirred tank is scaled using the common rule of geometric similarity and constant power per mass, a process at the 20m3 full scale will take almost 5 times longer to blend than a 20 liter pilot plant.  For some processes this longer blend time may not matter, but for many processes this difference in blend time will be critical for success or failure.

Successful scale-up for mixing sensitive systems can be achieved by maintaining a constant ratio between the process rate and the rate of mixing – essentially constant Damkohler number.  The key to this approach is identifying the rate limiting step, which may change on scale-up.

Speakers in this session will discuss their experiences developing and scaling-up mixing sensitive processes.

At the inaugural AIChE Process Development Symposium in 2003, Ed Paul stated, “Always assume there is a mixing problem until proven otherwise.”
Ed’s sage advice has been an important consideration in my process development work. However, with all the tasks that are necessary to achieve successful process development, we need to efficiently understand our “mixing problems” so we can effectively deal with them long before commercialization.
In his comprehensive review article on the influence of mixing on reaction sensitivity, John Bourne recommended an experimental protocol to determine mixing resistances in reaction processes (Bourne, 2003). We have applied the Bourne Protocol to reactive and non-reactive systems to determine when mixing needs to be carefully considered in our processes (Teich, Sarafinas, Morton 2010a+b, Sarafinas and Teich in Kresta et al, 2016). The Bourne Protocol is more efficient than some other methods that use model reactions (Sarafinas 2011).
This paper will extend the recommendations of Bourne’s 2003 paper, and discuss some theoretical and practical considerations when trying to understand when micromixing, mesomixing, and macromixing create “mixing problems” in your process.
REFERENCES
Paul, E.L., “Notes on Process Development: Pharmaceutical Intermediates and APIs,” AIChE Process Development Symposium, Poconos-Lake Harmony, PA, 2003
Bourne J.R., “Mixing and the Selectivity of Chemical Reactions”, Org. Process Res. Des. Dev.; 2003; 7(4) pp. 471-508.
Teich, C., Sarafinas, A., Morton, P., “Taking the Min to the Max: A Case Study in Small Scale Process Development Using On-Line Reaction Calorimetry and in-situ Particle Characterization,” AIChE 2010 Annual Meeting, Salt Lake City, UT, Paper 422b, 2010a.
Teich, C., Sarafinas, A., Morton, P., “Can This Process Be Saved? A Search for Understanding Using the Bourne Protocol and Advanced Process Development Tools,” AIChE 2010 Annual Meeting, Salt Lake City, UT, Paper 437e, 2010b.
Kresta, S.M., Etchels III, A.W., Dickey, D.S., and Atiemo-Obeng, V.A., Advances in Industrial Mixing: A Companion to the Handbook of Industrial Mixing, John Wiley and Sons, 2016.
Sarafinas, A., “The Evolution of Process Understanding Through Micromixing and Mass Transfer Studies in the Successful Development of a Specialty Chemical Process,” AIChE 2011 Annual Meeting, Minneapolis, MN, Paper 389e, 2011.

Scale-Up (and Down) of Viscous Mixing Processes

Understanding the role of mixing in scale-up is one of the keys to successful process development. Generally, scale-up is achieved by maintaining a constant ratio between the rate limiting step of the process, usually a reaction, and the rate of the mixing. Essentially scale-up is achieved by keeping Damkohler number constant.
In the turbulent regime, when scaling at constant power input by the agitator per mass of fluid, the blend time increases and, if the reaction is fast and competitive, steps must be taken to ensure that the reactants come into contact in a region of high energy dissipation and mixing rate by, for example, using dip pipes to feed at the tip of the agitator’s blades.
When processing viscous fluids in the transitional and laminar regimes the blend time will decrease on scale-up. The reason for this is that the impeller Reynolds number increases with increase in scale and a different scaling problem arises.
The mixing at small scale may be slower in the lab and pilot reactors than achievable in the plant. If a mixing sensitive reaction is being studied at small scale, it is possible that the chemistry will “fail” because the mixing is too slow, compared to the rate of reaction, compared to the rate achievable when performing the same reaction at a larger scale.
It is possible to get a “false negative” solely due to slow mixing at small scale that would not be observed if the process was carried out a larger scale and Reynolds number. This presentation will discuss how to identify these issues and what steps can be taken to reduce their effects resulting in successful scale-up.

One of the most pressing environmental issues facing the Canadian Oil Sands Industry is the growing quantity of Fluid Fine Tailings (FFT) being stored in large open ponds. These tailings are a byproduct of the water-based extraction process used to recover bitumen from oil sands. While the process yields a high bitumen recovery, the mineral solids (coarse and fine particles), which comprise about 85wt% of the oil sands, are sent away as a slurry stream. The coarser solids separate easily from the slurry and can be used to construct containment structures, while the fines remain in suspension for extended periods of time. The resulting gel-like suspension can contain 30-40wt% mineral solids, with fines making up to over 90% of the suspended solids. Generally, clay minerals with high water retention capacity, constitute over half of the fines.

In order to enhance dewatering of FFT, high molecular weight medium charge density polyacrylamides are used to produce clay flocs that will settle. In this process, the polymer flocculant must be adequately mixed into the FFT to maximize contacting between the polymer strands and clay particles. The mixing of the polymer with the tailings is challenging since both the FFT and polymer are non-Newtonian fluids. Work to date has shown that the effectiveness of flocculation can vary significantly depending on the composition of the FFT, the quantity and concentration of the polymer, and the mixing and shearing process. As a result, dynamic mixing offers a significant advantage over static mixing strategies due to the ability to independently control the mixing energy input by adjusting the impeller speed. Adjustments in energy can be used to compensate for changes in flow rate and material properties (polymer and FFT) in order to prevent under-mixing or over-shearing, such that high quality flocculation can be maintained over a much wider operating window.

In this work, the flocculation of concentrated FFT was investigated over a wide range of conditions both at a laboratory and at a field pilot scale. The laboratory scale vessels produced good flocculated FFT under various combinations of FFT properties, polymer dosage, flow throughput (or residence time) and impeller RPM.  Building on the successful combination of operating conditions under which good flocculation was achieved in the lab, a scaling approach was developed. Test work was then conducted at the field pilot scale and the results were compared to the laboratory data utilizing this scaling approach. Very good agreement was achieved between the two scales from this analysis, suggesting that the approach developed can be effectively used as design criteria. With this important conclusion, further development of dynamic mixing technology for tailings flocculation could be confidently carried out at smaller scales to reduce development time and costs.