An Interview with Syamal Poddar, 2016 Philanthropist of the Year | AIChE
Skip to main content

The AIChE Foundation had a lot to celebrate at the 2017 Spring Meeting in San Antonio. Director of Development Stephanie Viola had the opportunity to sit down with Dr. Syamal Poddar, Vice Chair of the Fellows Council, Trustee, and recipient of the 2016 Philanthropist of the Year Award, to hear his insights and reflections on what this campaign means to him personally, to the AIChE Fellows community, and to the world at large.

Dr. Poddar is President and founder of the Houston, TX-based consultancy Poddar and Associates. Over his career in chemical engineering, he has been involved in a spectrum of AIChE activities, and in partnership with his wife, Susmita, Dr. Poddar has contributed financially to numerous initiatives associated with the Foundation’s Doing a World of Good campaign.

In reflecting on his philanthropy, Dr. Poddar says that, “as time goes by, Susmita and I have become even more passionate about the causes we support. And, we don’t put off until tomorrow the positive impact we can make today.” He says that the couple supports the work of the AIChE Foundation “because of its mission to make the world a better and safer place through chemical engineering — which is something we both believe in.” Dr. Poddar adds, “Susmita and I are fortunate enough to share in such meaningful endeavors together.”

The Doing a World of Good campaign, now in its third year, is pioneering some of the Institute’s most innovative and valuable programs. From supporting the launch of the Rapid Advancement in Process Intensification Deployment Institute (RAPID) to enhancing K-12 outreach programs that educate thousands of young people about STEM careers, the impact of giving has never been as great as it is today.

Of course, none of this would be possible without the extraordinary generosity of AIChE Fellows. Together, since the fall of 2014, AIChE Fellows have given $902,000 to support the Doing a World of Good campaign. 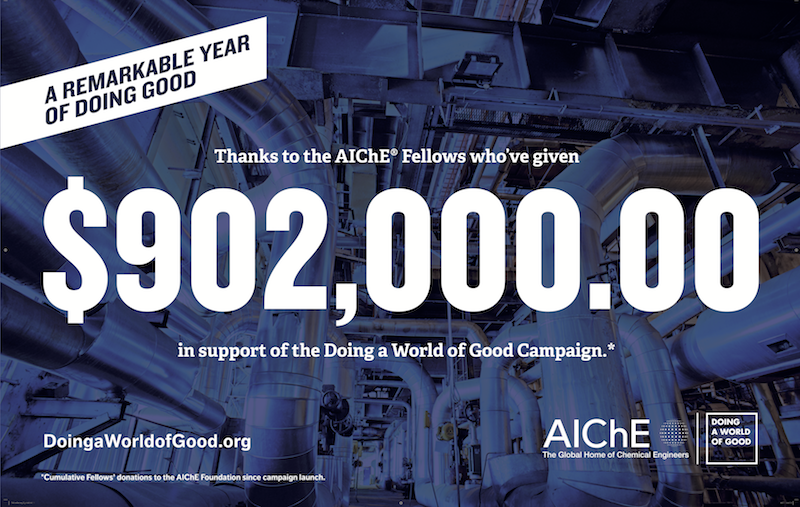 Thanks to their deep commitment to AIChE and the AIChE Foundation, the AIChE Fellows are leaving a footprint and lasting legacy on the chemical engineering profession.

A healthy endowment provides opportunities for an organization to more vigorously deliver upon its mission.

Related Content:
The Doing a World of Good Campaign is one of the most ambitious fundraising programs in our history. AIChE expects to raise $15 million over five years that will be directed toward five transformative priorities. Learn more.

Fellow is AIChE's highest grade of membership and is achieved only by election by the AIChE BOD, generally upon recommendation of the AIChE Admissions Committee through whom all nominations for election to Fellow are processed.