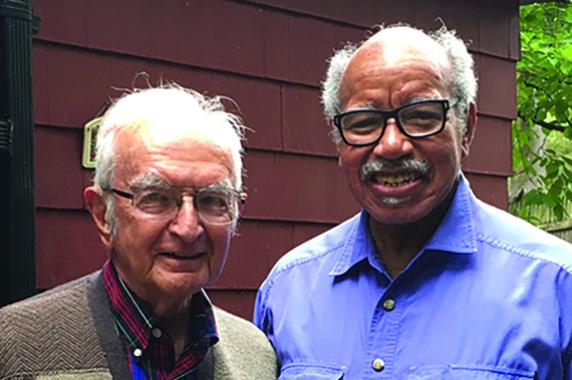 AIChE’s campaign to fund the Henry T. Brown Endowment for the Education of Under-Represented Minority Chemical Engineers has been given a solid foundation thanks to Gerald Lessells — an AIChE Fellow and longtime friend of Brown. To build the endowment, Lessells, who collaborated with Brown on AIChE’s earliest minority outreach activities, has made a challenge gift and will match others' dontations to the fund up to $50,000.

Lessells’ donation was arranged through the AIChE Foundation, which recently launched the campaign to endow AIChE’s Minority Affairs Committee (MAC) scholarship program for high school and college students in honor of Brown — a key figure in AIChE’s outreach to minority engineers. The endowment will ensure a secure source of funds for the MAC scholarships, which have been presented to more than 450 students since 1994. The campaign to endow the scholarships recognizes Brown’s legacy as a leader and continuing mentor to minority chemical engineers over the past 50 years.

Beginning in the 1960s, Brown and Lessells worked together to raise the profile of minority engineers in the Institute and the chemical engineering profession. Brown went on to serve as AIChE’s Minority Affairs Coordinator from 1983 through 2001, and as an AIChE director in the 1980s he advocated for the creation of a formal Minority Affairs Committee. Since the Committee’s establishment in 1990, Brown has remained a guide and mentor to MAC’s members.

Working in tandem with Brown, Lessells’ early leadership of AIChE’s Career Guidance Subcommittee for Disadvantaged Youth, and his service as ad hoc Minority Affairs Coordinator for the Institute in the 1970s, opened doors to a more diverse AIChE membership.

Reflecting on his desire to honor his colleague with an endowment gift, Lessells said, “Henry Brown has given unstintingly of himself in expanding AIChE’s diversity and inclusion over these 50 years.” Lessells noted in particular Brown’s drive to establish MAC, and his continual nurturing of minority engineers through AIChE. Lessells added, “By providing financial backing to the education of under-represented minority chemical engineering students, AIChE is exhibiting very tangible support to equal opportunity for this class of young people — in the best spirit of the half-century AIChE has been active in this effort.”

Lessells is a past director and 65-year member of AIChE. He earned his BS in chemical engineering practice from MIT, and his career in the chemical process industries included many years as Technical Director for the Printing Ink Div. of J. M. Huber Corp. He is a life member of the NAACP, and has held officer positions in AIChE’s Central Illinois and New Jersey local sections. He has also received AIChE’s Service to Society Award and Van Antwerpen Award for Service to the Institute.

In 2015, MAC presented Lessells with its Pioneer Award in recognition of his contributions as a advocate for diversity within AIChE; as co-founder of the original Task Force on Minority Youth Career Guidance; and as the Institute’s first minority affairs coordinator.

To support the Henry T. Brown Endowment for the Education of Under-Represented Minority Chemical Engineers endowment, visit the Foundation website (www.aiche.org/giving), or phone (646) 495-1342.