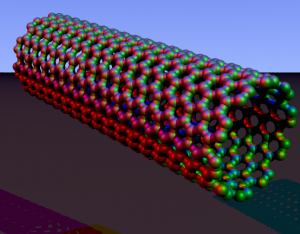 Microprocessors are still years away from peaking, and already we're rushing into a new age of invention. We embrace nano-technolgy's most elegant component, the carbon nanotube and its rigorous atom lattice, to fulfill America's sense of unlimited possibility. Back to the future to President Kennedy's and Gene Roddenberry's New Frontier--this time, beaming down to micro town. 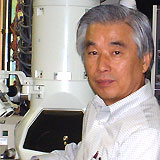 Leave your Star Trek phasers at the door! Can you say, Van der Waals forces?

While the cost of nanotubes was once prohibitive, it 's been dropping as companies build up manufacturing capacity. In an earlier post, MIT nano-researcher, Dr. Michael Strano, predicted nanotube ubiquity's effect on the solar industry:

"At some point in the near future, carbon nanotubes will likely be sold for pennies per pound , as polymers are sold," says Strano. "With this cost, the addition to a solar cell might be negligible compared to the fabrication and raw material cost of the cell itself, just as coatings and polymer components are small parts of the cost of a photovoltaic cell."

With such low prices creating economies of scale, nanotube manufacturing will throw off

a lot of pollution. Even at today's low production levels, one common process releases several hundred tons of chemicals, greenhouse gases and hazardous air pollutants into the air each year. Currently, discovery trumps the environment, and the future impact of global growth remains completely unknown.

In a paper published last week on the ACS Nano website, researchers report they have devised a new, greener production method by removing a pollution-heavy step: heating carbon-based gases and adding key reactive ingredients. It reduces emissions of harmful by-products at least ten-fold and up to a factor of 100. It also cuts the amount of energy used in half. 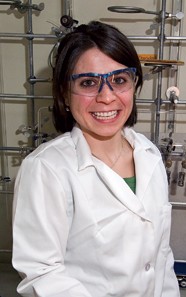 "We were able to do all of this and still have good CNT growth," says Desiree Plata, an MIT visiting assistant professor, who led the original research between 2007 and 2009 as a doctoral student in MIT's joint program with the Woods Hole Oceanographic Institution. Her team's earlier paper set the stage for the current research:

Many industrial chemicals have followed this pattern of initially rapid growth... recognition of malignant environmental... effects... product bans, and, finally, replacement by new technologies on a "few decades" time frame... poised in an aggressively expanding industry, nanoscientists have a unique opportunity to alter... the development of all new materials by incorporating environmental objectives early in the design... process.

In their current study, Plata and her colleagues analyzed a common CNT manufacturing process known as catalytic chemical vapor deposition. This method combines hydrogen with a "feedstock gas," such as methane, carbon monoxide or ethylene. They are then heated in a reactor that contains a metal catalyst which forms CNTs-- once they've formed, unreacted compounds (up to 97 percent of the initial feedstock) are often released into the air.

In a custom-made laboratory-scale reactor, Plata and the researchers heated 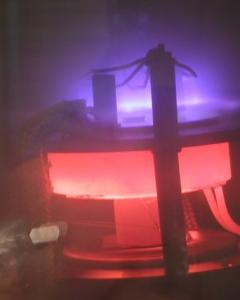 hydrogen and ethylene, and then introduced it to a metal catalyst. More than 40 compounds formed, including greenhouse gases and toxic air pollutants like benzene.The researchers suspected that many of those compounds weren't essential and that heating the feedstock gas was creating the dangerous compounds.

Plata and her colleagues accomplished their dramatic emissions and energy reduction by introducing room-temperature alkynes, with ethylene and hydrogen, directly onto the metal catalyst--omitting heat. They also reduced the amount of ethylene and hydrogen used and still achieved the same CNT growth. Plata says that in a market expected to reach several billion dollars in a few years, these changes could produce "significant cost savings" for manufacturers.

Is this a new paradigm in early stage research?

It is promising that there are people considering the long term effects of their products, this is the first step to sustainable production of anything. A really eye opening book on the concept of sustainable design (designing products from manufacture to life beyond) is Cradle to Cradle. Awareness of a product&#039;s &quot;afterlife&quot; is almost important as developing the product in the first place.

IF I read that, would it make a good Chenected blog-report? Kent

It was co-authored by an architect and a chemist. I think there are a lot of areas that would be of interest to people here. The design they talk about is more in the realm of shampoo bottles and chairs - but to a certain degree design is design. You might do calcs at boundary limits, but you should keep in mind what happens up and down stream of your design. Whether or not there are actual &quot;streams&quot; involved.