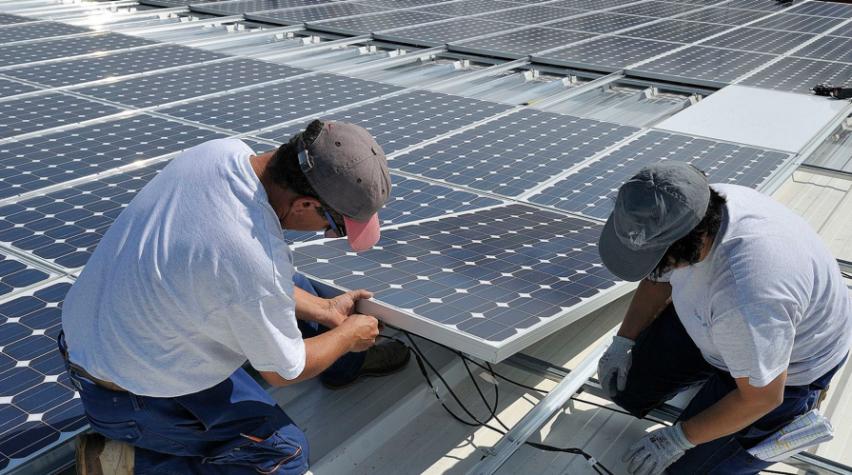 Last year a record-breaking 500,000 solar panels were installed every day as renewables edged out coal to become the world’s largest source of installed power capacity. The pace was so torrid that even the staid International Energy Agency (IEA) finally acknowledged it.

The IEA, which was established to monitor volatile energy markets after the 1973 OPEC oil embargo caught the developed world napping, said it would “significantly” raise estimates for renewable growth after being severely criticized for continually missing the rapid growth of wind and solar.

That recalibration didn't come easy, even though the IEA exists solely to provide its 29 members with accurate information about energy markets. 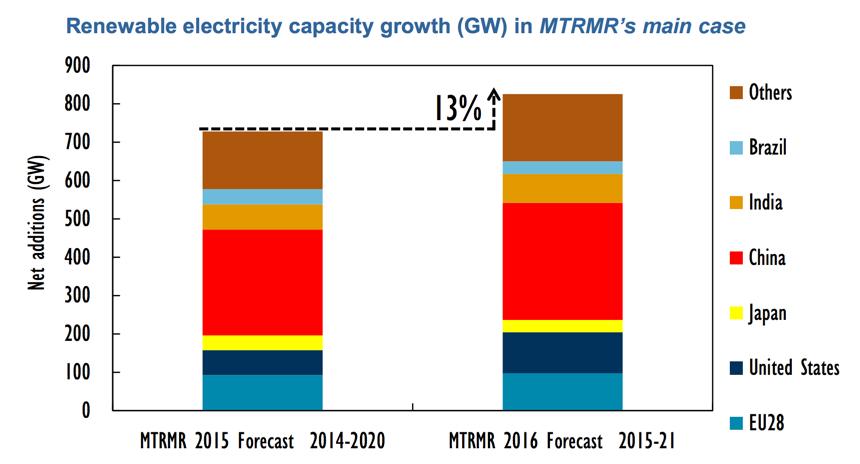 For the last ten years, ensconced at the center of the oil economy, the world’s most prominent energy forecaster had watched its reputation take a beating as it lagged behind bullish renewable predictions from upstart Bloomberg New Energy Finance, which was founded just ten years ago by Michael Liebreich, who is the central informational node of the renewable ecosystem.

As the Paris-based and OPEC-adjacent agency repeatedly miscalled clean energy growth, Liebreich, riding the accuracy of his firm's predictions, vaulted from gadfly to trusted keynoter at many renewable energy conferences, like the yearly World Future Energy Summit in the UAE and his own A-ticket shindig in New York City.

Meanwhile, the IEA and its executive director Fatih Birol seemed to drift from significance along with oil guru Daniel Yergin, who presides over his CERAWeek energy conference in Houston, where he takes the fibrillating pulse of Big Oil — now in complete crisis-management mode — as it parks offshore oil rigs and segues to natural gas.

So in its own cautious way, the IEA has finally declared it's Michael Liebreich's world and they're finally going to live in it.

Beating coal for the first time

The EIA's public makeover began this week at Singapore's International Energy Week, when Dr. Birol stepped back into the zeitgeist and announced that renewable energy reached an important turning point last year (read the press release).

“We're witnessing a transformation of global power markets by renewables, and the center of gravity for growth is moving to emerging markets,” Birol confirmed.

He also said new installations overtook conventional power for the first time in 2015, which is fully explained in the IEA's Medium-Term Renewable Energy Market Report (read the executive summary). 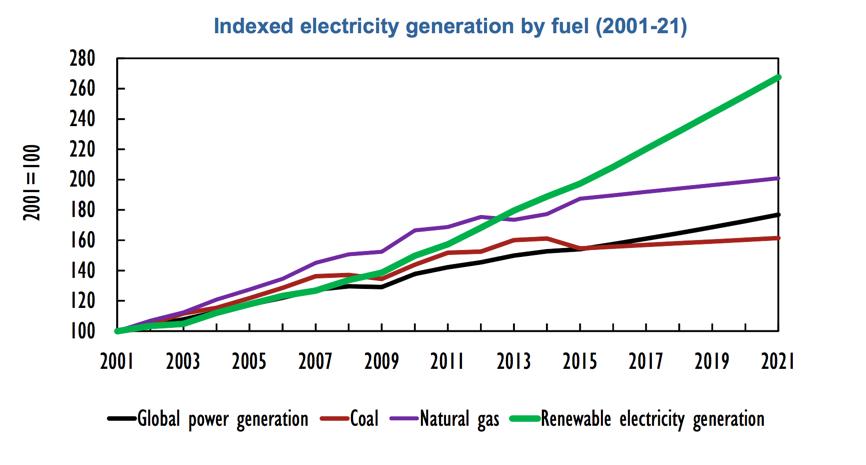 Driven by 66 GW of new wind and 49 GW of solar, last year global renewable power rose by a record 153 gigawatts, the equivalent to 55 percent of newly installed capacity. Total installed capacity exceeded coal for the first time, which sounds impressive, but there's still massive work to be done.

That's because a power plant’s capacity is the maximum amount of electricity it can potentially produce. Since intermittent wind and solar don't generate constantly like coal, they produce less energy over time. So fewer coal plants generated close to 39 percent of the world’s power in 2015, while renewables, including a big chunk of hydropower, made up 23 only percent.

Nevertheless, renewables are expected to make up more than 60 percent of the growth in world electricity and exceed 7600 TWh by 2021, the impressive equivalent of all the electricity currently generated by the US and EU combined.

There are many factors behind this growth. Growth has fed on itself as the industry's global factories boost competition and technology innovation, which is closely coupled with more favorable policy support and financial innovations like competitive auctions and green bonds.

Cleaning up dirty air is another strong motivation. So while CO2 mitigation is the root of post-Paris enthusiasm, in many countries, cutting toxic air pollution plays an equal role, especially in smog-choked Asia.

But falling costs are the greatest catalyst for recent growth, which Dr. Birol said would have been “unthinkable” only five years ago.

The report says the acceleration had begun long before the Paris climate accord in December, and in the future, as the trend spreads to developing countries, renewables will be the fastest-growing source of electricity over the next five years, their share growing from 23 percent in 2015 to 28 percent in 2021. Prices will drop to between USD 30/MWh and 50/MWh for both wind and solar plants (PV) in North America, Latin America, Middle East, and North Africa. 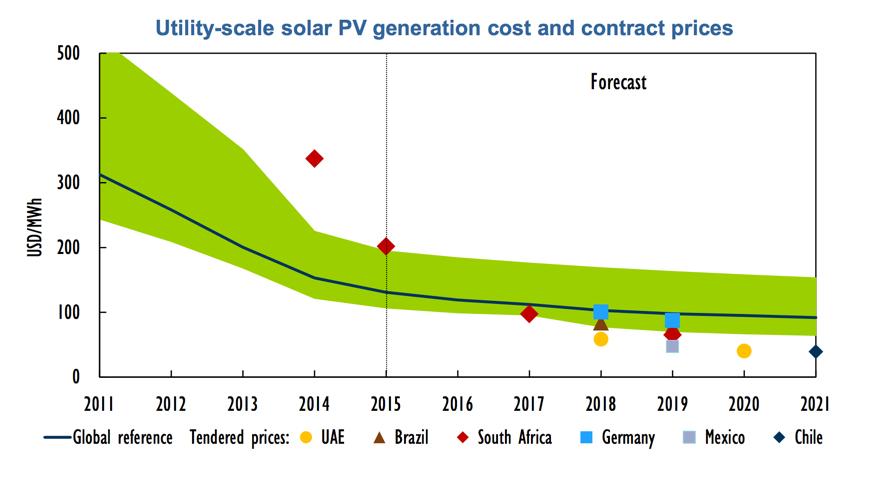 Global growth will be driven by China, the US, and India, the clean-energy hotspots for the next five years. Growth in the European Union, an early adopter, will wane as feed-in-tariffs are cut back. 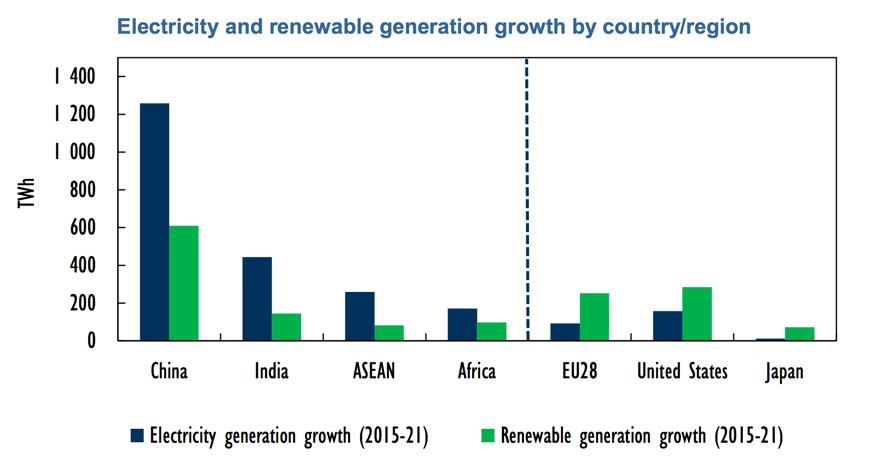 With almost 40 percent of growth, it's no surprise that China remains the global leader of the renewables expansion, where severe air pollution and a favorable policies are driving the growth. By 2021, more than one-third of global cumulative solar PV and onshore wind capacity will be located in China.

Starting from a much lower number and boosted competitive auctions, India’s solar PV is forecast to explode eight-fold, where contract prices have already declined by a factor of two since 2014.

Across the United States, in spite of record low natural gas prices, the extension of federal tax incentives, supported by state-level Renewable Portfolio Standards, has improved the case for onshore wind and solar PV. Although still trailing China, the US should become the second largest market for renewable energy.

In addition to the half million solar panels installed every day, last year in China two wind turbines were installed every hour. At this blistering pace, the IEA predicts the green capacity on power grids will total 42 percent by 2021.

Predicting renewable capacity growth by almost 30 percent in the next five years, Dr. Birol sees the annual market hitting 200 GW by 2020. This would put the world on a firmer path to meeting long-term climate goals.

Among the cautionary notes, renewables have to dominate heat and transportation (which is only aspirational at this time) if the accord’s aims are to be met

Nevertheless, Dr. Birol remains optimistic. “I am pleased that last year was one of records. However, even these remain modest compared with the huge untapped potential of renewables."

How important is nuclear to meeting the 2C threshold? 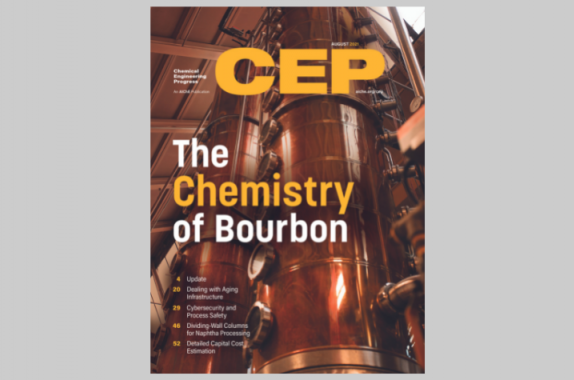 This issue, weigh the benefits of short-term and long-term solutions for aging infrastructure, use process safety risk assessment for cybersecurity risks, get tips for accurate detailed capital cost estimates, and more. 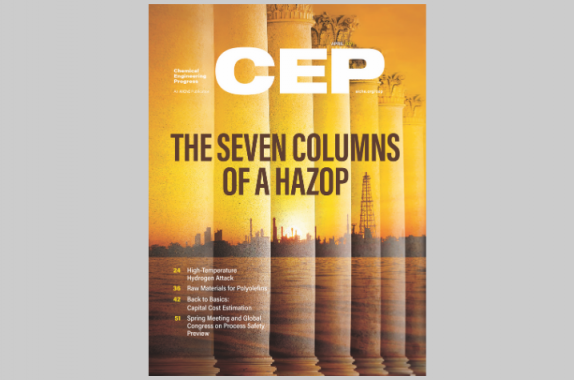 This issue, a seven-question HAZOP study, a look at early-stage capital cost estimation, avoiding a high-temperature hydrogen attack, and more.