Lithium Ion Batteries the Diameter of a Human Hair

Rice University researcher Pulickel Ajayan and his team have created a battery that may finally prove that it's a small world after all. A really small world, that is. 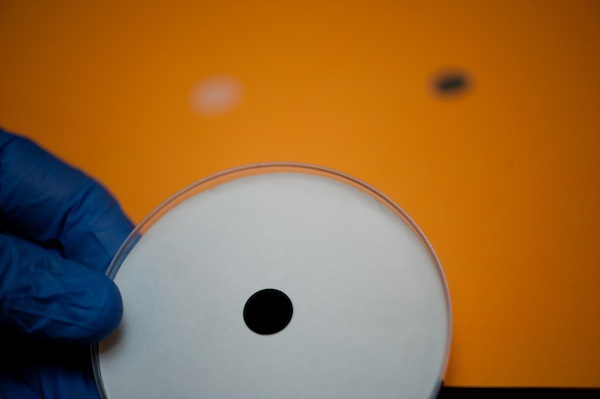 An ultrathin battery/supercapacitor hybrid contains thousands of nanowires, each of which is a fully functional battery. The Rice University lab of Pulickel Ajayan developed the device.

They managed to pack an entire lithium ion energy storage device onto a single nanowire, which they believe is the smallest that such devices can get. The team's experimental batteries are about 50 microns tall--about the diameter of a human hair and almost invisible when viewed edge-on--according to one of the Rice researchers and paper co-author Arava Leela Mohana Reedy.

The paper describes two versions of the battery/supercapacitor hybrid. One was created with a sandwich with with nickel/tin anode, polyethylene oxide (PEO) electrolyte and polyaniline cathode layers. It was built to prove that lithium ions would travel more efficiently through the anode to the electrolyte and then to the supercapacitor-like cathode, which stores ions in bulk and gives the device the ability to discharge quickly. The second manages to pack the same capabilities into a single nanowire. The Rice team built centimeter-scale arrays containing thousands of nanowire devices, about 150 nanometers wide. To provide some context, a nanometer is thousands of times smaller than a human hair.

The Rice research team has been working on the single-nanowire devices for years. The first report of the three-dimensional nanobatteries was December 2010, which you can read about in detail here. In the battery reported last December, the encased nickel-tin was the anode, but the cathode had to be attached from the outside.

A new process puts the cathode inside the nanowire. As Rice University reports:

After much trial and error, they settled on an easily synthesized polymer known as polyaniline (PANI) as their cathode. Drop-coating the widened alumina pores with PEO coats the insides, encases the anodes, and leaves tubes at the top into which PANI cathodes could also be drop-coated. An aluminum current collector placed on top of the array completes the circuit.

"The idea here is to fabricate nanowire energy storage devices with ultrathin separation between the electrodes," said Arava Leela Mohana Reddy, a research scientist at Rice and co-author of the paper. "This affects the electrochemical behavior of the device. Our devices could be a very useful tool to probe nanoscale phenomenon." 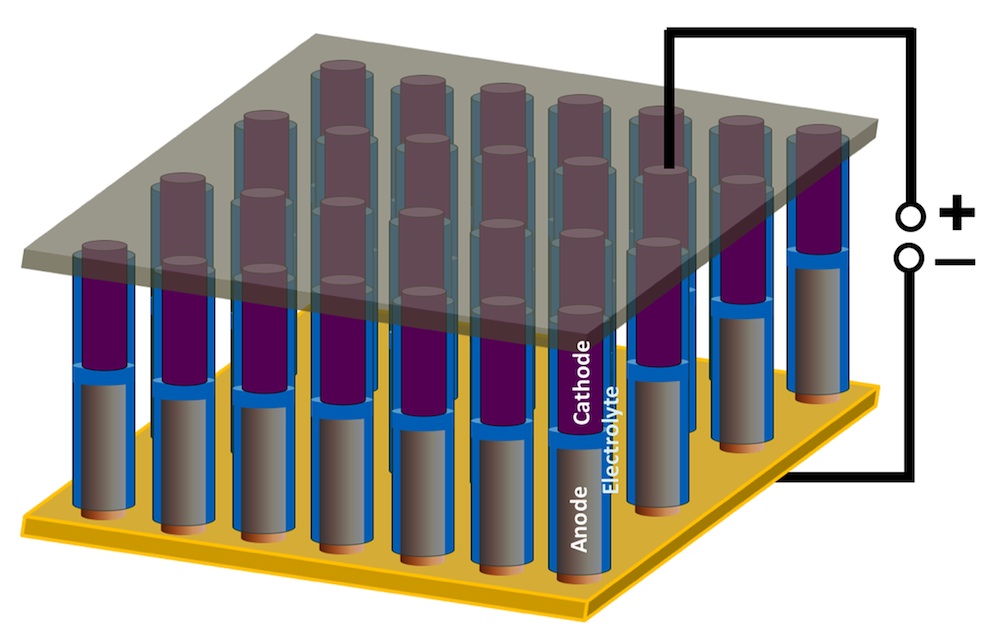 A schematic shows nanoscale battery/supercapacitor devices in an array.

The Rice teams claims the devices show good capacity but they are fine-tuning the materials to increase their ability to charge and discharge repeatedly. It currently drops off after about 20 cycles. You can read the full press release from Rice University and the abstract.

What potential applications will a battery this small have?