With each new press release that pops up on internet energy sites, it's becoming obvious that innovation in the energy business is accelerating. Case in point: In Muscat, the capitol of Oman, Petroleum Development Oman (PDO) and GlassPoint, a small California startup that develops and builds solar enhanced oil recovery (EOR) technology, just announced a $600 million deal to build the largest solar plant in the world. Called Miraah, or “mirror” in Arabic, its 1,021 MWs of thermal solar power will heat 6,000 tons of steam a day to coax heavy oil out of Oman's Amal oil field. 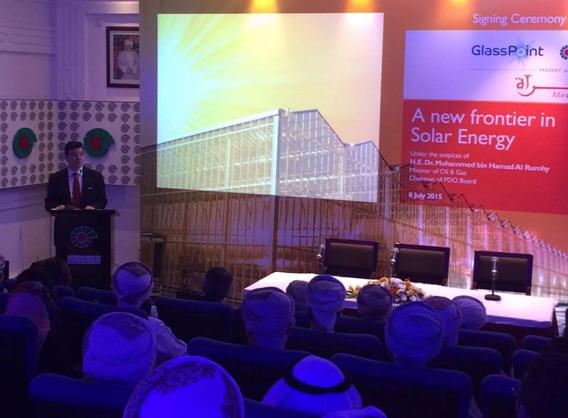 The deal's spectacular size and megawattage may get the headline, but GlassPoint's speedy commercialization is the real story. After all, in the early days — 2011 to be exact — before there was such a thing as solar EOR, GlassPoint had to pay $1 million to install the fledgling industry’s first commercial facility in California for Berry Petroleum, as a proof-of-concept demo. That same year, PDO and GlassPoint began construction on a small test facility near Oman’s capital. When the second, larger Omani facility went online in 2013, it could produce 50 tons of steam a day, 27 times more than its California prototype. Miraah's 6,000 tons of steam is several magnitudes larger still (computer animation of Miraah).

The beauty of GlassPoint's technology is that after its parabolic mirrors capture the sun's energy and turn water into steam, the remaining process is the same as traditional EOR. By piping 600-degree steam deep into the ground to heat rock, the sludge is liquefied and high pressure pushes it up out of the ground. 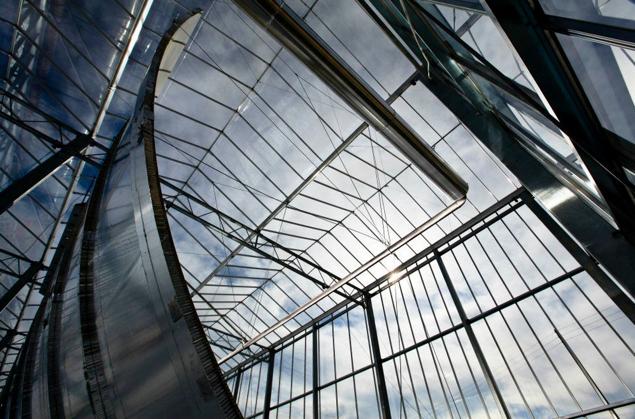 At the Muscat signing ceremony, Raoul Restucci, Managing Director of PDO, said: “PDO awarded GlassPoint the contract on the strength of our successful solar steam pilot, which exceeded expectations for two years. It's propelled us to a project that will be over 100 times larger.” (See press release.)

Reaction to the mega-deal was pretty unanimous. “It’s a real vote of confidence in GlassPoint,” said Jenny Chase, chief solar analyst at Bloomberg New Energy Finance in Zurich. “...It could spread solar-thermal technology to other applications where heat is used."

In the blink of an eye, GlassPoint's solar EOR has attained the rare status of a non-subsidized application that can replace natural gas, creating an enormous new market. Rod MacGregor, CEO of GlassPoint, licking his entrepreneurial chops, agrees: “The oil and gas industry is the next major market for solar energy." But still aware how few oil executives have heard about solar EOR, or GlassPoint for that matter, he unloads his showstopping close, "It takes a tremendous amount of energy to produce heavy oil, with an oil field consuming the same amount of energy as a small city."

Oil companies know that he's not exaggerating very much. Obviously PDO is a believer. And so is Royal Dutch Shell, which helped GlassPoint raise $53 million in September and owns 34 percent of the company. Total, another industry heavyweight, owns 4 percent.

It turns out that GlassPoint's technology arrived in the nick of time for Oman. Burdened with old, tapped-out oil fields that contain a lot of heavy oil, PDO was forced to use huge injections of steam to get the sludge to flow to the surface. PDO, like nearly everyone else in the business, currently burns dwindling natural gas reserves to heat the steam. After a three-year study that examined the results of the Omani test field, PDO (which produces more than 1.25 million bbl of oil a day) concluded that solar power can replace the 22% of the natural gas that it uses for EOR. 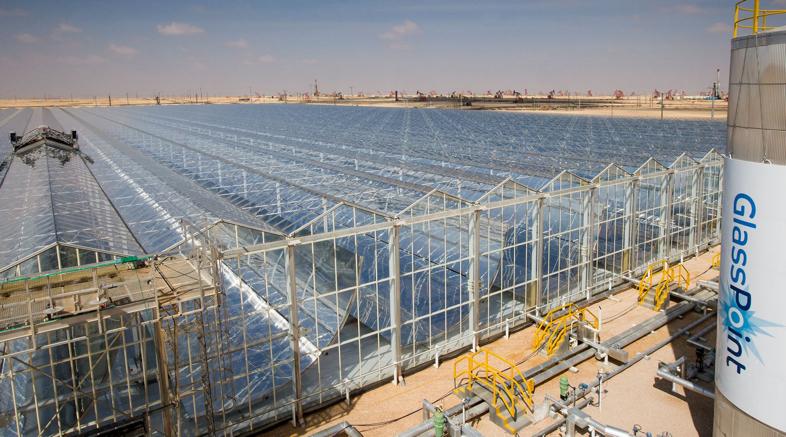 While GlassPoint has competitors, it's the only company that designed its technology to meet the specific needs of the oil and gas industry. One innovation sets GlassPoint apart: massive greenhouses are packed with 20-foot-tall rectangular mirrors that protect them from the desert's high winds and dust. There are several documented examples when the mirrors performed perfectly during a huge dust storm. Afterwards, special automated window washers quickly removed any traces of the storm by the next day.

That feature allows GlassPoint to avoid many of the high costs of traditional concentrated solar power: specifically, outdoor foundations made with expensive structural steel and concrete to withstand strong winds. Instead, GlassPoint is free to use cheaper, thinner mirrors and about half the amount of steel. 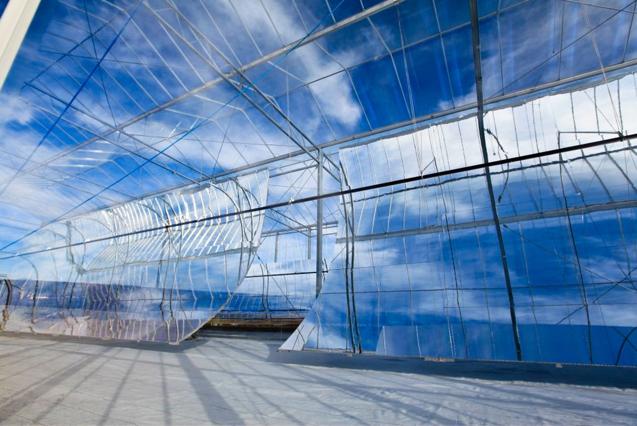 Brightsource, another early solar EOR developer, took the more expensive route when it built a 100-acre steam generating system for Chevron California. It caught the sunlight on free-standing heliostats, which then focused it onto a 300-foot-tall water tower. That method never seriously considered the weather in Oman, where strong winds would constantly cover any exposed mirror with sand.

So here's Rod MacGregor’s pitch to Oman in a nutshell: GlassPoint's unique, simple and cost-effective technology can reduce oilfield gas consumption by up to 80%. PDO bought the pitch and when Miraah is up and running, Oman will be able to redirect its remaining gas reserves for power generation, desalination, and industrial development — all crucial for future growth of the country. The report's most impressive statistic was:

The use of solar energy... saves up to six times as much gas per unit of capital
expenditure.

Much of the easily recovered oil is gone

GlassPoint finds itself in the sweet spot of a major trend. Much of the world’s easy oil has already been recovered. To maintain production, oil companies are increasingly moving to enhanced oil recovery (EOR), which is becoming prohibitively energy intensive. Typically, for every five barrels of heavy oil, the energy equivalent to one barrel is consumed in the production process. This technique is also used in 40 percent of US EOR production, which is mostly in California.

The company is targeting more large-scale deals. “Its value is way over $100 billion, but that’s just a snapshot, and it’s growing very quickly,” MacGregor told Bloomberg by phone.

MacGregor also told Bloomberg that areas where the technology could be used include western China, Madagascar, parts of Venezuela, California, and the Gulf region. He also added, "We have a very healthy pipeline of giant projects. We’re in discussions with pretty much every producer of heavy oil in the world."

Miraah will dwarf all other solar EOR installations. The completed project of 36 greenhouses and supporting infrastructure will sprawl over three-square kilometers, equivalent to more than 360 football fields. The original 7-MW plant will continue to operate alongside at Amal.

Built and commissioned in successive modules of four, the project will break ground this year with steam generation from the first module in 2017. Once complete, Miraah will deliver more energy than any other solar plant in the world. It will reduce carbon dioxide emissions by over 300,000 tons annually, the equivalent of taking 63,000 cars off the road.

According to a report Ernst and Young wrote for the Sultanate, GlassPoint plans to build much of the technology in Oman, which will instruct local engineers in solar technology, helping them build on skills learned in the oil and gas industry.

Is the solar EOR market as big as MacGregor insists?