The Society for Biological Engineering (SBE) Symposium on "20 Years of Metabolic Engineering: Foundation of a Bio-Based Economy" celebrated the rapidly growing field of metabolic engineering in an exciting forum consisting of esteemed speakers from industry, government, and academia, followed by an open group discussion.

MIT's Gregory Stephanopoulos, widely considered to be one of the fathers of metabolic engineering since his 1991 publication (hence "20 years"), chaired the symposium, introduced the conceptual basis, and briefly stated the rationale for why the field has such enormous implications for present day challenges in materials, chemicals, and renewable biofuels production. 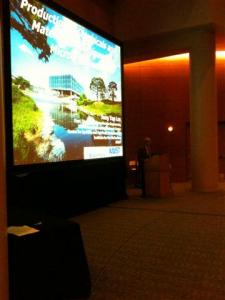 Stephanopoulos kicks off the symposium

Metabolic engineering is the principle that living organisms (usually bacteria or other simple, single-celled organisms) can be modified to produce desirable products such as polymers and fuels. Most commonly, this modification is performed by altering existing metabolic pathways or introducing new ones through genetic manipulation. The metabolic engineer (often a chemical engineer by training) is concerned with this network level of metabolic pathways rather than single chemical reactions.

Sang Yup Lee of KAIST introduced some key concepts of metabolic engineering, including the measurement and optimization of molecules as they move through microorganisms. This "flux" is important because it ultimately determines the efficiency, or "yield", of the end product. Sang Yup repeatedly used the phrase "kill off" to describe what metabolic engineers must do to many of the naturally existing pathways in E. coli, which are designed to degrade, inhibit, and reabsorb the very product they've been engineered to spit out. From naturally existing products such as polysaccharides and peptides to products traditionally derived from petroleum such as synthetic polymers and fuels, there seems to be no limit to what can be manufactured through metabolic engineering in an academic context. Sang Yup gave teasers into the possibilities of engineered sugars that have double the yield of sugarcane but won't affect sugar prices for consumers, and redesigned E. coli that can internalize metal particles and synthesize quantum dots for use in cutting edge qLED TVs.

But the resources and optimal conditions available in an academic laboratory setting that facilitate the perfect product are not feasible in a business context. Patrick R. Gruber, the scientific founder and CEO of Gevo, Inc., touched on what is possible and discussed many of the high demands, in terms of product performance and costs which must be met for metabolically engineered products to compete with products from the petrochemical industry.

Other panelists included Terry Papoutsakis of the University of Delware, Chaitan Khosla of Stanford University, and Eric Toone of the Advanced Research Projects Agency - Energy (ARPA-E). Toone shared an overview of some of the federal funding initiatives that will be instrumental in the early stage support of these exciting technologies.

Great post! Sounds really interesting - I wish I had been there! The great thing about research is that, perhaps it isn&#039;t feasible now for mass production, but the incremental steps forward are just as significant as the leap into commecialization.