This post is presented by SBE, the Society for Biological Engineering, a global organization of leading engineers and scientists dedicated to advancing the integration of biology and engineering.

Heart attacks most often occur as a result of coronary heart disease, also called coronary artery disease. CHD is a condition where a waxy substance, plaque, builds up inside the coronary arteries, which supply oxygen-rich blood to the heart. The buildup of plaque can occur over the course of many years. Eventually, an area of aggregated plaque can rupture inside of an artery. This causes a blood clot to form on the plaque's surface. If the clot becomes large enough, it can mostly or even completely block blood flow through a coronary artery. If the blockage isn't treated quickly, the portion of heart muscle fed by the artery begins to die as the healthy heart tissue is replaced with scar tissue without the critical supply of oxygen.

This video helps to visualize what exactly takes place during a heart attack.

Native in the body is a protein called vascular endothelial growth factor (VEGF), a hormone-like substance which helps to promote angiogenesis, or the growth of new blood vessels.These additional blood vessels serve as pathways when increased blood flow is needed to supply oxygen to tissue. Tissue engineers have tried using VEGF itself to help stimulate the growth of blood vessels in patients. Clinical trials, however, have proven it unsuccessful. The protein had a tendency to diffuse out of the target tissue before completing its job. In order to maintain a therapeutic concentration in the target tissue, a series of expensive and invasive injections would be required--not quite an ideal scenario. 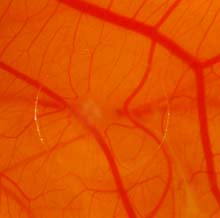 The transparent circle in the center of this image is a nanomaterial designed to mimic the protein VEGF.

Many different practices to help treat heart attacks have been practiced. However, a new, innovative way has been developed to accomplish this thanks to the work of Samuel Stupp and his colleagues at Northwestern University. According to a report in Technology Review, they have created a nanomaterial that could potentially help the body to grow much needed blood vessels and, in turn, take on the role of the body's native VEGF. This liquid, when injected into patients, forms a matrix of loosely tangled nanofibers, where each of those fibers is covered in microscopic protuberances which actually mimic VEGF. Similarly to using VEGF, this newly developed nanomaterial has a similar effect to using VEGF itself, but it lasts much longer. As an added bonus, it is completely biodegradable. Read the full story here.

Tissue engineering can open the doors to many opportunities in the medical world. There is hope for potential, as Stupp suggests, that these nanofibers can have many uses, such as stimulating the formation of connective tissues in bones and cartilage, or even regenerate neurons in the brain. Researchers will continue to work in developing this nanostructure to help combat the effects of heart attacks and to have more successful applications in the future.

What other applications do you think could result from this discovery?

Thanks for sharing - this is very promising and has lots of potential future application.