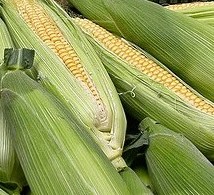 The race to replace fossil fuel created a media superstar.

American corn-based Ethanol captured the public's imagination. Cue the financial red carpet! Agribusiness, Wall Street and the Media conjured an Iowan Ethanol-rabia, and corn was king. Until a commodity bubble in 2007 and 2008 helped cause the infamous Mexican tortilla riots.

theather in Dubuque, survives with Federal trade protection from superior Brazilian sugarcane Ethanol, the gate-keeper power of the Iowa Caucuses, and inertia.

Maturing behind the scenes, a second generation of biofuels has been created from non-food crops, crop residues and waste. Kid, you're going out there an unwanted industrial byproduct, but you're coming back a star-- as a recent blog post reported on the biofuel created from the dross of the Scottish whiskey industry. 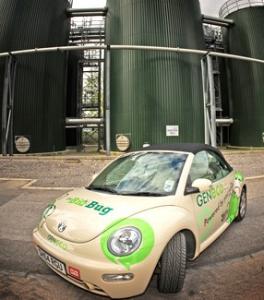 the Bio--Bug, a VW Beetle demonstration vehicle. GENeco engineers have taken something normally flushed and forgotten, the sewage from their treatment plant, and processed it with specialized equipment into methane gas. The methane powers the Bio-Bug engine, altered as easily as an LPG conversion. Two small tanks, located in the rear trunk, power the car for 200 miles, and the smell from the exhaust pipe is mild and inoffensive.

Mohammed Saddiq, lead engineer, figures the yearly waste, flushed down the toilets of just 70 homes, generates enough biogas to run the car for 10,000 miles. And prior to this project, the company had been producing biogas to power the sewage plant, exporting any surplus to the national grid.

He is confident that once the trial data is analyzed, they should be able to convert their company fleet of 300 to 400 vehicles.

Would the sewage stigma keep you from buying a similar car?