Kauai is no fluke. While there are still many regions where solar can't compete with traditional baseload power, for islands like Kauai, which rely on expensive diesel-powered electricity, solar was an easy sell once it was paired with battery storage. Lyndon Rive, the CEO of SolarCity and now president of Tesla's energy division, proselytizes about the synergies of solar-plus-storage.

He aims his sales pitch directly at island utilities, the hostages of expensive imported diesel: "It makes perfect sense to convert every island out there right now to solar and storage," Greentech Media heard him tell an audience at the Energy Storage conference in Denver last month. He emphatically ended saying, "We are doing that."

He knows what he's talking about. It turns out that island microgrids make up 36 percent of Tesla's deployed storage, according to Bloomberg New Energy Finance. Since 2016, when its grid-scale Powerpacks were first introduced, the company has shipped them to five islands. Four are scattered across the Pacific: Kauai and Oahu in Hawaii, Ta’u in American Samoa and Monolo island in Fiji. The fifth is off the coast of North Carolina, where Tesla’s first-generation Powerpacks in a solar-plus-storage configuration support the island’s 3MW diesel generator.

They came because after adding the costs for diesel generators, fuel (with its hefty shipping charges) and transmission grids, customers paid 32 to 65 cents a KWh. That was three to five times mainland prices, where gas turbines were about 7 cents per kwh, offshore wind 22 cents, and solar 14 cents. Now those prices are even lower.

He wanted the islands to follow Aruba's example (a very early adopter), which had invested $300 million to build a 30MW wind farm and a solar facility, and eventually reduced diesel imports from 3,000 barrels a day to 1,700, saving $50 million a year.

Under the aegis of his Carbon War Room (an environmental group he co-founded) and the Rocky Mountain Institute, Branson proposed the 10 Island Renewable Challenge to get islands to switch off diesel. His pitch was simple: reduce greenhouse gases, create energy security — and save money.

Since solar's high upfront costs were impeding adoption by cash-strapped countries, the 10 Island Challenge worked with the World Bank to earmark $300 million for island projects.

Branson's Necker Island became the Challenge showcase, which, like every other small island in the Caribbean, also used diesel generators. He announced that, "What we hope to do is use Necker as a test island to show how it can be done."

Within three years, there was enough solar, wind, and battery backup to provide 80% of the island's needs, which will evolve into his goal of 100% adoption.

The utility needed Tesla's storage because it already had so much solar on sunny, cloudless days, peak load was made up of 90% renewables, with 70% from solar alone. During the middle of the day when there was low demand for electricity, KIUC delivered 100% renewables to the grid. 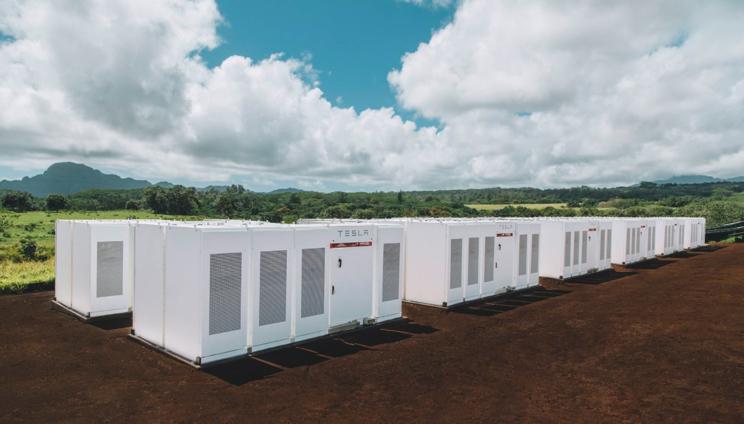 The utility needed Tesla's batteries to add enough new solar to store energy as residents returned home and turned on lights and appliances each evening.

The 52 MWh battery system can feed up to 13 MW of electricity to the grid, reducing the amount of peaker power needed.

KIUC is paying Tesla 13.9 cents a KWh hour, one of the lowest costs for solar coupled with storage. Importantly, it's cheaper than energy from some of the older fossil fuel generators.

Tesla was also able to take advantage of another round of plunging solar panel costs; battery costs dropped too, coming directly from the Nevada Gigafactory.

Another milestone in Kauai

When AES sells the power from its 28 MW of solar and 20 MW, five-hour duration batteries for 11 cents a KWh, it will generate 11 percent of the island's electricity and push renewable penetration above 50 percent, according to KIUC President David Bissell in a press release.

Remarkably, the low cost also beats older solar-only installations on the island. Bissell added, "It's remarkable to obtain dispatchable solar backed by a battery system at about half the cost of basic direct-to-grid solar project a few years ago.”

As this plant logs thousands of operating hours, easily replacing more expensive fossil-fueled peaker plants, Tesla and AES will be able to make the case for solar-plus-storage in more price-sensitive markets on the mainland.

Solar plus storage is spreading to Asia. Zinc-air battery manufacturer Fluidic Energy has received a US$20 million investment to fund projects throughout the archipelago of Indonesia from investors that include the Asian Development Bank.

The company claims to have installed more than 100,000 batteries, including 22MWh in 96 solar-plus-storage projects, which moved 100,000 Indonesians out of energy poverty. The battery maker is now planning to deploy 45MWh to rural Madagascar, giving 400,000 more people access to energy for the first time.

Fluidic CEO Steve Scharnhorst told Energy Storage News, “We focused much of our strategy on Asia simply because there was a problem that we knew we could help fix.”

He sees huge potential anywhere there is a high percentage of diesel generation aggravated by dysfunctional or nonexistent grids.

Is Tesla's island solar-plus-storage a roadmap for the future?