Ten years ago, before the golden age of baseload nuclear and coal power came to an end, German utilities (all utilities for that matter) could add new power, risk-free, simply by tracking growing demand. Compared to the myriad logistical problems upsetting today's grid, it was all very rote: simply following population and manufacturing growth trends guaranteed satisfied customers and investors.

But that was before Fukushima and Germany's Energiewende, and certainly before crashing solar prices and gigantic offshore windfarms birthed capacity-enhanced 7 and 8MW wind turbines.

Now so much wind and solar swamp the grid that operators are forced to curtail a rising tide of excess green power. Germany may be building new HVDC transmission to transfer that northern wind to steelmakers and car builders in the south, but, according to Greentechmedia, in 2014 1,581 GWh of green energy were curtailed, a 300 percent increase from the previous year, and the problem's just getting worse.

This rampaging green energy can knock out transmission systems and cause blackouts, before eventually surging into defenseless, neighboring Austria, which has to cope with up to 2,000MW of unwanted power every day. That's always a mismatch because Austria's power market is a tenth of Germany's 600TWh a year.

So, realistically, if Germany expects to meet 50 percent of its power demand from renewables by 2030, and 80 percent by 2050, the system can't fritter away green energy. That leaves one choice: massively deploying storage beyond today's popular lithium batteries. “We’ll need a variety of storage technologies for everything up to days and weeks,” Germany's Secretary for the Environment explained to Siemens.

Now Germany and Austria are taking steps to convert that excess into hydrogen that can be stored and then used to power fuel-cell transportation - including trains - and also eliminate coal in steelmaking. Fortunately, Siemens, which has 64 percent of the offshore turbine market in Europe, has perfected a technology to tame the energy its turbines have unleashed.

In Germany alone, reported eenews, by 2015 there were two dozen green hydrogen facilities experimenting primarily with alkali electrolyzers. One of the largest was launched by the automaker Audi together with ETOGAS and EWE in Werlte, Germany.

Started in 2013, it draws CO2 from a biogas facility, mixes it with hydrogen and then feeds the finished fuel into the local gas grid for distribution to filling stations that sell compressed natural gas for its A3 g-tron vehicles. The 6MW plant ramps up in five minutes to also send power into the secondary balancing market.

E.ON, another German utility, has had a power-to-gas demonstration project in the village of Falkenhagen, east of Berlin, where the hydrogen is fed into the gas grid and then sold to natural-gas customers.

But Siemens' new proton exchange membrane (PEM) electrolyzer, which can convert electricity into hydrogen in milliseconds, is becoming the go-to device to absorb rapidly shifting wind speeds, something Audi's Werlte plant can't do.

2015 was a watershed year when Linde AG, the world’s largest industrial gas supplier, opened its Energiepark Mainz to convert wind power and water into gas. Siemens supplied the park’s guts - the PEM-based high-pressure electrolysis system - made up by three 2MW units, with a peak of 6MW. The energy park is large enough to prevent bottlenecks in the local distribution grid, while stabilizing the power supply from four nearby wind parks (read press release).

After years of research on its new PEM system, Siemens had reduced costs from €10,000 per kW to well under €2,000. When the Energiepark opened in 2015, it was the largest system of this kind and refinements lowered costs to well under €900.

Incidentally, since the energy park's components had to work seamlessly together, Linde, responsible for purifying, compressing, and distributing the hydrogen, installed its ultra-efficient ionic compressor (eliminating mechcanical parts) to ensure complete operational flexibility.

Meanwhile, Linde, Royal Dutch Shell, and Daimler were rolling out a network of hydrogen refueling stations across Germany, which used hydrogen delivered by tanker trucks from Mainz.

Siemens says that a soon-to-be-delivered 60 to 90MW electrolyzer will support much larger 100MW wind farms.

Fuelcell-powered cars may never take off, but Siemens still wants to push hydrogen into all parts of the grid. Its R&D department has developed enough new technology to do it. For example, utilities will eventually burn green hydrogen in modified combined-cycle power plants, completely eliminating CO2 emissions.

At the moment, power plant turbines still can't burn pure hydrogen, but Siemens has promised that it will become a reality by 2018. So even though about half of the energy produced by wind is lost during electrolysis and turbine combustion, wind turbines would no longer have to be shut down, which creates further decarbonization and increased capacity.

Two real world demonstrations will also eliminate hydrocarbons, one for rail, which is booking future orders all over Germany, and the other for steelmaking, which just received a grant form the EU. 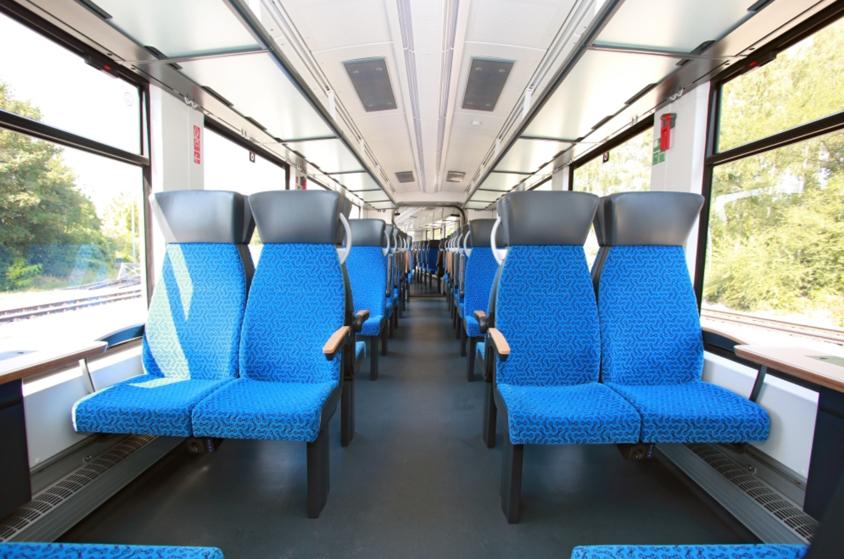 Later, extended tests will be conducted in Germany and the Czech Republic before the new train makes its first scheduled passenger runs in 2018.

Unveiled to the public last December, the Coradia iLint, which is the world's first fuel-cell-powered train, uses hydrogen stored in tanks large enough to fuel a 497-mile journey. Producing only steam as a by-product, the motor runs far more quietly and cleanly than a diesel engine. During a trip, unused energy is stored in lithium batteries attached to the car bottom.

The iLint has been designed for shorter, slower stretches of track that electrification may never reach, in this case, a 60-mile link between the city of Buxtehude, lying outside Hamburg’s suburbs, and the small port and beach town of Cuxhaven.

Since the rollout of the hydrogen economy isn't perfect, Alstom has to use waste hydrogen from the chemical industry because there are still so few sources that aren't already committed to autos. But keep in mind that Germany's existing electric trains get a percentage of their power from coal power plants, which make the Coradia a greener option.

Since waste stream hydrogen is usually burned, using it - which is called carbon capture and utilization (CCU) - doesn't place a burden on the environment.

Of course, when you add hydrogen, infrastructure looks like a big hurdle. To make the transition to the new Coradia iLint as painless as possible, Alstom offers a complete package: the train, hydrogen fueling terminals on each route, and, of course, and maintenance.

The holy grail of heavy industry

Steelmakers have a problem. Over the years, blast-furnace performance has been improved to the point that carbon (coal) consumption is at a theoretical minimum.

Hydrogen-based steel production is now the holy grail for steelmakers looking to decarbonize. That's because after electricity generation, iron and steelmaking produce the most greenhouse gases, with cement a close third.

He thinks it will take 20 years because - just like for the Alstom iLint - massive amounts of green energy that won't exist for decades.

Nevertheless, Voestalpine will build hydrogen production into its steelmaking plant in Linz, Austria. The green hydrogen will be fed directly into the steel plant's internal gas network, which will allow the gas to be tested in various stages of steel production.

Ultimately, success will show industries like cement, ceramics, aluminum, and glass - all energy hogs - how to decarbonize.

Currently, several other steelmakers are racing to decarbonize. According to to the Financial Times, Posco of South Korea and Sweden’s SSAB have also launched early-stage programs to develop hydrogen-based steelmaking, but, like Voestalpine, they're far from commercial reality.

When will hydrogen take over the grid - by the end of the century?