Deepwater's CEO Jeff Grybowski struggled for ten years to develop Block Island, even though he had the inside track as the former chief of staff to former Rhode Island Gov. Donald Carcieri (R), and the backing of President Obama. Still, he waited until 2013 to win the federal government’s first competitive offshore wind energy lease auction. It took another year before the feds officially granted Deepwater Wind right-of-way.

But the big challenge for Grybowski was pulling together a global supply chain because no one was making or installing offshore turbines in the US.

Fortunately, offshore wind exploded in Europe. There wasn't a single wind turbine in the water until 2002, when Denmark commissioned the world’s first 160 MW offshore wind farm. Afterwards, boosted by favorable subsidies and improving technology, by 2016 there were 11 GW of power flowing onshore. At the same time, a specialized industry sprang up to design, build, and maintain the hundreds of turbines installed every year.

While Grybowski was waiting to get his project off the ground, Europe's offshore turbines grew from 3.5 MW to 6 and 8 MW. Eventually, he choose to go with General Electric's 6 MW Haliade turbine.

The race to boost capacity — one way to drive down costs — caused GE to reduce the weight of its new 6 MW Haliade nacelle by removing the heavy gearbox found in smaller turbines around the world. Engineers added a direct-drive generator with a permanent magnet rotor instead.

The direct-drive turbine, developed by Alstom before the French company merged with GE, was designed to thrive in a windy marine environment. The turbines are 170 meters tall and have blades that are 150 meters in diameter and are among the largest in the world. They are so large that no US lift ship could have installed them.

All of the the heavy lifting — hoisting 400-ton nacelles to the top of towers and attaching the 74-meter blades — had to be done using a special European jack-up, the Brave Tern on loan from Fred. Olsen Windcarrier. 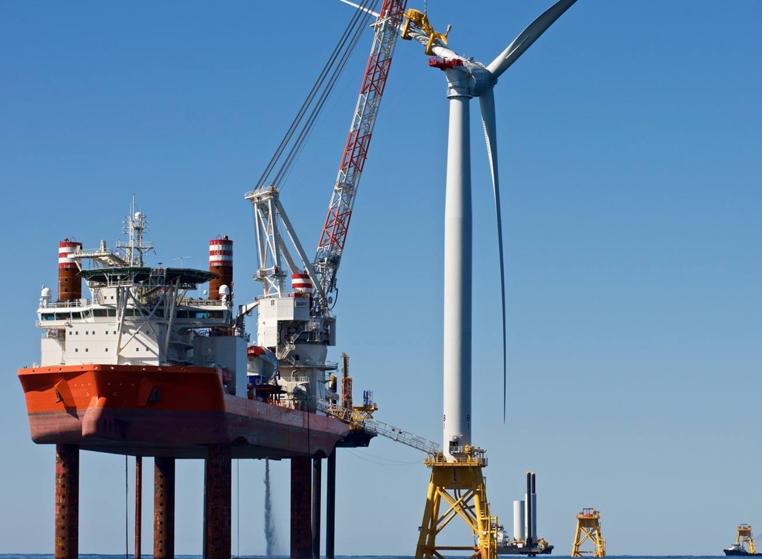 First, the Brave Tern spent two weeks shipping the nacelles 3,300 miles to Rhode Island, where they waited onboard until installation. A second vessel transported the large turbine blades made by Danish firm LM Wind Power — the world’s largest independent supplier — from the Port of Esbjerg in Denmark. A third vessel delivered the sections of the five white steel towers from Aviles, Spain.

At 433 feet, the Brave Tern is longer than a football field. From the vessel's deck, its crane easily lifting the 400-ton nacelles, steadied by a GPS-guided jet propulsion system. Since 2012, the ship has been used to install 200 offshore wind turbines in Europe.

Today, with the installation complete, as blade tips arc 600 feet above Block Island, the wind farm can generate up to 30 MW of electricity. This abundant power allows the local utility to shut down its expensive diesel generator and cut electricity rates nearly in half.

Grybowski says the farm will also lower carbon emissions by an estimated 40,000 tons a year. He's also confident that “Offshore wind can power much of the US East Coast, not least in the Northeast, where the wind is strong."

Even more importantly, since the island never uses more than 4 MW, which is the peak load during the busy summer, surplus electricity streams by underwater cable 13 miles to Rhode Island's mainland grid.

This means he's created a viable offshore business model, since most of the electricity used in the US is consumed in cities close to the ocean. And the underwater transmission cables avoid expensive, new transmission infrastructure from Canada or Marcellus shale.

Grybowski is riding a major trend. The federal agency in charge of offshore wind power siting — the Bureau of Ocean Energy Management (BOEM) — has already granted 11 leases to offshore wind developers in special “wind energy areas” along the Atlantic coast. These developers include American companies such as Deepwater Wind, as well as leading European developers like DONG Energy and Statoil. Overall, the DOE sees the potential to develop 86 GW of offshore wind power capacity by 2050, enough to power 31 million homes.

Offshore wind could spread throughout New England, then south to the mid-Atlantic states and eventually the West Coast, including California, Oregon, and Hawaii. The potential for US offshore wind energy is massive — over 4,000 GW, which amounts to more than four times the nation’s annual electricity production, according to the US Department of Energy.

Experienced European developers, who are eyeing the market, told Bloomberg that prices will quickly drop once they flood the zone. As an example, DONG Energy has already created the lowest costs in the business, winning a contract to develop two wind farms off the coast of the Netherlands for 7.27 euro cents a kilowatt-hour (8 US. cents).

So while companies like DONG bring their acumen to the US, state governments have been making big commitments to buy offshore windpower to supply large cities with strong electrical demand. Massachusetts Governor Charlie Baker signed a law last August that requires utilities to sign long-term contracts to buy 1,600 MW of offshore wind for the next ten years.

Shortly afterwards, Eversource Energy, a utility, said it's going to do business with DONG. Bay State Wind would be located 15-25 miles south of Martha's Vineyard in a deepwater area dubbed the "Saudi Arabia of Wind" for its potential to generate vast amounts of clean electricity.

Bay State Wind is DONG's first proposed US offshore wind farm. DONG, with annual revenues of around $11 billion, is a global leader in offshore wind power, with major projects in the United Kingdom, Germany, Norway, Denmark, and the Netherlands.

In the 50-50 venture, DONG Energy will be lead developer of the the offshore project, and Eversource will develop the necessary onshore transmission system.

New York’s Governor Andrew Cuomo, after committing to making offshore wind a key part of his plan to get 50 percent of New York’s electricity from renewable sources by 2030, recently announced he would shut down New York's 2 GW Indian Point nuclear power plant by 2021. Then, a day later, he announced a grand plan to build 2.4 GW of offshore wind by 2030.

Part of the solution, along with additional transmission and demand-side solutions, is New York's first 90 MW project 30 miles off the coast of Montauk, which will be supplied by Deepwater Wind.

Beyond that, Norway’s Statoil just won a bid to develop a much larger project. It could add up to as much as 800 MW of capacity. This would be the first installment in the 2,400 MW by 2030 called for by Gov. Cuomo, with details on how to get there to be fleshed out by an Offshore Wind Master Plan coming from the New York State Energy Research and Development Authority.