Sustainability Challenges in the Paper Industry 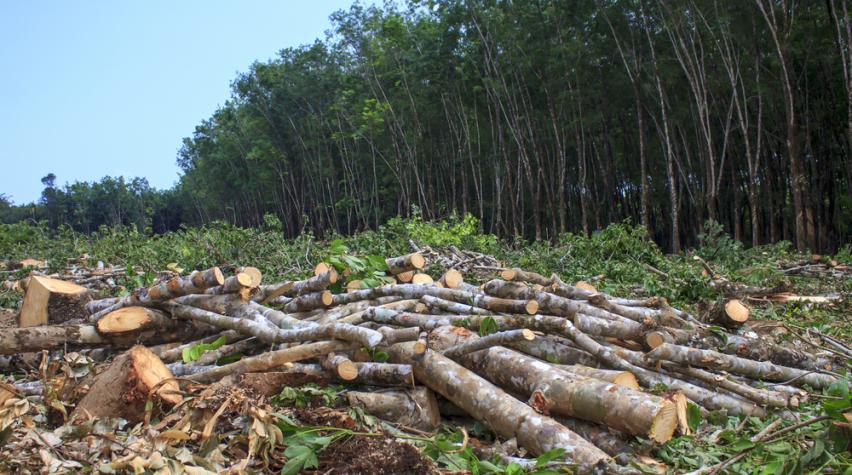 In 100 A.D., the Chinese used rags, hemp, grasses, and stone mortars to make the first paper. This was a relatively simple process that employed easily sustainable agricultural resources—so sustainable, the method continued on through various cultures up until the 1800s. Then, mechanization and the industrial revolution, as well as higher literacy rates and a greater demand for paper, initiated what would later become a part of our environmental sustainability crisis.

The business of issuing paper receipts, by itself, is a microcosm of the problem. Here are some statistics, courtesy of mobile payment company Square, on the environmental damage we cause by using receipts:

Environmental damage isn’t the only problem with receipts. Up until fairly recently, we had no idea as to the health effects of thermal paper. Thermal paper is the receipt paper used in cash registers, adding machines, and credit card terminals. The reactant acid in the thermal coating is bisphenol A (BPA).

In 1992, Stanford’s David Feldman discovered that BPA is an estrogenic molecule.  According to Newsweek, the majority of scientists that lead the field in BPA research agree it “plays a role in a litany of health concerns”, including cancer. The subject is still controversial, because the FDA and EFSA dispute the evidence.

Thermal receipts and the industry surrounding them are only part of the paper problem. The problem is we depend on paper, but it can be detrimental to the environment. According to the World Wildlife Fund, “Paper products are crucial to society, as they have enabled literacy and cultural development”—they also enable industry. Around the world, mills produce about 400 million tons of paper per year. This creates jobs but contributes to deforestation.

Coniferous and deciduous trees are the primary pulp and paper sources, but companies don’t just do their logging in temperate regions where pine forests thrive; according to the Encyclopedia of Occupational Health and Safety, companies also harvest in tropical and boreal forests.

According to the Bureau of Labor Statistics, the paper and paper products industry currently employs over three-hundred thousand people in the US alone. That doesn’t account for the number of people who work hand-in-hand with the paper industry, their work in part dependent upon paper production. The publishing industry (excluding internet) employs over five-hundred thousand people, the trucking industry, which transports paper all over the country, employs nearly half a million.

Paper is a big part of how we live. But to what extent is the paper industry responsible for harmful deforestation? What are industries that rely on this resource doing to promote environmental sustainability?

Worldwide, deforestation is estimated to be responsible for about 12% of greenhouse gas emissions. Forests house carbon in wood, leaves, and soil. When loggers and developers cut down forests, CO2 escapes into the atmosphere. A deforested area can’t absorb and store any more CO2. Furthermore, animals and indigenous people who once depended on forests for life can do so no longer.

The Union of Concerned Scientists points out that “wood products,” including paper, account for about 10% of total deforestation. Cattle, soybeans, and palm oil are the other major culprits.

The tale of deforestation from pulp mills and paper production is a complex one, and a number of developments are mitigating the loss of forests due to paper. In 2014, a coalition of more than 180 governments, corporations, indigenous peoples’ organizations, and nongovernmental organizations signed the New York Declaration on Forests (NYDF). Goal 1 for the NYDF is to end natural forest loss by 2030. As a watermark, the coalition is aiming for 50% reduction of deforestation by 2020. Its goals align with those of the Paris Climate Agreement, which, in order to go into effect, needs 55 nations that cause 55% of global emissions to cooperate.

NYDF’s Goal 2 is to stop deforestation caused by the private sector. The paper industry doesn’t figure into the deforestation issue as prominently as the palm oil, soy, and beef industries, because about half of the forests providing wood for paper are under “sustainably certified production.” Together, the Forest Stewardship Council (FSC) and the Programme for the Endorsement of Forest Certification (PEFC) examine pulp and paper industry practices, primarily in North America and Western Europe. They then analyze whether or not industry practices meet sustainable forest management standards.

Sustainable forestry is all about silviculture, which includes proper management, reforestation, growth and nurturing of forests. The standards for this sustainable practice were set at the 1992 United Nations Conference on Environment and Development. Private landowners in the US, who own about 56% of the forestland, have been very successful at following sustainable forest management practices. A combination of strictly enforced state and federal forest management laws, as well as landowners’ voluntary compliance with Best Management Practices, have helped the US maintain 766 million acres of forestland. That’s the same amount as there was one-hundred years ago.

In addition, American companies who have a stake in the paper industry are lining up to support sustainability efforts. For example, document shredding service Shred Nations reports that the average office worker wastes 1.5 pounds of paper per day. The company advocates for purchasing recycled office paper, which lessens carbon footprint by 5 pounds of CO2 per ream, reduces water pollution by 35%, and makes for 74% less air pollution than non-recycled paper.

Others, such as sign company MegaPrint, are committed to sustainability in their day-to-day operations. Solar panels take care of two-thirds of their power needs; they use soy-based inks and are committed to recycling and reusing paper scrap, boxes, and rolls. Regrettably, this doesn't take into account the soybean industry’s culpability in deforestation. According to the NYDF’s research, only about 2.1% of global soybean production is certified sustainable.

On the global scale, three-quarters of the certified sustainable forest areas are in North America and West Europe. Specifically, Indonesia, Thailand, and Malaysia do not have certification programs in place. Organizations such as Greenpeace and the Rainforest Alliance have targeted bad actors in the paper industry who take advantage of the lack of regulation, such as Asia Pulp and Paper (APP).

After years of felling forests in Indonesia, destroying ecosystems for endangered species such as the Sumatran tiger, and displacing rural communities, in 2013 APP finally caved to environmental activism and announced their “Forest Conservation Policy.” But before that, they deforested 4.2 million hectares of rainforest. Indonesia’s second-biggest paper maker, APRIL, refuses to adopt such a policy and decimates about 600,000 hectares of tropical forest a year. Additionally, in Indonesia, Greenpeace reports that 76-80% of logging is illegal.

Bad actors do illegal logging because the demand for paper is so high. For APP, there’s concern that supply will not meet demand under the company’s new zero deforestation policy. WWF’s assessment of the situation provides context. After APP pledged an end to deforestation, the company opened a new pulp mill in South Sumatra. APP has promised that the entirety of its pulp fiber supply will come from plantations. But the company only has this figured out up until the year 2020. Under current estimates, the amount of plantation supply will fall short of APP’s needs by at least 3 million cubic meters.

All told, the UCS reports that only 2% of tropical forests are certified sustainable. And the demand for paper will increase faster than any other wood product—by 2060, paper consumption will double from where it is now, at minimum. If sustainability efforts don’t increase in tropical regions, we can expect to see more environmental degradation, destruction of animal ecosystems, and displacement of citizens.

The future of forests

Can those employed by the timber, pulp, and paper industry keep their jobs with zero deforestation policies in place? In order to hit the Paris climate agreement’s goal, which is to keep global temperature from rising more than 2° C, the entire paper industry will need to follow sustainable forestry initiatives much like those in the US. It will need to rely a great deal on plantations for supply.

According to the UCS, multispecies plantations have a higher yield, quicker growth rates, and a better overall economic return than monocultures. The multispecies plantation may be a solution for the paper industry in the future. With Brazil onboard the climate change agreement, and already getting its pulp supply from plantations, the focus is turning to other developing nations, such as Indonesia. Increased advocacy for sustainable practices will determine whether sustainability is the priority for developing nations in the future.

Daniel Matthews is a widely-published freelance writer, and a social worker for Lifepath Idaho. You can find him on Twitter.