Environmental scientists have been monitoring Chesapeake Bay's dead zone creep for decades. The barren sea floor samples dredged up in this 2008 video may look bleak, but since then cities working with federal and state agencies have started to arrest the Bay's decline.

Unfortunately, progress has been slow because development fueled by population growth has pushed back against solutions.

Memories are seared by images of more than 100,000 fish floating belly up near Baltimore, in the biggest die-off of the year.

Studies suggested that algae was the culprit, according to Jay Apperson, spokesman for Maryland's Department of the Environment. He'd already fingered algae for many of the 80 smaller die-offs that year.

Apperson emphasized that high levels of nitrogen and phosphorus create algae blooms; for decades, both chemicals have pushed Chesapeake Bay and its tributaries to the brink, as they seeped from wastewater treatment plants, and washed along with fertilizer from farmland, suburban lawns, streets, and parking lots.

Patricia Glibert, from Maryland's Center for Environmental Science and an algae specialist, put the big die-off on a timeline, "These are happening with greater frequency."

To get ahead of the problem, Baltimore is finishing a $500 million upgrade to its Back River Wastewater Treatment Plant. That includes installation of one of the world’s largest nitrogen-removal filters, along with a dozen clarifiers, six large activated-sludge reactors, and new pump stations. (Watch a worksite photo essay.) 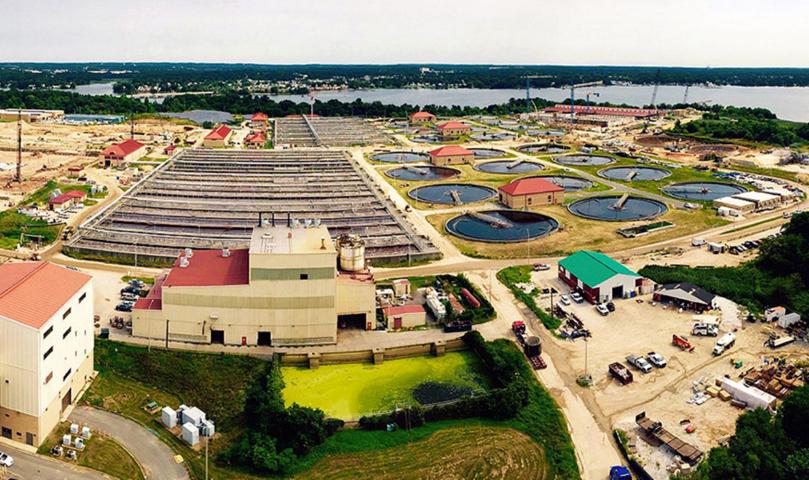 This project is so large that crews excavated nearly one million cubic yards of earth, poured 225,000 cubic yards of concrete and embedded 7,500 16 inch auger-cast piles for the foundation. Crews also installed 14 miles of underground pipe, 26 miles of interior pipe and 13 miles of buried duct banks.

When the project comes online in November, it will push plant capacity to 270 mgd from 180 mgd, while reducing nitrogen dumping to 3 mg/L per day from 8 mg/L. Apparently, phosphorus levels will remain the same at 0.2 mg/L. (Watch a general denitrification overview.)

Getting that deep reduction required a massive, new 250 ft by 350 ft nitrogen filtration system, with 52 filter cells, each 100 ft long and 30 ft deep. Sand-bed filter technology was chosen, Per Struck, the design consultant's rep, told ENRMidAtlantic, to “add on at the end of the existing treatment process.”

The project's size remained a problem. Shane Lippert, area manager for Archer Western Contractors, said materials couldn't "be manufactured fast enough.” For example, sand deliveries for the filtration system had to start in December 2013, when excavation was underway. Nearly 1,100 truckloads will have delivered 4,900 “super-sacks” of sand filter media; each sack measures 3 ft by 3 ft by 3 ft. “We have those [sacks] tucked all over this site,” Lippert added.

Waste treatment is part of the good news coming out of the Chesapeake Bay watershed. On the positive side, pollution flowing into the Bay from sewage treatment plants is declining. However, the bad news is that pollutants carried by stormwater runoff are on the rise.

Since 1985, wastewater nitrogen releases decreased by 75 percent and phosphorous by 57 percent. In 1985 facilities discharged 89 million pounds of nitrogen into the Bay. By 2015, it was just 38 million.

NASA reports that wastewater plants are actually a decade ahead of the pollution-reduction goals established by the EPA. Those gains are notable because the Back River Wastewater Treatment isn't even online yet.

Nevertheless, cities and suburbs pose a growing challenge to the Bay. Like many cities, Baltimore is widely covered by buildings, roads, parking lots, and sidewalks — all impervious to rain. Meanwhile, natural spaces like forests, wetlands, and parks, which can act as sponges soaking up flood waters and pollutants, are increasingly rare.

The problem of stormwater runoff is particularly acute and complex in Baltimore because of the city’s long history as an industrial center. Large industrial sites (some active, some abandoned) are common in parts of the city. Sparrows Point, once a Bethlehem Steel factory, remains one of the largest impervious surfaces in the city. 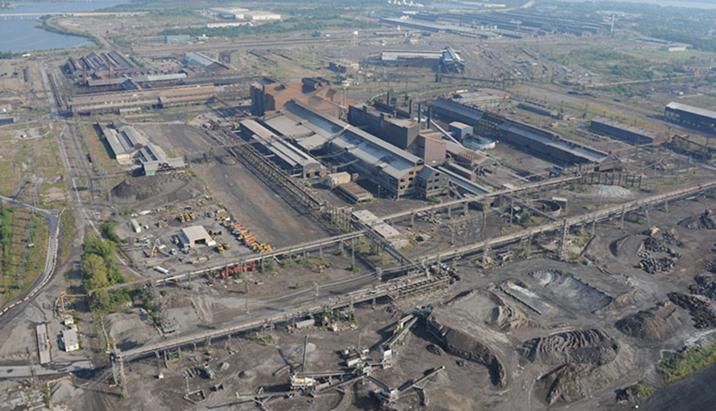 The pavement, asphalt, and other water-resistant city armor act as conduits and sources of pollution. When rain splatters on roadways and other hard surfaces it flows rapidly toward gutters and urban streams, picking up nitrogen, phosphorous, and free-riders like oils, salts, heavy metals, pharmaceuticals, and other pollutants. The rapid flow also erodes urban stream banks and sends large amounts of sediment pollution all the way to the Bay.

Rising population is tied to rising stormwater pollution. “In 1985,13 million people lived in the Chesapeake Bay watershed. Today, it is 18 million,” said Peter Claggett, a geographer with the USGS, who uses satellites to track land use. That's because “impervious surfaces have increased about 10 percent per decade.” 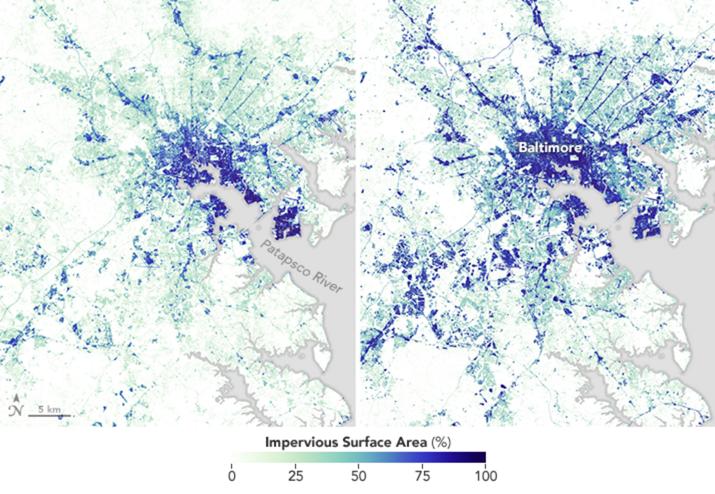 A map based on Landsat data  on the left shows impervious surfaces in 1984; the right shows them in 2010, widely expanding in the city center and the suburbs.

But there is another, hidden stormwater runoff problem. Lawns, which always appear sprinkler/rainwater-friendly, are only partially permeable. In a hard rain, they typically add runoff — especially compared to forest areas with decomposing vegetation. And just like farm crops, over-fertilized lawns dump nitrogen and phosphorus in waterways.

“There is more turf grass than there is corn in the Chesapeake Bay watershed, so lawns can make a difference,” said Claggett, who has determined that about 9.0 percent of the watershed is turf grass — 3.8 million acres of land.

Overall this is a huge problem. It covers 35.9 percent of the land in Baltimore County. 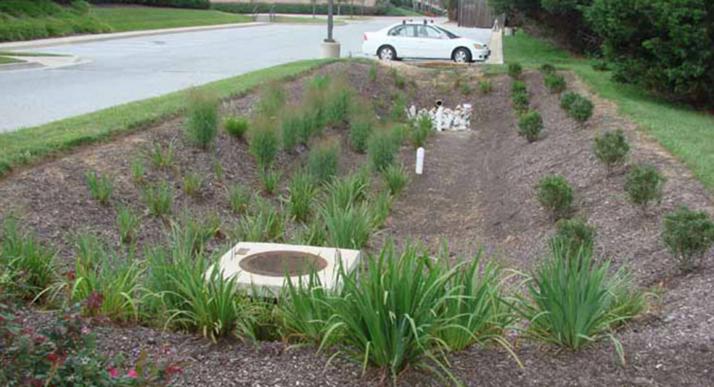 City planners are installing low-tech infiltration strips, sand filters, rain gardens, and green roofs, which all slow down and allow stormwater to percolate underground and filtering out pollutants before they reach the Bay.

Beyond that, Claggett is happy seeing people leave the suburbs and move back to the city. “Rural subdivisions and big-box retail stores once contributed to high footprints, but there seems to be resurgence of townhouses and condominiums in urban areas,” he said. These mass transit-centric areas have a positive effect on water quality.

Is pollution too complex for the average voter to understand?