It's all hands on deck for the monumental task of decarbonizing the world energy system, and some speculate that may take a decade shy of the next century before it's complete, if ever. It turns out that reining in emissions from stationary energy facilities, like coal or gas-powered plants, will be easy compared to curbing emissions from moving targets like aviation and shipping, which is starting to look nearly impossible.

A new video makes the problem clear: Every day 100,000 airline flights take off and land at airports across the world (watch the video above). Constantly moving air traffic means that no single person or group can manage the flow surging around the globe with the velocity of a plot from a Jason Bourne movie, floating over time zones, leaping national borders, and skating past regulatory and legal jurisdictions.

Shipping is even worse. Huge container ships — powered by one of the world's dirtiest fuels — slip over the horizon, where they're ignored by everyone except aspirational Somali pirates, until they arrive in port to unload their cargo.

If these two transportation systems were countries — minus the free nuts and beverages —   they'd top EU pollution rankings, according to Yale 360, tossing off as much CO2 as the UK or Germany every year. But unlike climate-conscious countries, aviation and shipping's GHGs are out of control and rising dramatically.

The historic UN climate agreement should have capped their emissions growth. But after placing limits on power grid emissions, manufacturing, domestic transport, and deforestation, the international bad boy industries of aviation and shipping slipped free to continue their CO2-fueled joyride.

They'll elude regulatory oversight (like The Wild Bunch desperados slipping into Mexico to avoid a US posse on their trail) because far-flung supply chains will never be shoe-horned into national oversight regimes.

For example, which country should own the emissions from a Mexico City flight to New York, or a ship moving goods between Shanghai and Los Angeles? The country of departure, or arrival?

Don't even try to wade into the swamp of national flags or legal jurisdiction. It's all a deliberately designed game of Greek shipping tycoon whack-a-mole.

If ships and planes continue to operate beyond international control, the estimated acceleration of GHG growth is alarming. Trending along with rising population and the standard of living, these two slippery rogues will increase CO2 emissions from today’s 6 percent all the way to 40 percent by 2050.

Barring the technological rapture of a new miracle fuel (the Bill Gates model), there may be only one practical solution. The Environmental Defense Fund, Nature Conservancy, and Conservation International proposed carbon offsets, where polluters could put money into the UN’s Reducing Emissions program to support forest carbon sinks. These realistic NGOs called the approach “essential” to getting even close to CO2 stabilization.

In the meantime, some help is on the way as biofuels start to come online. Alaska Airlines recently took off from Seattle to San Francisco using a mixture of traditional jet fuel mixed with a 20 percent biofuel from fermented corn. 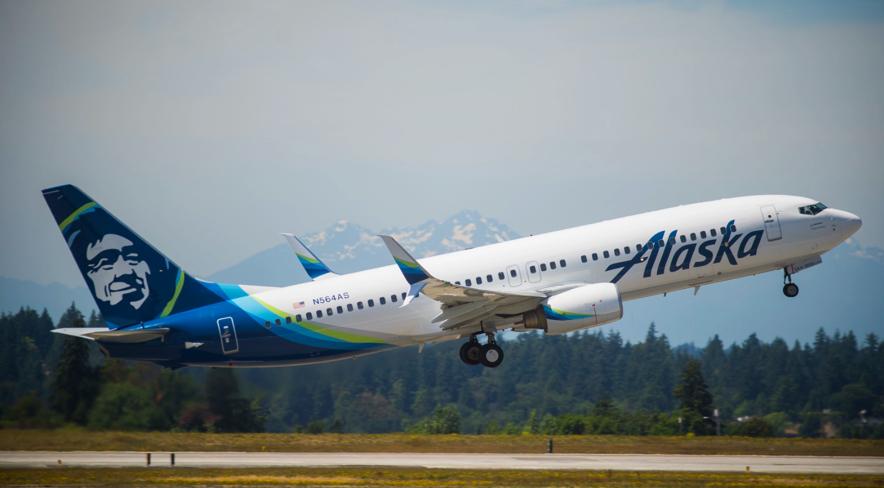 The biofuel was developed by Gevo, a company based in Englewood, Colorado (read the press release).

This latest innovation is part of an ongoing program at Alaska Airlines, which has flown demonstration flights with a variety of biofuels.

As far back as 2011, It was the first US airline to fly commercial passenger flights using a biofuel from reclaimed cooking oil and eventually flew 75 commercial flights between Seattle and Washington, DC.

Gevo's fuel comes from corn grown sustainably from seed to harvest. One of the company's Midwestern suppliers, Farmer David Kolsrud, started low-carbon farming only six years ago in 2010 in South Dakota using techniques to minimize the use of water, fertilizers, pesticides, and herbicides.

After the harvest he sells his non-edible corn to Gevo, "which separates out the protein for animal feed and converts the remaining starch to isobutanol." A second step turns the isobutanol into jet fuel. "This practice is a game-changer for farmers," said Kolsrud, "It allows us to extend our crop and create new jobs that didn't exist six years ago."

Alaska, with its goal of using bio-jet fuel from its primary airports by 2020, is also collaborating with Boeing and the Port of Seattle on a Biofuel Infrastructure Feasibility Study for Seattle-Tacoma International Airport.

And Alaska isn't the only airline experimenting with new fuel sources.

In March, United became the first US airline to use sustainable biofuels on a commercial scale.  The airliner's flights between Los Angeles and San Francisco are powered by a blend of 30 percent biofuel, produced by AltAir Fuels. United intends to gradually phase biofuels into every flight departing from LAX.

The shipping industry remains unsure about committing to curbing its emissions at all, even though estimates say its emissions will rise 250 percent by 2050 and could make up 17 percent of all global emissions.

Fortunately, there will be missions standards placed on new ships after 2019, but there are no plans to extend the standards to one hundred thousand working ships.

Despite industry-wide evasion, some individual shippers have made improvements. Danish shipping giant Maersk cut fuel use and CO2 emissions by 30 percent after mandating that captains of its container ships travel more slowly.

Maersk has also conducted biofuel trials of its own. Carnival has ordered the world’s first cruise ship powered by liquefied natural gas. And quixotic engineers are working on designs for solar-powered ships or even sails. But these innovations require widely adopted incentives — with global targets.

But milestones are popping up, like the Navy ship that just ran on 100 percent drop-in renewable diesel fuel for the first time. Developed by Applied Research Associates (ARA) and Chevron Lummus Global, the bio-diesel also reduced the ship's GHG emissions by 80%. 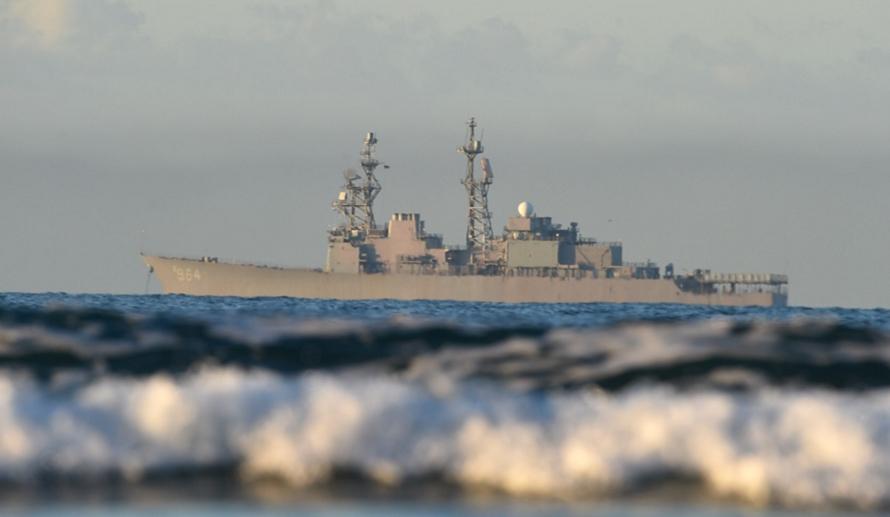 Its patented Catalytic Hydrothermolysis (CH) reactor technology utilizes water as a catalyst to quickly convert plant oils into intermediate oil products very similar to petroleum. The oils are then processed with hydrogen using CLG’s Isoconversion catalysts to produce drop-in jet fuel and diesel. Unlike most other process technologies, the renewable fuels produced by this process are 100 percent drop-ins. 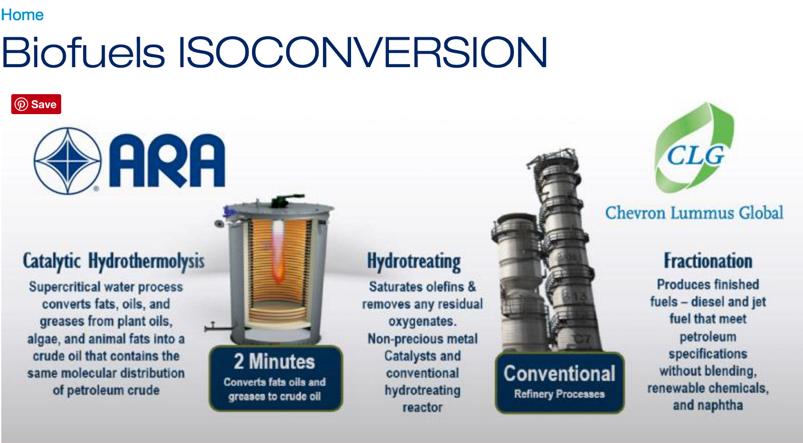 On the high seas

The recent test followed Navy protocol: prior to loading the 18,000 gallons of ReadiDiesel in San Diego, the ship's engineers monitored standard petroleum F-76 in the gas-turbine engines to get a baseline.

Afterwards, while running on 100 percent ReadiDiesel, the 12-hour cruise steamed from San Diego north to Port Hueneme, and ran through engine starts and speed changes. Afterwards, engineers confirmed that they hadn't observed any mechanical or operational differences compared to the baseline fuel.

This test thoroughly measured two metrics: first, verifying that ReadiDiesel is a suitable drop-in replacement, without blending or extra equipment or modifications; ultimately, the ReadiDiesel performed well enough to increase operational flexibility and give commanders more options in combat situations.

In addition to being compatible with current turbine and diesel engines, ReadiDiesel did not have to be segregated from petroleum counterparts. These fuels can utilize existing petroleum infrastructure without the need to build additional, costly infrastructure for blending, transportation, and storage.

Will shipping ever fall into line?