Once formidable, OPEC is taking a beating from US shale drillers two years after Saudi Arabia flooded the world with cheap crude trying to knock the upstarts out of the oil business. Reports of heavy trash talking from Scott Sheffield, CEO of Permian-based Pioneer Natural Resources, make it obvious that the multi-pad drilling, seismic data crunching, long-lateral extending frackers are still standing.

After narrowly avoiding a Saudi KO, Sheffield has turned around and taunted them, saying that Pioneer’s 800,000 acres in the Permian Basin are so economic that “we can definitely compete" toe to toe, head to head. (Read a profile of Sheffield.)

A hand mic snakes down to the ring, where it's grabbed by the announcer who sets up the bout: Although this global cage match was originally billed as a one-sided mismatch between a bulked-up champ and scrawny, debt-driven challengers, it might be won by the speed of US technological innovation delivering the huge reserves beneath the Permian Basin in West Texas. (Read Sheffield's take on the oil business.)

After touching gloves, the ringside bell goes off: Sheffield, dancing like a butterfly and stinging like a bee, boasts, "We have the best rock," landing the first punch. Breaking up enough oil-rich rock to knock OPEC off its perch on top of the global oil market and creating what Goldman Sach's calls "The New Oil Order" builds self-confidence.

It leaves the Saudis reeling and former oil minister and cornerman Ali al-Naimi, the feared and respected architect of the 2014 switch in OPEC policy, out of a job.

Now OPEC allies are watching their economies implode as Saudi Arabia goes to outside investors to shore up its finances, which were recently down-graded by Moody's "to A1 from Aa3 on lower crude prices." According to Bloomberg, the country will probably post a budget deficit of 13.5 percent of economic output this year, forcing it to borrow about 120 billion riyals ($32 billion).

How quickly has fracking changed? A decade ago the typical well "decline rate" was 90 percent after the the first four months. By 2012, increased productivity pushed that down to 31 percent. Now it's 18 percent and still dropping like one of Sheffield's Permian Basin rocks.

Pioneer isn't an outlier in the Permian. The Baker Hughes North America oil rig count has risen for seven out of the last eight weeks to 374, but this undercounts the actual productivity. Multi-pad drilling means that three or more wells are drilled from the same rig — sometimes as many as twelve — which has pushed up Permian productivity fivefold in four years. 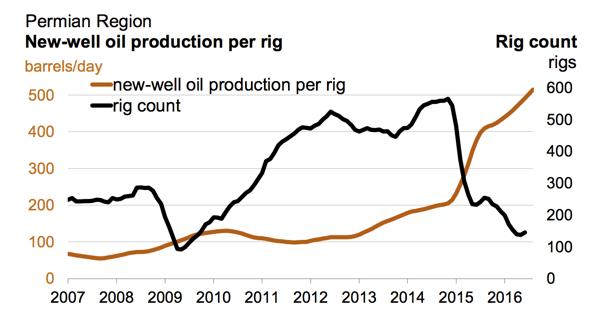 Sheffield lands another body-blow, saying that the Permian is as bountiful as Saudi Arabia's giant Ghawar reservoir, the Kingdom's aging crown jewel. While America’s other major tight oil fields have slumped during the downturn — the Bakken down 18% and Eagle Ford off by a third — the Permian has been steadily pumping 2 million barrels a day.

Propping up the battered former champ with one glove, Sheffield snaps that the Permian has a lot of upside, potentially surging from 2 million to 5 million barrels a day even if oil never rises above $55 — clearly a possible knockout punch.

Cue the ring card girl — Sheffield's Ali-victory-prancing around the the canvas — this fight's going the distance.

In an article for the Telegraph, Evans-Prichard laid out the numbers (in cold hard cash) that back up Sheffield's trash talk:

Wood Mackenzie estimated that full-cycle break-even costs have fallen to $37 at Wolfcamp and Bone Spring in the Permian, while the majority of US shale fields are now viable at $60.

The Permian is a prime location because it's uniquely loaded with overlapping hydrocarbon zones stacked on top of each other. Owning one acre in the Permian is like owning four acres anywhere else. With a future so promising, acreage has retained its value through the oil crash, and E&P companies have sucked up $10 billion in new investments.

Wood Mackenzie also found that if oil stayed around $60 for the next decade, the majority of new barrels would come from the US and the Permian rather than ravaged OPEC nations like Libya, Nigeria, Angola, or Venezuela.

Big oil jumps on board

Sheffield has told Forbes that he thinks the Permian could eventually supply 100 billion barrels, and higher prices would push Pioneer's production levels to 1.3 million bpd within a decade.

Now Big Oil has joined the independents in the Permian. Chevron, after exiling billions in investments like Australian LNG, is adding 4 Permian rigs, while reducing well costs 25% to $5.6 million. Credit Suisse pegs Chevron’s Permian development at $27.5 billion. Shell and Exxon Mobil are close behind, with 1.5 million acres and growing.

Finally, there's more bad news for OPEC. The next time the Saudis claim sole possession of the production heavyweight crown, 90 percent of the 3,900 drilled but uncompleted wells in the US are now profitable at $50 and just waiting for the right price before clobbering OPEC again.

When will the Saudis throw in the towel?