Two weeks ago reporters and fans joined Elon Musk and chief technical officer J.B. Straubel at the official opening of Tesla's Nevada Gigafactory, where, in addition to giving guests glimpses of the white-on-white cavernous space, the layout and the specialized robotic machines, they explained their plans to scale up battery production to meet increased demand.

Musk was following up on March's big Model 3 unveiling. After more than 370,000 buyers sent $1,000 deposits to reserve the mass market electric vehicle (EV), he decided to fast-track production by two years to 2018. 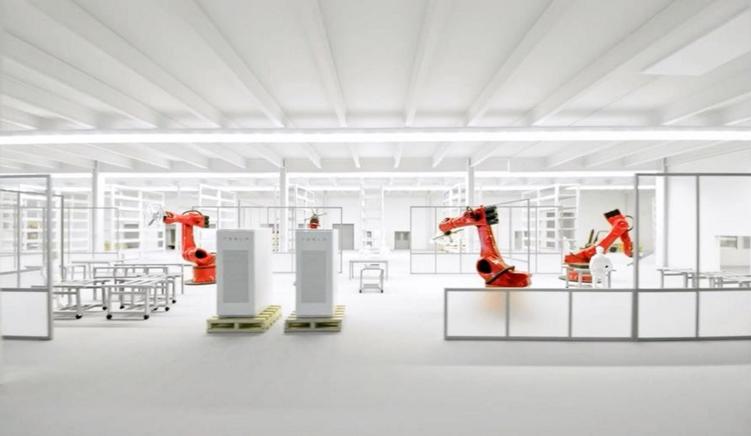 Moving production to the US

Many design decisions had been made long before the order surge thrust Tesla onto the fast track.

When the boutique company was still only delivering 50,000 high-end EVs a year, it could afford to import Panasonic batteries from Asia, but once Musk choose to ratchet up that number to 500,000, he knew that the batteries had to be made at the Nevada Gigafactory in the US, railroad-close to both lithium supplies and their final Bay Area factory destination, where the finished batteries would be loaded into new cars.

So even though Tesla and Panasonic had made enough productivity improvements since 2008 to cut costs in half and increase storage 60%, the Model 3 required even more radical changes to insure affordability.

In addition to moving the facility to the US, Musk decided during the factory's design phase to redesign the whole manufacturing process. He had his engineers draw a new factory from the ground up to maximize efficiency and lower battery costs. Within one giant facility, Musk could completely control all aspects of manufacturing: particularly variables like materials and labor.

“Over time, the majority of our engineering effort is going into engineering the factory as a product itself,” Musk had told reporters during a factory walk-through the week before.

“It’s the machine that builds the machine. If we take creative engineers and apply them to design the factory, they make five to ten times more headway than improving the product itself.”

Now finishing the factory is imperative.

Given that only 14% of the factory is done, to meet the looming, self-imposed deadline, 1,000 people are now working seven days a week in two shifts each day, and construction crews are building the huge factory as an series of smaller mini factories, where, ideally, manufacturing can start in each completed phase as crews move on to the next. At the same time, by building the same factory several times, each iteration improves on the last and squeezes out even more factory-floor productivity.

Today, occupying just 14% of the planned 6 million square feet, the Gigafactory's first phase is far from complete, but construction is already shaping the outer walls on the next phase. Nonetheless, this phase is already more than double the capacity of Panasonic's factory in Japan, Yoshihiko Yamada, EVP of Panasonic working with Tesla’s engineers, told Wired.

Musk has bet the ranch on vertical integration, reversing a half century of US manufacturing strategy, that, among other things, spent the last thirty years locating supply chains around the globe.

At the Gigafactory, rail lines will ferry ore from Nevada’s lithium mines to the factory; finished battery packs will ship to Tesla’s car facility in Fremont, California. Panasonic says it has never worked so closely with any supplier to rethink its manufacturing process. “The two teams came up with ideas together,” said Yamada. “This type of relationship is quite new in business. It’s not really a simple buyer and supplier relationship.” 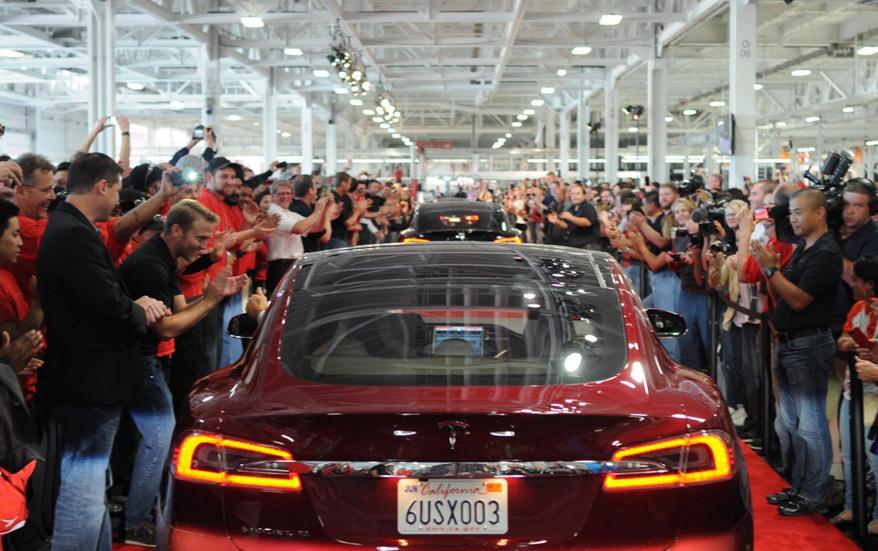 To contain labor costs, assembly lines will do everything from make the individual cells to assembling the packs that power a Model S or store energy in someone’s garage. Tesla says doing it all in-house will drive down the cost of a battery by 30%.

The Gigafactory also comes with big risks. Batteries are taking big steps forward after decades of incremental progress. Tesla risks getting stuck in the wrong technology, and owning a very expensive old technology.

But for Musk, there are few options. In terms of vehicles, within two years he needs to output 50 gigawatt hours a year — more than the total global output in 2014 of only 30 gigawatt hours.

A couple of years later, in 2020, when the factory's fully built, output should expand to 150 gigawatt hours and a million and a half cars.

Looking into the intermediate future, Musk will also fill out Tesla's vehicle lineup. It includes a crossover based on the Model 3 as well as a new kind of pickup truck. The crowd was taken by surprise when he also announced that the company is developing heavy-duty trucks and an electric bus, which could be unveiled as early as next year.

Looking farther into the future and leveraging Tesla's autonomous driving capability, Musk tossed out the possibility of a car-sharing and ride-hailing service, where owners could defray ownership costs by adding their Teslas to a fleet.

Has Musk bitten off more than he can chew?