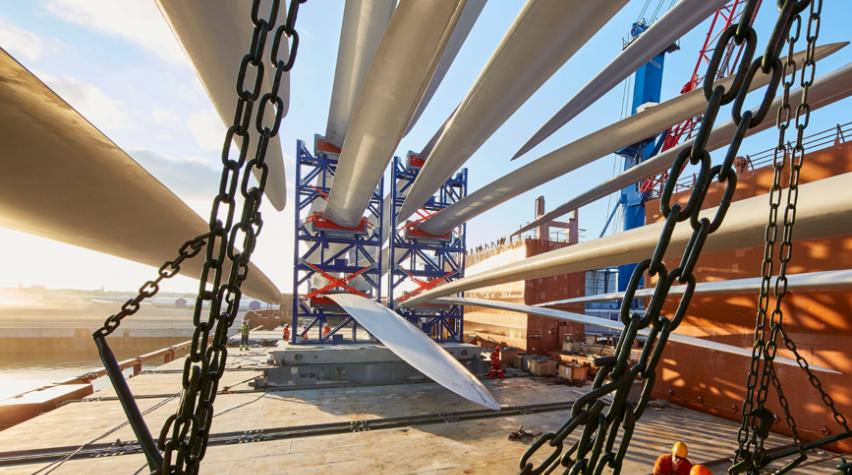 Developer Deepwater Wind is on the verge of launching the first offshore wind farm in the US. Later this fall, when its five turbines finally power up off the coast of Rhode Island, it will be a significant milestone for the nascent offshore wind industry.

Last week after a 3,000 mile voyage across the Atlantic Ocean, a ship carrying 15 Danish-made blades docked at the Port of Providence, where they were unloaded by crane onto the port’s quay. 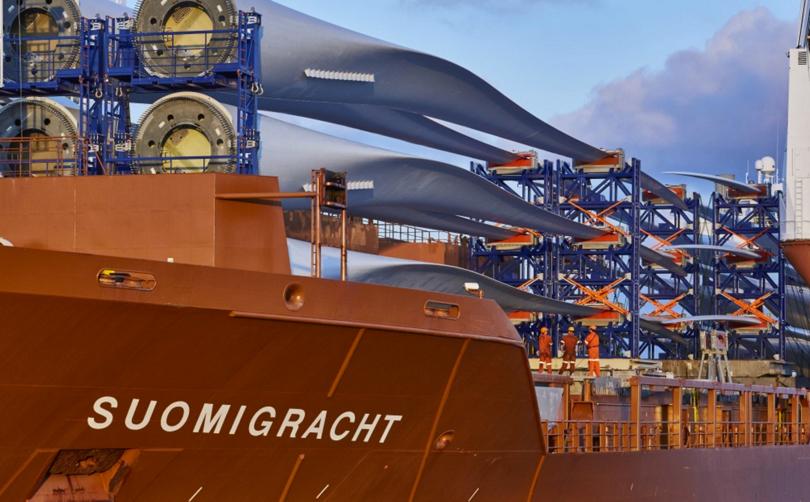 Joining the turbine towers, the blades will remain in the port until August when they’ll be loaded onto a special jack-up boat, make a short 6 mile trip out to the wind farm, and attached to bases that were anchored to the sea floor last fall.

Additional construction on the 6 mile cable connecting the wind farm to the Island has finished, and the 17-mile cable stretching from Rhode Island's mainland just landed on Block Island. 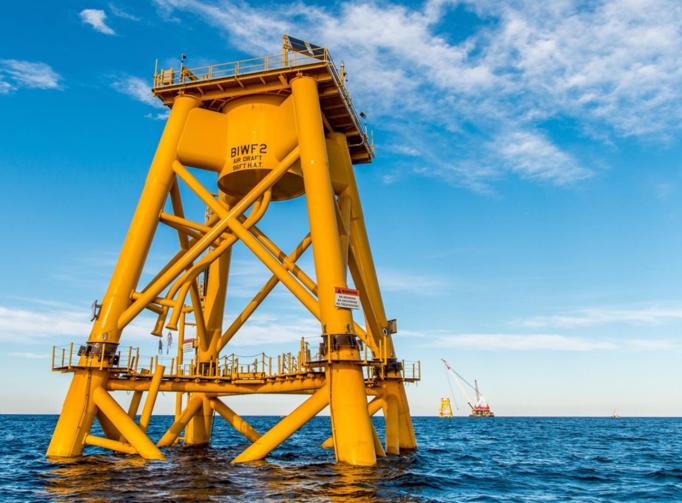 A new project in the wings

During a lull in construction, Deepwater's confident CEO Jeffrey Grybowski announced that the company's next offshore project will send 90 MWs of wind energy to Long Island, pending state approval.

Grybowski added, "Our project is not just the best site for offshore wind in the country, it’s also the right solution to meet energy demands in a cost effective way."

Once he's given the green light, the 15-turbine project will become the largest in the country. A project that large should begin to build a home-grown fleet of specialty vessels, instead of relying on ships leased from Europe that have been so instrumental for Block Island. On top of that, turbine manufacturing might be relocated.

In France, Eric Crucerey, who works for GE Renewable Energy and will supervise the Haliade's voyage to Rhode Island, says, “My job is to be ready for everything, understand any weaknesses in Plan A and always have a Plan B.”

That’s why he relied on specialists like Eskil Røset, a project manager with Fred. Olsen Windcarrier, the Norwegian offshore wind developer that has handled massive projects in the UK as well as the Irish Sea and Scandinavia. The firm will ship the nacelles 3,300 miles to the US, where Røset will also oversee the installation.

Crucerey is also working with logistics experts at Danish firm LM Wind Power, the world’s largest independent supplier of wind rotor blades. Together, they coordinated the transportation of the long blades from the Port of Esbjerg in Denmark to Providence. 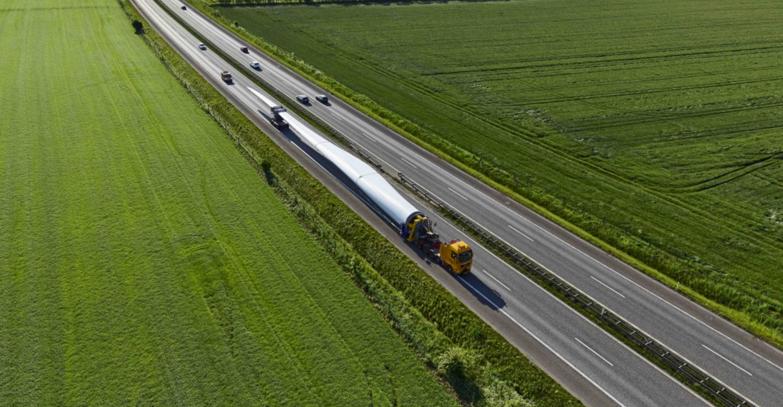 Once leaving France after mid-July on the Fred. Olsen Windcarrier Brave Tern installation vessel, the nacelles will ride on special platforms that allow huge waves to pass underneath rather than hitting the nacelles directly, lessening the chance for transit damage.

Fred. Olsen's project manager said the voyage will take between two and three weeks depending on the weather and any mid-course adjustments to avoid any adverse conditions. 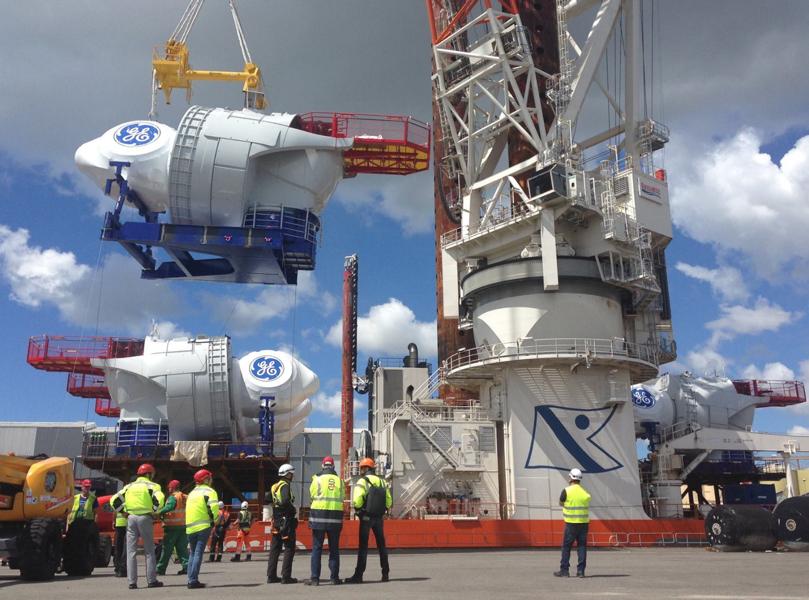 Arriving in the US, the Brave Tern will change from a 132-meter-long, 39-meter-wide transport freighter into an installation platform, its four legs dropping to the seabed and jacking the ship high up over the water. Then, an 800-ton crane will grab each nacelle and attach it to a tower. Later crews will fasten the blades.

Assuming the summer weather cooperates, the crew will assemble the five GE turbines during the late summer and fall, so that the project can be up and running by the end of the year. When complete, each 560 foot turbine will generate 125,000 megawatt-hours of electricity, enough to meet 90 percent of Block Island’s power and also supply electricity to the mainland by undersea cable. 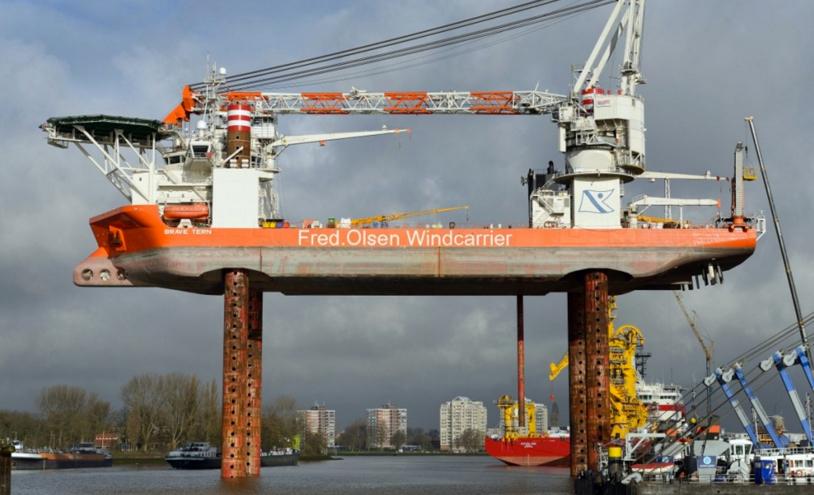 How quickly can the offshore industry get up to speed?