Just one week after Elon Musk unveiled Tesla's new Model 3, it's obvious the world liked what it saw. Once drivers were offered an EV with the right price and battery range, they reserved 325,000 of them — ka-ching — which adds up to $14 billion in sales, if the company can deliver. To put that astonishing seven-day total in perspective, it's already three times the total number of battery electric and plug-in hybrids sold last year.

Even though $325 million will drop right to Tesla's bottom line, which is a big boost for a company that's never made a profit, the huge demand will tax the limits of Tesla's manufacturing capability for years.

Nevertheless, with utter fearlessness, Musk says the company wants to build 500,000 Model 3's a year by 2020, at the same factory that already assembles the popular Model S, and now the new Model X.

Given those big numbers, it's impossible to overestimate how crucial the Gigafactory is to Musk's success. After all, Tesla is still a small, niche company that delivered 50,000 boutique autos in 2015. So in a very short time, Tesla must start acting like a much larger, in effect, more traditonal manufacturer to satisfy all of those new high-maintenace customers.

Musk has already tweeted that all of Tesla's efforts are "focused on accelerating the ramp" up in production.

To some degree the order surge was anticipated. By last November, Musk had already pushed construction ahead of schedule.

At the same time, normally very secretive Tesla surprised local reporters from the Reno Gazzette-Journal by inviting them inside for a work-in-progress tour (along with photos of the interior). Once there, a spokesman explained Tesla's rush, "There's not enough capacity in the world to produce what we want to produce."

Reporters immediately noticed that the Gigafactory was already in limited production. Even as construction crews worked, office staff were already crunching spreadsheets while giant robot arms assembled Powerwalls and Powerpacks.

No lithium-ion battery cells are manufactured at the site yet. Instead, they're shipped in from Tesla's Fremont, CA, plant. Cell production, as well as the battery packs for the cars, are expected to begin later this year.

Reporters also learned that Tesla had changed over to a modular construction method. "Originally, we were going to build the whole building all at once, but that didn't make a lot of sense," a spokesman explained. "We needed to begin producing faster."

Not only can Tesla use finished parts of the factory sooner, "We can learn from what we've built," he added.

Tesla's cell-making facility will open in 2017 and gradually reach full capacity by 2020, when it will insure that the company can produce 500,000 electric cars per year.

So far, the building's basic footprint is 800,000 square feet, with 1.9 million square feet of manufacturing space stacked in four stories.

When complete, the 5.5-million-square-foot Gigafactory will have the largest footprint of any building in the world, and in terms of volume it will be the world's second largest factory, behind only Boeing's Washington facility.

One aspect of construction that has gone under-reported is that Tesla has designed the factory to be powered completely by renewable energy. 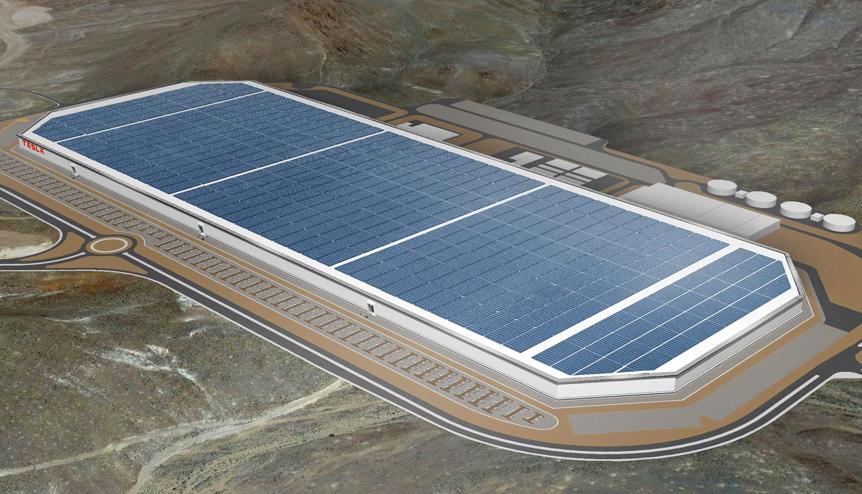 Just like the car, we're going to build a zero-emissions factory. We're not even going to have a natural gas pipeline coming to the factory.

So with no natural gas line running "anywhere near" the building, its vast rooftop will be covered in solar panels.

But even that’s not enough solar. So Tesla will add more solar panels to the surrounding hillsides.

In every step of the process, Tesla came up with zero-emissions solutions. They are even using a heat pump technology that ends up being much more efficient than just burning natural gas for steam. Finally, the only emissions are related to vehicles that might drive in and out of the property.

Will this factory change industrial design?