One dream has eluded pollution-conscious governments and price-conscious auto makers: the perfect mass market diesel car. Although diesel engines are very efficient and burn less fuel, which reduces greenhouse-gases compared to gas-powered cars, they also have a fatal flaw: burning dirty. Unfortunately, this usually happens in cities, where most people now live, due to low speeds and stop-and-start driving that causes incomplete combustion and spews toxic pollution that is devastating for human health.

Last December, just months after Finland's Neste started importing renewable diesel into California from its Singapore refinery, the state government in Sacramento laid down the law to its bulk fuel buyers, saying, “when making purchases of fuel for diesel powered vehicles,” they were advised to buy renewable diesel fuel — not biodiesel and certainly not regular diesel.  The agency defined "renewable diesel" very succinctly:

"...produced from nonpetroleum renewable resources but is not a mono-alkyl ester.” FAME biodiesel, the conventional fatty acid methyl ester,"  was not acceptable.

The agency gave renewable diesel the green light because it had "half of the carbon intensity of traditional diesel," which helped the state meet Governor Jerry Brown’s ambitious GHG reduction goals. Of course, one of the reasons it beat out biodiesel was that it had the advantage of being a true drop-in fuel that made the transition simple for customers with large fleets and their own storage tanks.

The impetus for the state-wide change began after California Air Resources Board (CARB) studies showed that Neste's renewable diesel reduced GHGs by up to 70%, compared to petroleum diesel; and it also offered a significant reduction in nitrogen oxide (NOx) and particulate matter that severely impact health in areas near freeways with high commercial truck traffic.

It's no coincidence that California's new directive came out the day after 196 nations ratified the Paris Climate Accord, which Brown and a large state delegation attended, touting California's success slashing carbon emissions. In meetings they'd argued that countries around the world should look to their state as a model.

Taking it to the public 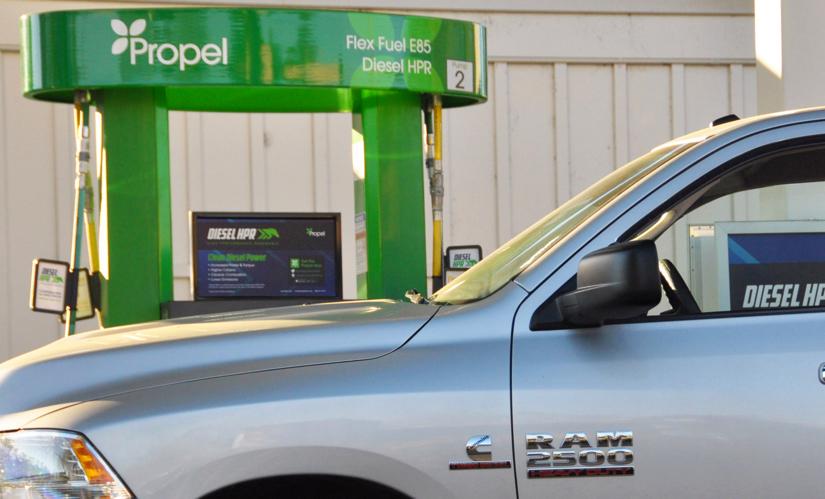 Neste’s and Propel's Diesel HPR, like biodiesel, is made from renewable oil like waste vegetable oil or animal fats. Unlike biodiesel, it meets or exceeds every federal quality requirement for diesel fuel without blending it with petroleum. The waste oils are processed by hydro-treating, exposing them to hydrogen at high temperature and in the presence of a catalyst, breaking the complex molecules into simple, straight-chain hydrocarbons, just like petroleum-based diesel.

All of that perfection still comes with a low price. At the March ribbon cutting, it stood at $2.89 per gallon, while just yards away conventional diesel sold for $3.09.

In the meantime, prices have only dropped. This January, during historic low prices at the pump, Propel's Diesel HPR was selling for $2.39 a gallon, while regular diesel sold for about the same price.

When VW's Diesel-Gate scandal erupted a few months before the Paris climate conference, it was all upside for Propel's new stations. After all, VW's promising Jetta TDI "clean" diesel had been touted as a major breakthrough, able to reduce soot and  NOx emissions without throttling back the car’s efficiency and performance. It had been a car that made everyone happy: regulators felt they'd encouraged the development of a new technology that cut emissions, manufacturers thought they'd hit the magic price point, and drivers, thinking they'd helped to clean up the air, drove guilt-free down the road.

But after the disturbing revelations emerged, duped owners of 500,000 VWs in the US — and 11 million worldwide — realized their "clean" cars had been spewing high levels of smog-causing emissions. The EPA revealed that VW had rigged engine software to produce deceptive results during government emissions tests, masking emissions 40 times the standard rates for nitrogen oxides.

VW’s "doping" software had been very clever. Engineers programmed the cars to detect when a regulator tested vehicles using stationary dynamometers, where the front wheels spin but the back don't. This allowed the engine to behave differently during stationary testing and switched over once back on the road. This dodge worked for years, until an independent study carried out by West Virginia University actually rigorously tested VW’s diesel emissions in the real world.

VW's CEO has apologized. But the damage — both to VW and diesel technology — was done.

Responding to the scandal, Propel CEO Rob Elam calmed customers, “We reminded them they can drive cleaner, with more efficiency and value, by fueling with our Diesel HPR at 32 locations across California.”

At its very root, VW was driven by the world's push for cleaner cars. They were under pressure from governments to make their cars emit fewer pollutants, but keep power acceleration high, deliver better fuel mileage, and keep costs low.

Most mass market diesel engines couldn't pull that off. In the past, when the engines were optimized to deliver peppy performance and fuel mileage, they emitted more poisonous NOx. To deal with that issue, high-end manufacturers like Mercedes-Benz and Toyota use an expensive additive based on urea as part of a selective catalytic reduction (SCR) system. VW’s cars were unique in passing tests without the expensive upgrade, making each vehicle accessible to a mass market.

Diesel vehicles, while popular in Europe, had been kept out of California's lucrative market because of its tough anti-smog laws. But once VW had the new "clean" diesel vehicles and flooded TV with green marketing campaigns, sales jumped from 79,000 vehicles in 2010 to nearly 140,000 in 2014.

While VW crashed and burned

The same week that California mandated the use of renewable diesel in its statewide fleet, Golden Gate Petroleum won the contact to supply state vehicles with Neste's renewable diesel, branded by the company as RD99.

Before San Francisco's switch to renewable diesel, most of the city's fleet was using B20, which was 20% FAME biodiesel. The City said that “1,966 vehicles that rely on diesel fuel will completely end the use of petroleum diesel at the 53 City-run fueling facilities immediately.”

Since bringing the Neste's fuel to market, Golden Gate has converted many other public and private fleets. Oakland flipped in October and Walnut Creek in September.

Golden Gate later said it had seen a dramatic increase in demand. “To date,” the firm said, “Golden Gate has sold over 60 million gallons of this low-carbon alternative fuel making a tremendous impact on air quality throughout California.”

Renewable diesel easily replaces petroleum diesel with no equipment modifications and no expensive infrastructure changes. It can be used in existing storage tanks without a special permit unlike most biodiesel. It can also be used in off-road vehicles, construction equipment, auxiliary engines, generators. To summarize, it can convert the entire diesel fleet to alternative fuel overnight. I know, it sounds too good to be true…but it is!  (See video).

When will Neste build a refinery in the United States?