With over half of the Earth's population living in cities, the vast tracts of the world's commercial real estate have become laboratories where companies experiment as they integrate renewable energy with energy-efficient building technologies.

One of the pioneers has been California-based Prologis, the largest global owner and operator of what it calls "logistics real estate," basically every permutation of warehouse/distribution center known to man, and it's become one of the most innovative new-energy companies of the 21st century.

Since 2007, Prologis has installed 140 MW of solar panels on more than 35 million square feet of roof-space in six different countries.

In the United States, Prologis certainly wasn't the only business to put solar on its rooftop. As the price of solar modules dropped during the last ten years, big boxes like IKEA and Costco took advantage of the trend; FedEx distribution centers also loaded up; so did Apple and Verizon, topping off their far-flung data centers.

Last year, according to the Solar Industries Association, Walmart, the leading rooftop solar installer in the US, owned a cumulative 142 megawatts (MW) from 348 installations. Prologis was second, trailing Walmart with a respectable 97.54 megawatts. 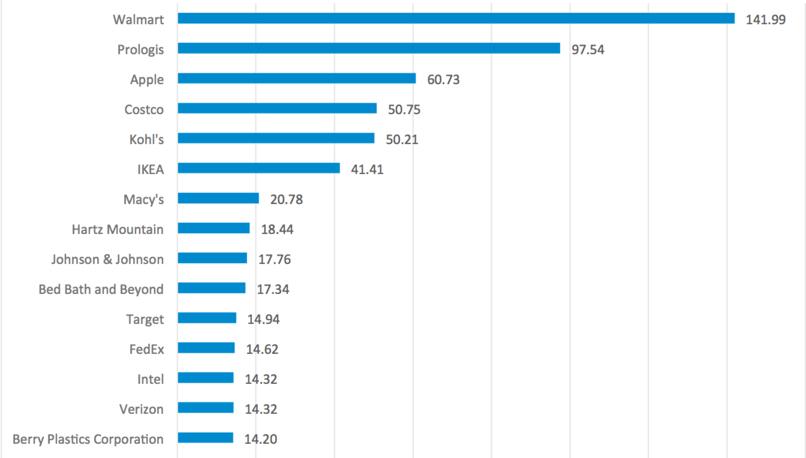 But Prologis is the only company on the list that didn't invest in rooftop solar to reduce high electricity bills.

It has a completely different game plan. (See the Prologis corporate responsibility report.)

When Prologis leases the floor space inside a building to a client, it maintains control of the roof space, and then leases it to an outside investor or utility, which pays for the installation of solar equipment.

Afterwards owners of the roof's solar system pay Prologis a long-term monthly fee, and the renewable energy is off-loaded to the grid.

“Traditionally the only purpose of the roof was to keep the building dry and secure,” Matt Singleton, vice president for global energy and development at Prologis, told Salon. "The company plans to own its buildings for decades. And when your capital is tied up for long periods of time, you want to make the best use of it. “We're motivated to generate clean power, but also to leverage an underutilized asset."

After completing its first solar installation in France in 2005, where electricity was expensive and there were juicy incentives to build solar, Prologis quickly set up solar rooftops across the globe in Spain, Germany, North America, and Japan.

By 2009 the company's rooftop solar business was growing so fast that it formed the Renewable Energy Group to focus solely on developing and managing solar installations around the world.

In the past several years, Prologis shifted its focus back to the US because the market improved. Costs declined sharply, and key tax credits were renewed. Also, many states have net metering policies that allow customers to sell excess power into the grid. 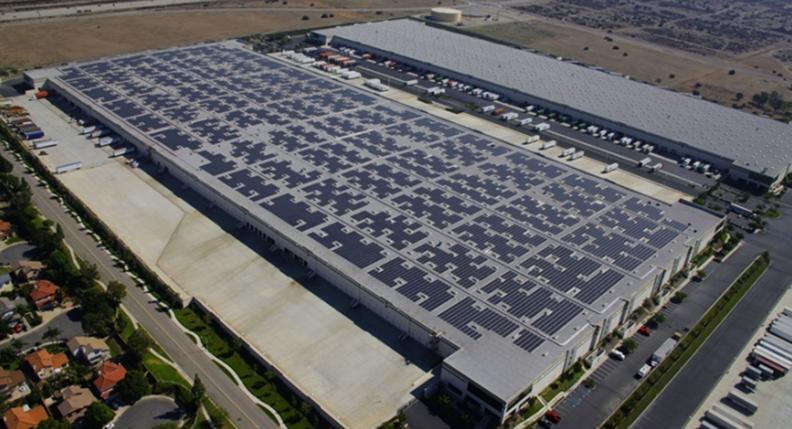 This culminated when Prologis completed one of its largest solar rooftops in Los Angeles just last year.

One million square feet of rooftop solar feed 4.2 megawatts of power directly into the Los Angeles grid as part of feed-in tariff program.

And the leasing business itself has been very good. With 96 percent occupancy, Prologis' 4,700 global customers are weighted heavily in logistics and ecommerce.

Active in 20 markets, Prologis has been riding the global ecommerce trend, often in developing countries, becoming a real estate company with the longest global reach in the world. 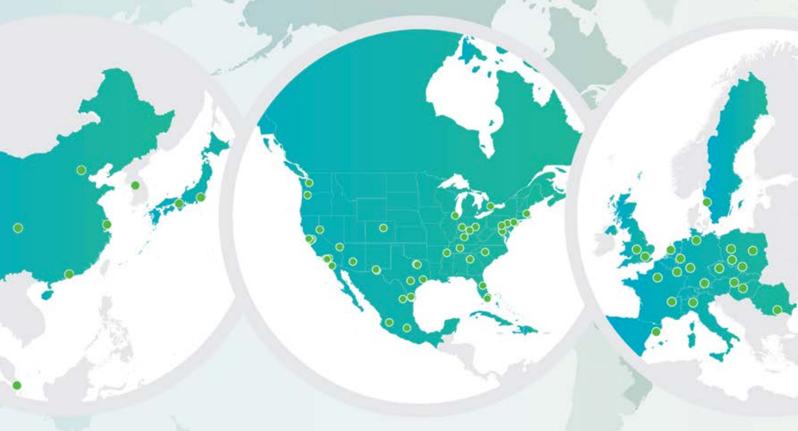 ...the cell phone skipping over the landline business. A lot of these markets never experienced the big box retail phenomenon, and they’re going straight to ecommerce ahead of developed countries.

For example, ecommerce shopping is growing rapidly in China. The same with Japan, where speed of delivery, particularly same‑day delivery, is becoming very important.

With a total of 18.8 megawatts installed, Prologis Nippon sent 11 million kilowatt-hours over the grid last year, powering more than 2,000 homes.

Globally, the company plans to add about 15 megawatts a year through 2020, which means growing about 10 percent annually. Also, as it expands its solar footprint, look for Prologis to add energy storage to the mix, which will allow it to profit more from the electricity it generates. As Singleton told Salon: “We'll see a convergence of real estate and energy."

Prologis has always taken a holistic approach to reducing the carbon footprint of each property. Beginning with a new building's design, the company uses software called Dynamic Energy Simulation.

Next, since lighting and water-use consume most of the energy in these huge minimal buildings — often as much as two-thirds — Prologis integrates environmental features into new and existing buildings.

After the natural lighting retrofits, high-efficiency LED lighting is added, usually coupled with photocell controls and motion sensors directly linking use to demand. Prologis has increased the number of buildings using energy-efficient lighting to 68 percent, up from 64 percent 2013.

At its innovative Vémars facility in France, after incorporating features like high-efficiency LED lighting and software to optimize energy and water consumption, Prologis created an Internet-based car-sharing program for the L’Oréal employees who work there. It will be extended to other properties throughout France.

With respect to sustainability, we’re a leader in the industry.  We’ve been the winner of many awards, including the World Economic Forum. That is increasingly one of the most important aspects of competing for customers’ mindshare.