Technology trends are easy to spot as soon as the big money starts flooding the zone, and a major investor just opened the spigot for solar-powered, sustainable agriculture with $100 million.

This trend — Agribusiness 2.0 — started five years ago in a tiny 0.2 hectare solar-powered greenhouse in Port Augusta, Australia, when Sundrop Farms started successfully growing 150 tons of tomatoes a year. These 21st century farmers were able to ignore (from the protection of a climate-controlled greenhouse) daily evidence (sunburned locals) that the surrounding scrub-scape was too hot and arid to farm. This concept is so new — primarily because economical solar is so new — that Sundrop is one of only two small companies to develop this radical new farming technique. (See a pilot greenhouse video.)

Now, the company wants to bring these solar-suffused greenhouses to near and distant regions of the world where rain water is nonexistent, groundwater levels are sinking, and communities are dogged by the threat of food insecurity. Those dire circumstances describe the future of 21 of the world’s 37 biggest aquifers, which have passed sustainability tipping points, according to NASA. Over a third are so bad that they're experiencing high levels of "stress." 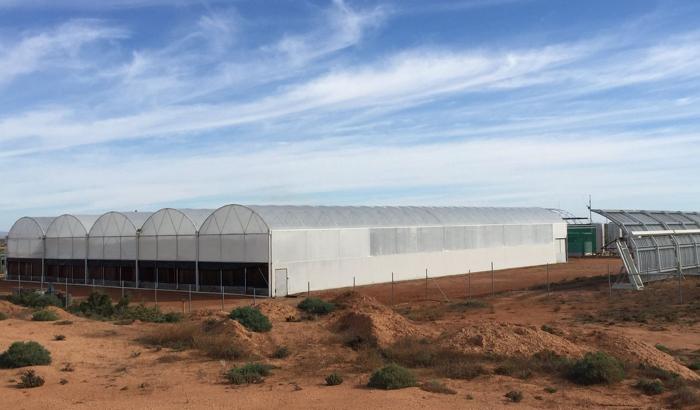 CEO Phillip Saumweber barely exaggerates as he hogs the limelight, saying, "Sundrop is the world’s first commercially and environmentally sustainable arid-climate agriculture business, and this significant investment is at the heart of our growth strategy."

Saumweber is a Harvard MBA and former Goldman Sachs banker who decided the food supply needs to be produced very differently and wanted to make a handsome profit doing it. He saw that as the world’s population grows and middle class lifestyles globally explode, farming, particularly agribusiness, puts increasing pressure on resources like water and oil. He says that Sundrop's process decouples food production from those finite resources by relying on the synergies of sunlight and saltwater to profitably and sustainably grow food.

This is done by using concentrated solar power (CSP) to heat, power, and desalinate salt water from the ocean, so Sundrop can feed and pamper its air-conditioned tomatoes, insuring a bumper crop 365.242 days a year.

Going to the Middle East

Until now, Sundrop and Saumweber had subsisted on a government grant from Australia. But the $100 million from New York-based private equity firm KKR has changed everything. Sundrop has accelerated its plans to expand its Port Augusta pilot into a 20-hectare facility that will produce over 15,000 tons of pesticide-free tomatoes every year.

Saumweber, told the Port Augusta Transcontinental that construction started in May, and that the greenhouses will "be up and running by the middle of 2016." 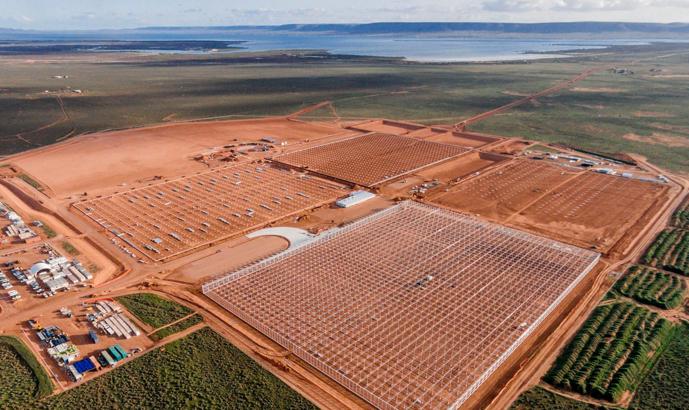 By early next year, this former ward of the state will have 200 employees manning its new computer-controlled, convention arena-sized greenhouses. To get all of those newbies up to speed, the company has turned its starter site into a training center. They will be schooled in Sundrop's high-tech, Appleish-Store revamp of 19th and 20th century farming, now technologically tweaked out with head-mic'd, ipad-toting farm techs who can remote-view the tomato crop, while humming along as "Oklahoma" plays on their earbuds.

As an important and profitable part of Sundrop's expansion, Saumweber also signed a 10-year contract with one of the largest supermarket chains in Australia to buy its tomatoes.

KKR's man in Australia, Justin Reizes, who felt that Saumweber had the right vision for a changing world, wants to help the company go global and looks directly to the future, not stopping at local success, “We are delighted to work with this team to pursue new growth opportunities in Australia and internationally.” (See his short video.)

Sundrop and KKR intend to develop a center for arid-culture innovation in Port Augusta to cultivate relationships with countries suffering from similar enviromental problems. This should lead to a planned expansion into the Middle East, North America, and Africa.

As Sundrop scales up, the technology has been improved to support the size and complexity of the new project. The old 75-meter-long parabolic mirror supplying heat to the pilot project will be replaced by 24,000 computer-controlled heliostats that will direct sunlight to a 327-foot-tall tower, which will then create steam to power turbines that provide energy for the zepplin-sized greenhouses. Harvested energy (another upgrade that completely frees the greenhouses from hydrocarbons or the grid) will be stored and then used around the clock to power the operation, control greenhouse temperatures, and drive a thermal desalination process.

Will Sundrop show up on the coast of Texas? 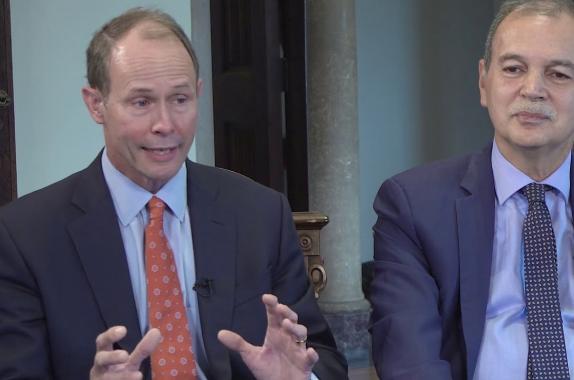 Watch a discussion on the future of energy.