First the good news. Last April, after a ceremonial whack on the ship's bow sent champagne spraying into the air, a new transportation era finally began to take shape. Caught up in the festive spirit of bands, balloons and fat pay checks, the large crowd cheered as the world’s first liquefied natural gas (LNG) powered containership, christened the Isla Bella, slowly slipped out of its dry dock and into the waters surrounding San Diego. TOTE, the ship's owner and General Dynamics, the builder, air-kissed over the completion of the first of two Marlin Class containerships, which will travel between the US mainland and Puerto Rico later this year.

This will be one of the first ships to use the special 8L70ME-GI gas-injected engine from Doosan in South Korea, under license from MAN Diesel and Turbo. It's a dual-fuel engine capable of running on either conventional fuel oil or LNG. (Revolutions don't happen over night.) However, TOTE does expect that LNG will increase fuel efficiency. 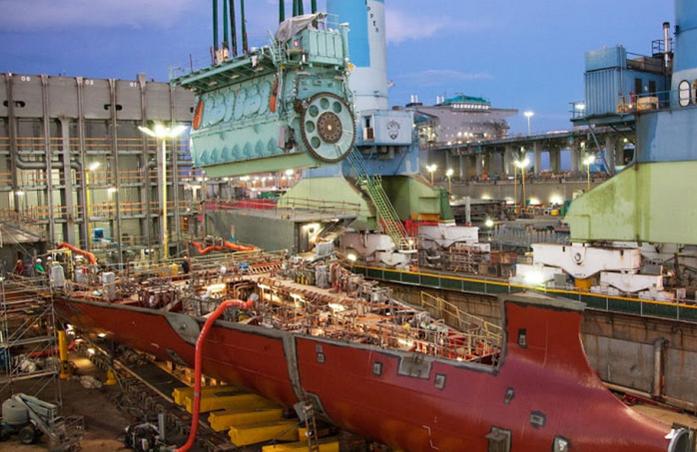 By switching to LNG, according to TOTE, the Isla Bella will reduce its NOx emissions by 98 percent, SOx by 97 percent, carbon dioxide by 72 and particulate matter (normally linked to coal) by 60 percent. Which is a very big deal.

TOTE's ship joins a small group of about 50 LNG-fueled ships (excluding LNG carriers) worldwide — 44 in Norway, three in Asia & Pacific, two in Europe and one in America. But that's an inner tube-sized statistical blip bobbing in the wake of 100,000 ships already plying global trade routes, all powered by bunker oil, one of the dirtiest fuels on the planet.

In the 1950s, the shipping industry adopted bunker fuel after it rode the rise and expansion of petroleum refining all around the world. For shippers, there was gunk in every port. At the time that was a seen as a win-win: refiners could profitably offload their heavy sludge to shipping companies desperately trying to keep their costs low. It was a perfect symbiosis that  supercharged global commerce once China became the go-to tchotchke maker, when finally all maritime roads bypassed Rome (and the rest of Europe) and headed straight to Shanghai.

On the lose-lose backend, a lack of international regulations has meant that bunker fuel remains the industry standard even as studies demonstrate — over and over — its serious health and environmental problems.

As the global fleet of container ships grows — along with ship size — air pollution continues to get worse. The fact that just 16 of the world’s largest ships can produce as much sulfur pollution as all the world’s cars should alert everyone to the problem of bunker fuel. And like the airlines, most fuel efficiency gains are pumped into more tonnage per ship in one of the world's most cut-throat businesses.

So, for now, bunker fuel is here to stay because it's literally the bottom of the barrel, and oh so cheap. After a typical refinery fractionalization, the only thing more dense than bunker fuel is the residue which is mixed with tar for paving roads and sealing roofs.

Now everyone has to live with knock-on effects of the Davos paradigm, a shipping-based supply chain that circles the globe, offering the sequential assembly of goods from the cheapest sources. All fueled by every ship owner's favorite on-the-down-low commodity energy: bunker oil. And there are more trade-offs than just blue collar job losses. Bunker fuel degrades even less rapidly in the environment than standard fuel oil. When burned, it produces a mixture of sulfur dioxide, carbon dioxide, nitrogen oxides, and other pollutants that have been linked to acid rain, increased asthma, lung infections, and tens of thousands of premature deaths every year in port communities around the world.

Whenever the 1,300 foot Emma Mærsk, one of the world's largest merchant ships, moves its cargo between China and the the rest of the world, it burns nearly 350 tons of bunker fuel a day. The giant diesel engine emits more than 300,000 tons of CO2 a year, making it the ocean-going equivalent of a medium-sized coal power plant.

The chicken and egg problem comes home to roost

LNG, along with biofuels, should be a no-brainer if the world wants to stay below the crucial two-degree climate warming threshold. But shipping's LNG revolution is still at the very beginning. The Isla Bell is containership-zero because until now reducing CO2 emissions from the world's fleet of ships has not been a priority for governments or ship owners.

It also requires a concerted effort, with governments capping sea-borne emissions, while corporations build new engine technology and enough fueling infrastructure to make LNG as easy to procure and use as bunker fuel. But like the transition slowly oozing through the power sector (at least a decade or two ahead of shipping), several generations of sea captains will retire and spend their golden years cruise-ship shuffle boarding before bunker fuel is given its gold watch and retired.

Nevertheless, every revolution has to start somewhere, and the Isla Bella would be burning traditional bunker fuel if the EPA hadn't issued a set of landmark regulations in 2012. They created the North American Emission Control Area, or ECA, which requires that ships traveling within 200 nautical miles of the non-Arctic U.S. and Canadian coasts use fuels with a sulfur content 1,000 ppm sulfur limit by 2015. The rule will also achieve an 80 percent reduction in smog-forming oxides of nitrogen by 2016. As world opinion concerning bunker fuel has gelled, Europe created the same type of bunker-fuel-no-go zone.

Fortunately, another 69 new vessels are confirmed LNG future builds (as of September 2014), with 26 in Europe, 20 in America, 19 in Norway and four in Asia & Pacific, according to DNV GL.

Rising duel-use engine orders look promising too. In addition to the engines delivered to the Isla Bella and its sister ship, which will be launched later this summer, MAN Diesel & Turbo reports they're received more than 100 orders for the new engine.

It's no coincidence that the port of Jacksonville, Florida, began planning a liquefaction facility to service the islands of the Caribbean as soon as the EPA regulations went down.

Shipping out without a paddle

But, ironically, the Isla Bella is still in San Diego, which hasn't built an LNG facility (and doesn't have a reason to yet). Look for those to quickly pop up in Los Angeles and San Francisco first. So before this LNG flagship can weigh anchor and make its way to Jacksonville, Florida, 20 truckloads of Clean Energy's LNG will be delivered to top off the vessel’s twin cryogenic fuel tanks.

Once in Florida, initial bunkering will be fed by trucks using a fleet of ISO containers from Applied Cryo Technologies until a JaxPort liquefaction facility is built. To accomplish this, Pivotal and WesPac are building a facility close to the Sea Star Terminal from where the vessels will operate and then flameout across the Caribbean. 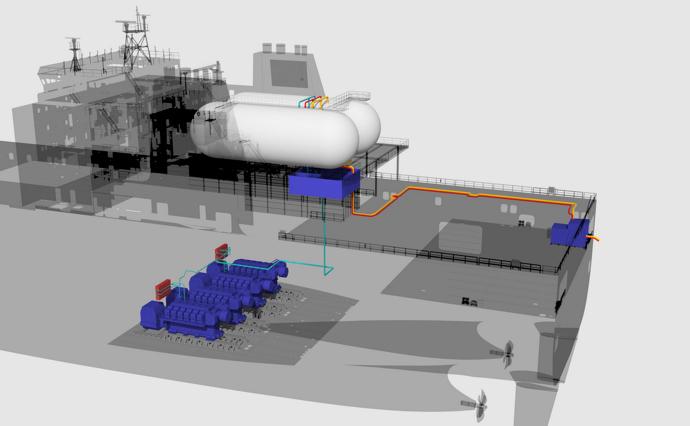 Liquefied natural gas (LNG) has the potential to help replace diesel fuel for long-distance road and marine vessels. Already, almost all major oil & gas companies (Exxon Mobil, Shell, Total, BP, Gazprom, GDF Suez, Statoil and others) have their own LNG projects. Only recently have some companies, including Shell, started to promote LNG as an alternative to oil in transport sector.

Since Anthony Chiarello, TOTE’s president and chief executive officer, is all-in, he's a complete LNG booster, “Within the next five to 10 years, LNG will become the main fuel source for all marine transportation,” and he enjoys adding that he gets at least half a dozen calls a week from other owners asking about the fuel. “It’s going to catch on. When those ships are actually plying the seas and people are then able to calculate the emissions impact and the possible cost savings, they can do all that math and say, ‘This is really a good decision.’” Times change, revolutions finally happen, and if he'd said that ten years ago, he'd have been laughed out of the business.

How long will the LNG and biofuel transition take?