GE has been intensely innovating every part of its wind turbine ecosystem - both hardware and software - since it won this prize asset in a bankruptcy auction from Enron in 2002, with a tag-sale bid (economists would call it "opportunistic," but the successful GE execs might prefer "pragmatically predatory") of $358 million.

Since then, GE's wind turbines have spread out across the country as their improving technology has made more land and more utilities turbine-friendly."If you go back 10 years and look at wind power and then look at where is today, it's dramatically different," Keith Longtin, GE's wind products general manager, told Renewable Energy World.

To show that the pace of innovation is faster than ever, GE just unveiled two new products surging through its packed pipeline. The first is called the “Digital Wind Farm”, and it's built on Predix, a software platform that GE developed specifically for the Industrial Internet. 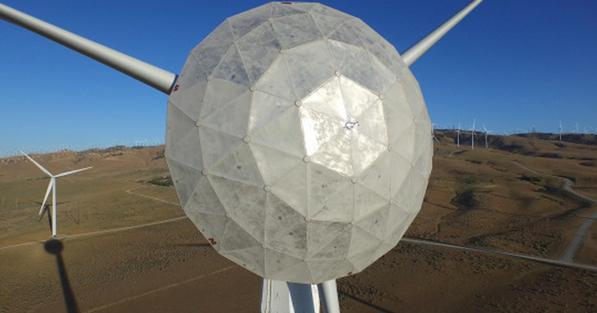 The second, so new it's still undergoing testing, is a large dome bolted in front of a wind turbine rotor to enhance the wind flowing over and torquing its blades. This design is called the ecoROTR and the company is testing it on top of its newest and tallest turbine tower, a Space Frame prototype, which was unveiled just a year ago.

Cheaper than coal or natural gas

As GE's wind turbine innovation accelerated, the cost of selling its power to the grid also dropped. As of 2014, in markets with wind speed sweet-spots, it's become cheaper than coal or natural gas. New power purchase agreements have been coming in below natural gas, especially on the Great Plains. Last year in Oklahoma, American Electric Power tripled the amount of wind power it originally wanted after seeing how low the bids were from developers.

“Wind was on sale,” Jay Godfrey, director of renewable energy for the company, told the New York Times. He added that although Oklahoma, unlike many states, did not require utilities to buy power from renewable sources, we're doing it because it made sense for our ratepayers."

Other than location, location, location, the trend in the wind industry has been ever higher hub heights, but traditional tube towers have finally topped out and scale poorly beyond this point. That's because increasing the cumbersome supporting materials doesn't pay off with enough increased capacity.

So in the hillsides around Tehachapi, a windy town becoming one of California’s 21st century "oil fields," wind turbines clot the hills. The tallest - far larger than any of the others - rises 450 feet from base to blade tips, also sports a one-of-a-kind spinning dome in front of its rotor, which is large enough to be easily spotted from a distance. 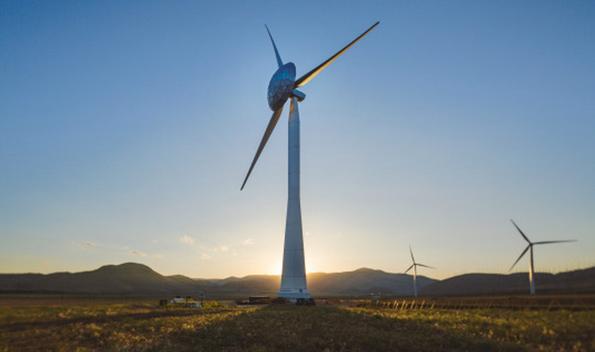 The spinning aluminum dome attacks two problems: first, wind turbines “waste” too much wind. Second, the blades and towers are now so big and heavy, they’ve become hard to transport - particularly to the remote places where the wind is strongest.

If this real-time experiment confirms earlier wind tunnel data, the 20,000-pound dome could soon go into production, leading to more efficient turbines. “As far as I know, there’s nothing like this in the world,” Mark Bowman, the leader of sustainable energy projects at GE Global Research, said. “This could be a game changer.”

Cutting a small Styrofoam ball in half

Although GE is known for its reliance on simulation software, the dome project started with a small Styrofoam ball and a toothpick two years ago, when Mark Little, who runs GE Global Research, challenged his scientists to build a rotor that could harvest more wind. “He told the team to look for unexpected answers,” Bowman said. “You can’t just stretch out the blades. They are already too long and too difficult to ship.”

After going back to basics and rethinking long over-looked problem areas, the team proposed to give the turbine a big, rounded shield. “The design looked really strange," Bowman said, but then he had an aha moment and realized that the solution had been laying in plain sight for decades. “When wind hits the center of the wind turbine where the blades are attached, it’s wasted. That’s because the blades are basically levers and the same wind generates more force further from the hub.”

The nose could also allow engineers to build bigger rotors without lengthening the blades, since they could start them at its perimeter.

The group tested the idea in a wind tunnel at GE’s lab in upstate New York, where they sliced a small Styrofoam ball in half and attached it to the front of a small model with a toothpick and glue. The team then ran multiple simulations.

After they crunched the numbers, the team saw up to a 3 percent increase in performance. Bowman said, "It doesn’t seem like much, but it’s a lot when you apply the savings across an entire wind farm.”

In Tehachapi the team finally attached a production-sized 60 foot wide dome to a turbine sitting on top of a 300-foot tower. Like the dome, the tower is also a prototype. Instead of traditional steel tubes, it employes a “Space-Frame” design that uses metal latticework wrapped in a polyester weave coat. (watch the Space Frame installation) 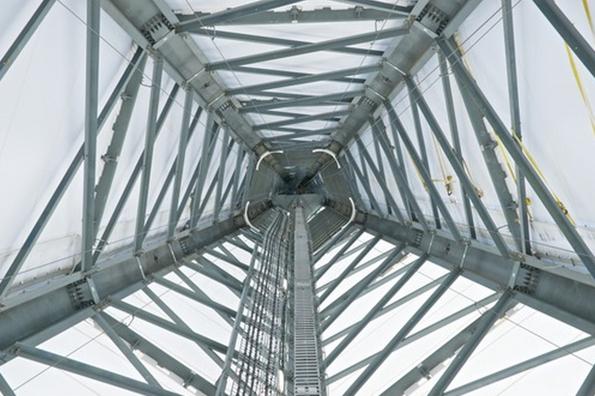 GE successfully scaled up the Space Frame's tower and kept costs down. Its 10-meter-diameter base allows a 120-meter-tall tower to use 20 percent to 30 percent less steel than a traditional 100-meter-tall tube tower, because the broader base means less support is needed from the tower walls. It stands on five legs that provide wider support and more balance than the traditional tubular tower, and the weather resistant cover is strong enough to last for the lifetime of the structure. Since the frame comes in parts, its girders can be easily loaded inside normal shipping containers and transported by truck, so they can be put together in places that were previously hard to reach.

Even though the current Space Frame took 30 days to assemble, GE believes that once it's in full production the average assembly time will be four days.

To track the performance of the space frame and the dome attached to the top, sensors have been placed throughout the structure, starting on the tower legs at ground level, up to the turbine’s spinning shaft and the dome itself. Daily, the team pores over the data to see if any changes need to be made.

“This is the pinnacle of wind power,” Bowman said.” I get the feeling ecoROTR and the space-frame tower could be the perfect couple.”

Since embedded sensors are GE's default remote monitoring device for its wind turbines, this has provided an opportunity for another new product: its Digital Wind Farm built on the Predix software platform. Developed specifically for communicating over the Industrial Internet, Predix accommodates apps designed for specific wind farm tasks – from responding to grid demand to maximizing and predicting power output.

The Digital Wind Farm ecosystem begins with the production of the turbines themselves. It utilizes a digital twin modeling system to build up to 20 different turbine configurations at every turbine location across a wind farm in order to generate power at peak efficiency based on the surrounding environment. Additionally, each turbine will be connected to advanced networks that can analyze turbine operations in real time and make adjustments to boost operating efficiencies. 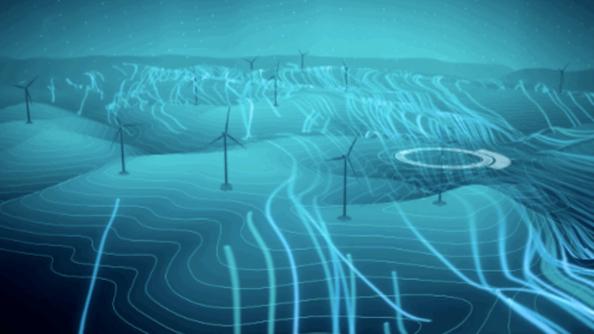 “Every wind farm has a unique profile, like DNA or a fingerprint,” says Keith Longtin, the general manager for wind products at GE Renewable Energy. “We thought if we could capture data from the machines about how they interact with the landscape and the wind, we could build a digital twin for each wind farm inside a computer, use it to design the most efficient turbine for each pad on the farm, and then keep optimizing the whole thing.”

Once the turbines are built, their embedded sensors are connected and the data gathered from them is analyzed in real time with GE’s Predix software, which allows operators to monitor performance from data across turbines, farms or even entire industry fleets. The data provides information on temperature, turbine misalignments or vibrations that can affect performance.

As more data is collected, the system actually learns over time, becoming more predictive and “future-proofing” wind farms by maintaining top performance and avoiding the maintenance issues that typically occur as turbines age. It also reduces costs by customizing maintenance schedules to ensure preventive maintenance is done only when needed. 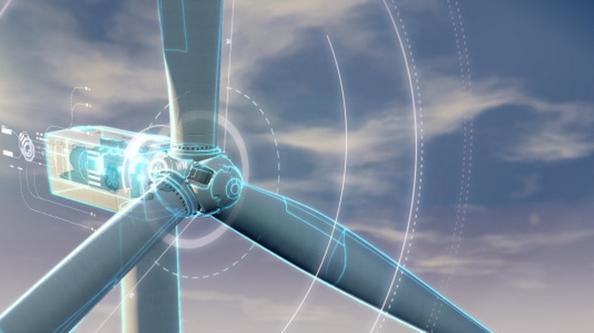 The data comes from dozens of sensors inside each turbine monitoring everything from the yaw of the nacelle, to the torque of the generator and the speed of the blade tips. The digital twin, which can optimize wind equipment of any make, not just GE’s, gobbles it up and sends back tips for improving performance. “This is a real-time analytical engine using deep data science and machine learning,” a GE exec said.

GE says that the technology could boost a wind farm’s energy production by as much as 20 percent and create $100 million in extra value over the lifetime of a 100 megawatt farm. That value will come from building the right farm at the right place and then using data to produce predictable and power and further optimize the farm’s performance.

"That is really the direction we're going," Keith Longtin said. "If you go back 10 years ago, the turbine was at about 25 percent capacity factor. Today, it's over 50 percent. As we've improved the capacity factors and improved the cost of energy, that enables us to go into more and more locations where the wind is lower."

When will wind turbines actually become a mature technology?