When Elon Musk ignited a fierce bidding war to host Tesla's new gigafactory, Nevada's governor, the eventual winner, knew that his state would be building an essential part of the global manufacturing and energy infrastructure for the 21st century. Assuming Tesla doesn't implode for unforeseen reasons, the state's workers and businesses are confident that a large industrial ecosystem will grow up around the factory, guaranteeing innovation and new jobs for decades. As a matter of fact, across the country businesses are already making plans to uproot and move to Reno, hoping to supply Tesla's growing roster of electric vehicles with future components that haven't been imagined or invented yet.

This scenario is spreading all over the world at warp-drive speed. US-based SunEdison just announced plans to build a massive, $4 billion solar module factory in India with a large, regional energy conglomerate. Now India won't have to rely on China — frenemy and rival — for solar panels to supply its huge solar buildout, and it will also ride the energy revolution into the next century. 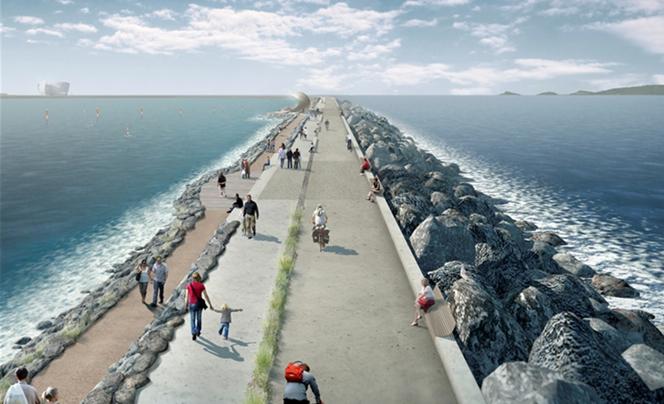 This burgeoning trend brings us to Swansea, a dingy, depressed South Wales city of 240,000 people, once famous for shipbuilding and metalworking, that fell on hard times after high-wage shipbuilding moved to low-wage Asia. Now down-at-the-heels, the city sees a chance to become part of the growing alternative energy economy.

Combining the best tidal resource in Europe — about 6 meters from peak to trough — with a desperate need to rebuild, Swansea is the potential site of a new project that could power nearly every house with electricity generated by the ocean’s natural rhythms.

The £1bn Swansea plan is to construct the first power station in the world based on a man-made tidal lagoon, where a seawall made of dredged sand, sheathed with heavy rock, would enclose 11.5 square kilometers of ocean off the coast. A short stretch of wall will contain 16 turbines, and closed gates will open to allow water to flow once the tide reaches a peak between the water inside the lagoon and outside. This happens four times a day, once in each direction for high and low tide. 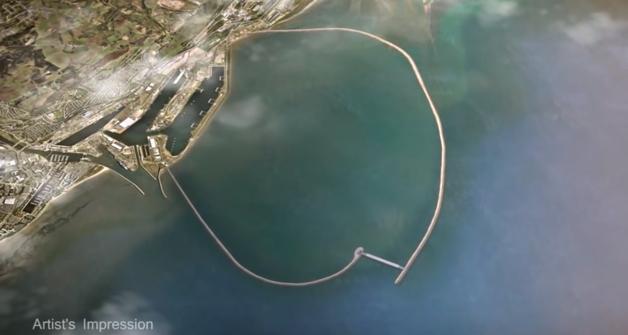 This single tidal lagoon could generate electricity for 155,000 households, or 90% of the city, according to Tidal Lagoon Power, the company formed with the aim of bringing this project, and others like it, to fruition.

Power firms like lagoon energy because, unlike power from the sun and wind, it's predictable and produces energy 14 hours a day. Mark Shorrock, CEO of Tidal Lagoon Power, told BBC News, "We have an opportunity to create energy from the dance between the moon and the earth. Although it's rather expensive at the beginning, as time goes on and the capital costs are paid off, it becomes incredibly cheap."

Since the UK is beginning to replace its aging power stations, its now looking to renewable energy, like tidal power, to play a role and is in discussions with Tidal Lagoon Power Ltd to see if the potential project in Swansea Bay is affordable and a good value for consumers.

A big hurdle is that the initial cost of power is higher than any other form of generation, at £168 ($251) per megawatt hour - when energy from fossil fuels typically costs under £100 ($149) and even new offshore wind, the next most expensive form of generation, costs around £140 ($209).

The developers want to build five more tidal lagoons, which would not only power every home in Wales, but would also make the cost comparable with nuclear. If all six lagoons are built, they could generate about 8% of the UK’s electricity.

Accorrding to The Guardian, Shorrock says, "Economies of scale bring immediate advantage." That's because a second lagoon would require less support than offshore wind, for a renewable power supply that is both long-lived and certain. He added, "A third lagoon would be competitive with new nuclear, and comes without the heavy decommissioning costs and safety concerns."

Although the cost would be funded by electricity-bill payers, Tidal Lagoon Power still has to negotiate with the government over how much it can charge for its power. It wants £168 per MWh for electricity in Swansea, reducing to £90-£95 per MWh from a second, more efficient lagoon. The £90 figure undercuts the £92.50 price for power from the planned Hinkley nuclear station, especially since the lagoon is designed to last 120 years — and at a much lower risk than nuclear.

The company set a target of half of the £1bn capital expenditure staying in Wales. Saying that local industry will play a central role in production, it has already put together a core group of British-based suppliers, including Alstom, Sheffield Forgemasters and Atkins Engineering, with 1,850 full-time jobs promised during the construction phase. "The project will lay the strongest possible foundations for a brand new industry in which Britain can lead the world," says Shorrock.

David Tonkin, chief executive for the UK and Europe at the engineering company Atkins, said: "It is a great example of how innovative engineering could be used to harness our natural resources and provide clean, sustainable and predictable power for thousands of homes."

General Electric in Rugby, Warwickshire, and Austrian-based Andritz Hydro, both bidding for the £300 million contract to supply 16 turbines, have committed to using a majority of British turbine components, generators and even the operation of a dockside Turbine Assembly Plant in Wales. There would also be wide-ranging contracts for installation, design, and maintenance.

Welsh secretary Stephen Crabb said, “This project has the potential to transform the South Wales economy by creating hundreds of jobs and countless supply-chain opportunities for local businesses. It would also help secure our nation’s energy future and position Wales as a pioneer in low carbon technology.”

Why has it taken so long for tidal and wave energy to develop?