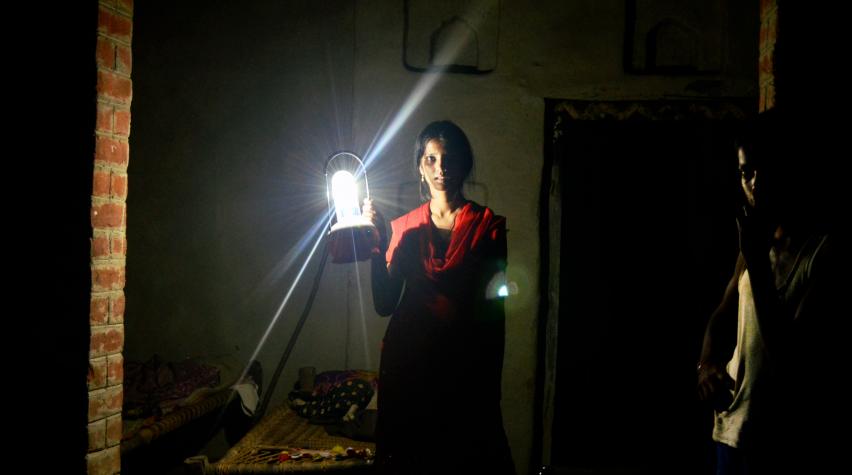 Who knew off-grid cell phones and solar panels had such perfect synergy?  By successfully yoking them together, India might finally bring electricity to over 400 million people living in near-medieval darkness. But even after two decades of explosive cell phone growth created hundreds of millions of users and nationwide networks of cell towers tying them together, there are still chicken-and-egg obstacles to overcome. Next the country has to create a robust solar industry to pick up the pace of the build-out, while finding a profitable business model to finance such a huge service expansion. Fortunately, two companies working together — one American, SunEdison, the other Indian, Omnigrid Micopower — have found a way.

Before this partnership could even happen, India's political landscape had to change. The outcome of last year's election for prime minister hinged on plans to reignite the country's sagging growth. Ever since Narendra Modi, who was Gujarat's Chief Minister for 12 years, began supplying 24/7 electricity to its cities, towns and 18,000 small villages, urban and rual productivity soared. This success swept him into office last summer. Modi may have pulled off the Gujarat miracle by rejiggering the state's transmission lines and regulatory regime, but in poor states like Bihar he wants to quickly bypass crippled power grids with distributed solar energy.

During the campaign Modi had pushed for a nationwide solar revolution (along with healthy doses of coal, wind, and nuclear) not only to boost grid capacity and stop industry-stifling brown-outs, but to help villages grow small businesses by "bringing at least one light bulb" to the off-grid homes of 400 million people.

Once in office, Modi mandated that 100 gigawatts of solar power would be up and running by 2022. This ambitious target has galvanized the country. Already, SunEdison announced that it would partner with the Adani Group, a very large Indian power developer, to build a 7.5 gigawatt solar panel factory in Gujarat. When the factory is in full production, solar modules will flood India, and other factories should follow.

While most of the panels will be heading to large, grid-connected solar farms and urban rooftop arrays, SunEdison and the Omnigrid Micropower have agreed to develop 5,000 village solar projects using surplus solar power produced to run nearby off-grid cell phone towers.

Finding the cell-phone-solar-synergy didn't happen overnight. In the past, large and small NGOs rushed in to fill the off-grid power void. Years earlier, when solar panels were still prohibitively expensive, at least 250 experimented with different technologies, from small power stations that used hydropower, or gasified rice husks, or captured methane from cow dung. After module prices dropped drastically, most flipped to solar. But successful business models are rare, and grants keep most of the programs afloat.

In 2011, even SunEdison used government funding to build its showcase Meerwada solar micro-grid, lavishly spending over $100,000 for a system that provided round-the-clock electricity, in a village where annual incomes were only $250. Nevertheless, working with the Government of India’s Rural Electrification Corporation, SunEdison has installed six more micro-grids in remote Indian villages. The company also maintains and operates and eventually transfering them to the government in five years.

Only a few companies have kicked grant funding. Mera Gao Power profitably supplies small micro-grids to over 600 villages by frugally spending $900 to install rooftop solar panels, batteries, and power lines that feed nearby homes. It's economially built in a single day. Installers arrive in the morning and leave by evening, as customers turn on their lights for the first time. Using a rare service model, households pay just 40 rupees to hook up, and 25 rupees a week for ongoing service. Mera Gao's automated system generates, stores, and distributes the power, even automaticaly turning itself on and off. A typical village can pay off the installation in about 12 months.

Omnigrid Micropower — SunEdison's new partner — has also developed a successful business model, which manages to be very different from Mera Gao's lean, close-to-the-ground approach. Omnigrid's founders, all Indian phone company vets, piggyback on off-grid cell towers that have popped up all over the country. Since many of these towers had been powered by costly diesel generators, OMC sold them cheaper solar power instead. Already guaranteed a nice profit, the company then sells surplus electricity to nearby village households and businesses.

Instead of building micro-grids like SunEdison and Mera Gao, each day OMC employees deliver charged lanterns to customers, and then return the following morning to pick up the lanterns for a recharge. “We provide a lighting solution for 120 rupees ($2) a month. In the past, kerosene would cost three to four dollars a month,” Dinesh Gupta, OMC’s head of Rollout and Operations, told Resilience.

The new partnership will use OMC's solar power plant as a template to quickly bring electricity to 10 million people. And its cell-tower technology will still supply surplus power for daily lantern charging and delivery. Access to factory panels directly from SunEdison will cut costs, and most importantly for quick expansion, SunEdison will finance each project by selling it to its "Yieldco," which holds and manages power assets spun off to free up capital.

Will this partnership cut the number of new Indian coal plants?