With a backdrop of 400 million Indians living in absolute darkness, a festive ceremony built to a climax as the oldest resident of Dharnai, India, (who'd long stopped grumbling about 30 years of government neglect) flipped a switch just as the sun went down, and villagers watched as street lights flickered on for the first time; homes, streets and the city square glowed in pools of light. Parents, no longer anxious, could actually see their kids playing down the street. Not only were 2,400 lives transformed as everyone rushed into the age of electricity, Internet and Information together, they were also living in India's first self-contained, completely solar-powered village. 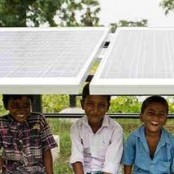 A few months ago, Greenpeace and two other NGOs started building a solar-powered micro-grid for the small village. Now online, the 100 kilowatt system serves 450 homes, 50 businesses, several schools, a health care center, streetlights, water pumps and countless, new modern gadgets. To guarantee reliable electricity 24 hours a day, there is also a battery that stores excess electricity harvested during the day for use at night.

Later, Greenpeace had a film crew interview villagers about the benefits of the new micro-grid. Everyone talks enthusiastically about activities city dwellers take for granted: cooking and eating later in the day, kids no longer studying in dim candle light, local businesses staying open longer, and much more. The segment ends at dusk as the village's new lights turn on. It's a moment that lets you experience the novelty of a ritual of modern life that will soon be taken for granted in this small village too.