Remember the 80's? For those of you who may, they're probably a little hazy this far into the 21st century. But the engineers from the University of New South Wales Sunswift solar racing team still do. They designed and built their Sunswift eVe to break a long-standing world record for electric cars that remained untouched for 26 years, all the way back to 1988, when primitive solar panels still lived on the White House roof, and Dallas, a TV show about a feuding Texas oil dynasty, was a ratings rocket -- and before most of the car's engineers, the children of Elon Musk, had even been born. 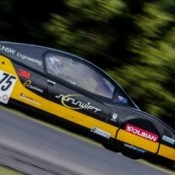 The Sunswift eVe smashed the old record of 73 km/h (45 mph), silently racing around a 4.2 km circular track in Victoria, Australia, and averaging 100 km/h (62 mph) over a distance of 500 km (311 mi). "This record was about establishing a whole new level of single-charge travel for high-speed electric vehicles, which we hope will revolutionize the electric car industry," project director and third-year engineering student Hayden Smith said in a press release.

With the car-buying public in mind, Smith and his team have deliberately over-designed the car to be a "range anxiety" killer. Before setting the current record, it had already clocked a top speed of 140 km/h (87 mph) and a range of 800 km (497 mi) by using 800 W of solar panels on its roof and hood to charge a 60 kg (132 lb) battery. (Although the panels had to be turned off for the record attempt).

With two seats and four wheels, the fifth generation of the Sunswift has evolved from earlier exotic single-seaters and could almost be mistaken for a conventional sedan. By offering 800 km from a single charge, the battery pack and solar panel efficiency mean that even if the sun isn't shining, a driver can still go the full distance.

The Sunswift team hopes to make the car ready for everyday use, and they're working towards meeting Australian road registration requirements, which they say can be reached in a year.

The UNSW Solar Racing team is primarily made up of undergraduate students from the engineering, industrial design, and business departments. Despite heavy course loads, all of the team members committed thousands of hours toward designing, building and testing the record-breaking car. This has made them one of the world's top solar car teams. Now they're probably considered the top Tesla farm team too.

Is this a great recruiting tool for the University?