A Glimpse into the Energy Scenario in Bangladesh


Bangladesh is a small country, ensconced between India and Myanmar, with a staggering population of 160 million. It's also a country where people cannot take electricity for granted: only 62% of the population has access to electricity!

Bangladesh predominantly relies on indigenous natural gas, which accounts for 89% of power generation. Other sources include coal (3.5%), furnace oil (3%), HSD (1.7%) and hydro (2.5%). Unfortunately, with gas consumption at this pace, resources are estimated to be depleted within a decade. Not that the country currently enjoys uninterrupted power: six to eight hours of power cuts are standard for people residing in rural areas.

As of 2008, power generation was 3200-3400 MW against a national demand of 5200MW. Load-shedding seems to be the only solution to curb these peaks, with the poorest being the worst sufferers. To allay these power cuts, the government turned to high cost oil-based rental and public sector peaking power plants for emergencies. If this yawning power deficit is not addressed immediately, the energy situation will only exacerbate. According to the Ministry of Power, Energy and Mineral Resources, the forecasted demand would be 19000 MW in 2021 and 34000 MW by 2030. This demand can certainly not be met with given resources, short of a miraculous gas discovery, leaving the country with no better choice than to opt for expensive alternative schemes. Lack of resources shouldn't be taking the blame alone; a history of corrupt regimes and lack of transparency equally take the blame for the unreliable and intermittent gas supply.

Before the lights go out

Bangladesh has about 3 billion tons of bituminous coal disseminated amongst five coal fields. However, coal is not being extracted, with one exception, which is responsible for the generation of 250 MW of electricity. Exorbitant cost of extraction and concerns about rehabilitation of people and adverse effects on the environment serve as a moratorium. Instead, the country relies on imported coal. Every source of energy has its concomitant problems of one sort or another. Even environmentally green technologies like solar panels involve carbon cost in manufacturing. 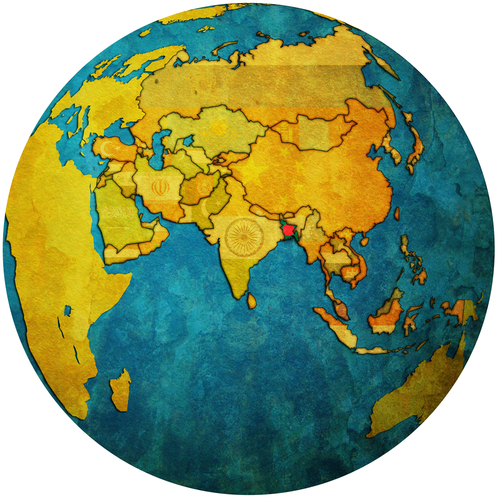 Bangladesh, nestled between India and Myanmar. Click to enlarge map.

The government's recent endorsement of a plan to build six new coal fired power plants gathered much controversy from experts and environmentalists alike, especially against the 1320 MW Rampal coal-fired power plant, located close to the Sundarbans, a world heritage site. The government plans to generate 17% of electricity from coal by 2016 and 53% by 2030. These proposed plans should get under way only after an environment impact assessment is meticulously done.

To further address the energy crisis, the government has plans to buy two 1000 MW nuclear reactors, a highly questionable move. Cognizant of the Japan nuclear crisis, the country is still going ahead with this plan. Japan, a technologically advanced nation with state-of-the-art technology couldn't avert a nuclear disaster in the face of a tsunami. In the face of a catastrophe, be it inclement weather, earthquake or a flood, populous Bangladesh would hardly seem to stand a chance. The antiquated VVER-100 model with low safety standards is itself perilous; add to that condiments such as prohibitive cost, lack of skilled manpower and no infrastructure, and it would seem a perfect recipe for a holocaust. The proposed plant location is by a river with inadequate water supplies, especially in summer months, which will not be able to meet the cooling requirements. Disposal issues of the U-236 spent rods pose a serious threat as well.

Much of the rural population, with no access to the grid, resorts to biomass such as rice husk, crop residue, cattle waste, sugarcane bagasse, and jute sticks to meet their meager energy needs. These locally available biomass could be used as feedstock to develop a mini grid; and by net metering, it could complement the grid while financing the needy, thus genuinely benefiting both.

Harnessing wind energy near coastal areas has the potential to generate 100-200 MW of electricity. With an average solar radiation of 4-6.5 kWh/square meter/day, solar panels could serve grid areas currently relying on candles, lanterns, and kerosene lighting. According to the Renewable Energy Policy, the government hopes to generate at least 500 MW from solar energy. Currently only 50 MW is being generated from renewable sources. Investing in renewable sources could provide the rural community with a sustainable, clean, and affordable source of energy, without any impact on the climate change.

With the right energy-mix and energy-planning this energy-poor nation can tackle its energy poverty. And whatever the solution, it will take require of chemical engineers to get the job done.

Can chemical engineers help provide the answers for Bangladesh?

Sir,is it possible to fix a huge web of water pipe line since it is near to bay of Bengal with a suitable pressure and therefore settling a motor and a turbine into those canals as a result we can create generous amount of electricity.