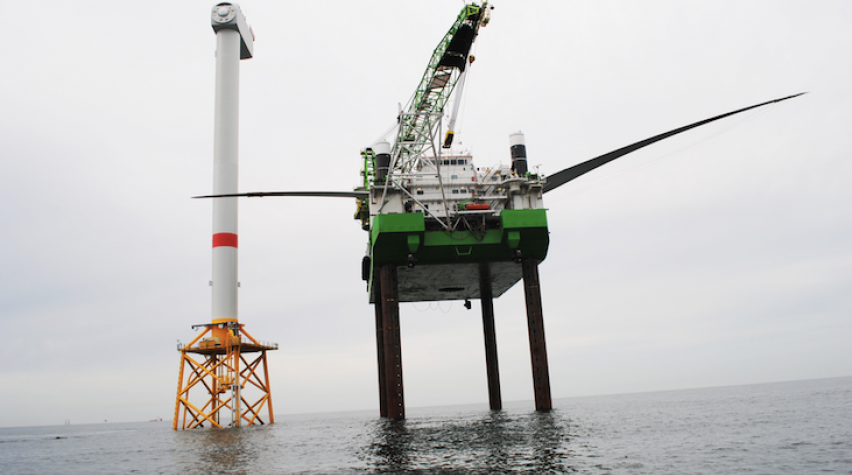 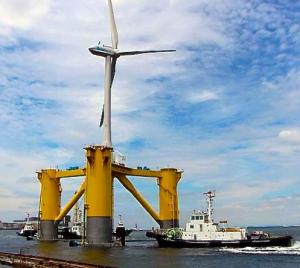 In the deep waters off the coast of Fukushima, Japan, just twelve miles from the infamous, damaged nuclear reactors which have been shut down since 2011, an experimental 2,000 kw floating wind turbine and connected substation - both anchored to the seabed - send wind power to the grid, signaling a breakthrough for the struggling nation.

Powering just 1,700 homes, this solitary turbine's effect seems puny, but the project's ambitious goal is to generate over 1 gigawatt of electricity from 140 offshore wind turbines by 2020. This would not only make up for one of Fukushima's defunct reactors, but possibly alter Japan's near total reliance on fossil fuels and nuclear energy, while also reviving a moribund economy.

The project, with Mitsubishi Heavy Industries adding two more 7,000-kilowatt turbines next year, is a joint public-private undertaking by the Economy, Trade and Industry Ministry, the University of Tokyo, and 10 major industrial enterprises.

Norway, Portugal and the United States also have small, experimental floating wind demonstration projects, but Japan's 140 turbine array is expected to be the largest to fully commercialize the technology.

But at this point, cost is still a big issue. Building the first three turbines will come to 2 million yen, or about $20,000 a kilowatt, eight times as much as the cost of building a wind turbine on land. But the all-Japanese consortium says it hopes to bring that cost down with increasing economies of scale and design improvements. A video from Japanese TV explains:

With 50 shuttered nuclear reactors, which had provided about 30 percent of the country's electricity, all of that missing nuclear energy had to be replaced. Soon after the March 2011 disaster, the country began increasing LNG imports. Today, the energy-poor nation has become the world's leading LNG importer. The remaining shortfall has been made up by petroleum--crude oil and heavy fuel oil. According to Mother Jones, Britain histrionically called the move "deeply disappointing." China's climate negotiator, Su Wei, mugged, "I have no way of describing my dismay." The Alliance of Small Island Nations, which represents islands most at risk of sea level rise, branded the move "a huge step backwards." This environmental shaming was hypocritical since Japan's decision was hardly a surprise. This dramatic graphic quickly summarizes Japan's energy story :

The jump in oil and gas imports underscores the country's energy dependence. Excluding hydropower, less than 3 percent of the electricity it generates came from renewable energy. But TEPCO has more bad news. Under pressure to produce more power, the bumbling nuclear plant operator has partnered with Mitsubishi to build cutting edge, coal-based, integrated gasification combined-cycle (IGCC) stations, which should increase power output by 20 percent over conventional coal power plants. These new plants will create a syngas, which is burned in a gas turbine. Then the waste heat from the gas turbine is recovered to create steam, driving another turbine and producing even more electricity.

Improving energy efficiency extracted from coal - a one percentage point improvement in the efficiency of coal combustion plant results in a 2-3% reduction in CO2 emissions - is still no match for nuclear, wind, or solar. Ironically, the coal gasification plants will come online around 2020, about the same time the floating turbine wind farm will be fully operational.

In the past, Japan hadn't developed offshore wind power because it lacked the shallow coastal waters filled by Europe's burgeoning offshore wind farms. Fixed to the seafloor, a 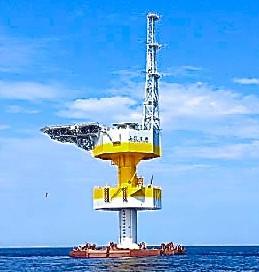 traditional wind turbine becomes too expensive in waters deeper than 50 meters. This had been an obstacle for Japan, surrounded by a continental shelf that drops rapidly from 50 to 200 meters, but the new floating wind turbine and substation can operate in much deeper waters.

According to computer simulations by Tokyo University researchers, harnessing wind in deeper waters off Japan could generate as much as 1,570 gigawatts of electricity, roughly eight times the current capacity of all of Japan's power companies combined.

With so much potential upside, Japan's government has invested $226 million toward installing the first turbine and two additional turbines. If testing goes well, the private coalition that includes firms such like Marubeni, Mitsubishi, and Hitachi will pay to install the remaining 137 floating turbines.

Momentum is building for the project, according to the New York Times. Success could 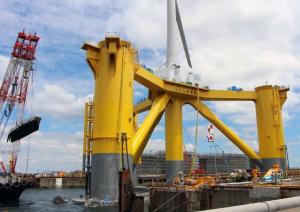 revive industries that Japan has lost to China and South Korea, creating a vital new economy. For example, the long chains anchoring the turbines to the seabed use 20,000 tons of steel from Nippon Steel and Sumitomo Metal. After a enduring a stagnant decade, the potential economic stimulus excites Japanese politicians and industrialists. Yasuhiro Sato, president and chief of Mizuho Financial Group, said that the 20,000 parts used in offshore wind turbines could add billions of yen to Japan's economy.

So the stakes are high, and the final one-gigawatt wind farm planned for completion in 2020 could contribute about 7 percent toward the Fukushima Prefecture's goal of using 100 percent renewable power by 2040.

This is an interesting idea. I wonder how they will handle storms or rough seas. I also wonder how difficult it will be to maintain them as well as the cost since ocean water is, well, corrosive. Plus, techs will have to travel out to the equipment, I guess, by boat.