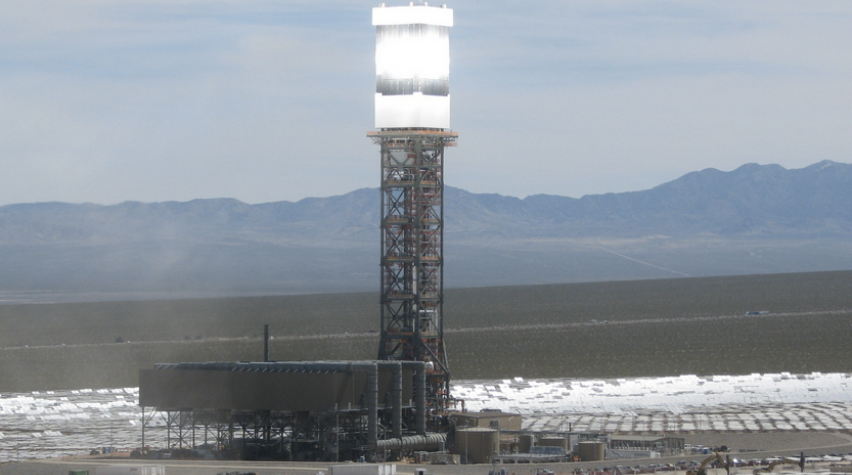 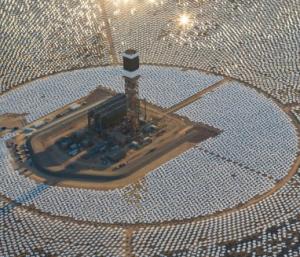 Last Tuesday, fresh electrons began flowing across the California power grid; they were coming from the Mojave Desert about five miles from the California-Nevada border, where the Ivanpah Solar Electric Generating System produced its first energy after Unit 1 was synced to the power grid. Jointly-owned by NRG Energy, BrightSource Energy, and Google, this critical "first sync" was a major milestone. After having spent years and billions of dollars building Ivanpah, the sync ceremony had a heightened significance for Tom Doyle, president of NRG Solar, who explained, "Given the magnitude and complexity of Ivanpah, it was very important that we successfully show all systems were on track." Once fully operational, the entire three-unit, 392-megawatt plant, using proprietary software to control 173,500 heliostats, will be the largest solar thermal plant in the world, spanning 3,500 acres of public land and generating enough electricity to power 140,000 homes. "At Google we invest in renewable energy projects that have the potential to transform the energy landscape. Ivanpah is one of those projects," said Rick Needham, director of energy and sustainability at Google. But the sync ceremony was just the highly publicized end of a long commissioning process. (Watch a virtual tour to appreciate the project's vastness.) First Flux Months of prep went into Ivanpah before it could be successfully synced to the grid. In late February, BrightSource reached a milestone after more than one thousand computer-assisted heliostats focused enough light onto the solar receiver to create the "first flux," heating boiler water to a point just below steam generation. Before this "first flux," the highest number of heliostats ever aimed at the boiler had been 5-10 - which had been done just for calibration. 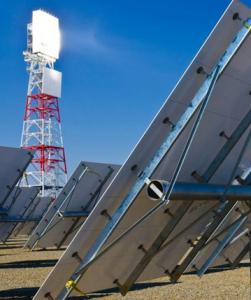 During the next month, adding more flux (heat) caused the boiler to begin producing enough steam so the pressure could be tested, which prepared the system for the "steam blows." The Steam Blows In May, the plant finally began "steam blows," when thousands of heliostats focused light on the solar boiler, and hot steam cleared out any construction debris remaining inside the pipes that might cause damage during operation. Small targets placed inside the pipes were checked, and the process repeated, until all small particulates had been removed. Steam blows are an important part of "load ascension," gradually increasing the number of heliostats focused onto the boiler to raise the temperature and steam pressure until it's finally injected into the turbine. Once the turbine is spinning, the system is synched to the grid and electricity is sent to customers. Watch a short recap of the construction

Part of the appeal of Ivanpah's technology is its old/new nature. "We're combining innovative technology with traditional power-block technology to produce carbon-free, renewable power," Joseph Desmond, senior vice president of marketing for BrightSource, told the Daily Beast (A power-block facility includes a steam heat exchanger, steam-turbine generator, and the electrical equipment in a substation.) "When you're talking about fossil fuels, you have to factor in exploration, extraction, 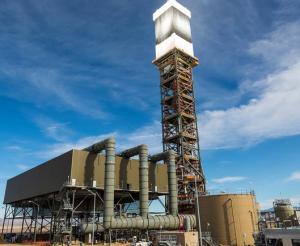 processing, and then transportation," he said. "People sometimes forget this is actually a very efficient utilization of a sustainable energy resource." Still the fate of this type of solar technology is uncertain. These concentrated solar plants (CSP) are coming online at the same time because they were started around 2009, when the federal stimulus loan guarantees for clean energy were still available - before the Solyndra PR debacle, before photovoltaic panel prices dropped, and before the price of natural gas nose-dived. Ironically, today, most of the newer CSP projects are happening in places like Saudi Arabia, South Africa, and China, where natural gas is still expensive.

Although Ivanpah doesn't have energy storage, if concentrated solar survives, it will include a variation on molten salt storage that makes it easy to store energy for later use, something wind turbines and solar panels - which are cheaper - can't do. While a smarter power grid will redirect power from renewable sources to where it's needed, most in the industry think that some reliable, "dispatchable" power will always be required. Right now that's the role of coal, gas, nuclear, and hydroelectric. The CSP industry is hoping future storage-enabled plants will join that list. A BrightSource video shows the components of the complete system:
As BrightSource considers storage for future plants, currently, two other large CSP plants are under construction with energy storage. A 280-megawatt plant in Arizona will store excess heat in vats of molten salt, allowing it to provide energy six hours into the evening. A 110-megawatt plant in Nevada will provide 10 hours of storage.
A National Renewable Energy Laboratory report from earlier this year found that CSP with energy storage could help California meet its goal of getting a third of its energy from renewable sources by 2020.

Will many utilities use concentrated solar for baseload power?