Jeff Surma, a chemical engineer by training and now something of an energy visionary, has not only proven that InEnTec, his small startup, can profitably vaporize garbage by turning it into grid power, he's also convinced that the process could scale up nationally. Waste Management Inc., the nation's largest trash hauler, already produces over 550 megawatts of electricity from biogas, and is always looking to reduce the mountains of garbage piling up in its landfills. 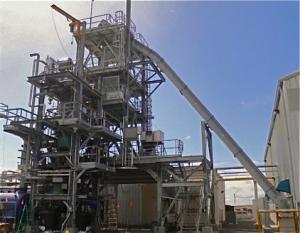 The company has invested in Surma, building him a demonstration plant, which is the first commercial facility in the US to use plasma gasification to convert municipal garbage into clean, renewable energy. Since Surma had already spent many days showing visitors from the power and chemical industries around his plant, and explaining how electrodes create an electric arc hot enough to blast municipal waste into syngas, he was invited to give the same talk at "Solve for X," a series organized by Google to explore ideas that might solve some of society's seemingly intractable problems.