Is the Shape of the Solar Future about to Change? | AIChE
Skip to main content

Is the Shape of the Solar Future about to Change? 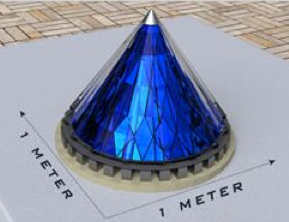 The gale-force storm of internet Hype is starting to clog bandwidh so badly that LOLCats addicts are starting to complain. V3Solar, a Southern California startup, says that it has invented and is now commercializing the first major change to flat panel PV technology in decades - and calling it the V3 Spin Cell. Their website boasts, "For too long, the world believed solar was flat," wrapping cool technical innovations into an ironic early-adopter slogan as elegant as the Hollywood sci-fi design virally fueling the Internet links propagating like Justin Beiber retweets.

The mind-boggling Claim, reported by Zachary Shahan at Clean Technica: V3 Solar says the Spin Cell can produce power with a levelized cost of energy (LCOE) of 8? per kWh. (The average cost of energy in the US is 12? per kWh and 28? from solar PV.) If true, that's a stunning leap in efficiency, and it could revolutionize the solar industry, hastening grid parity (a technical review).

But can this technology live up to its claims? Check out the video in the panel at right and decide for yourself.

If real, will this unseat the traditional PV module?

Cool idea. I hope this works and brings down the price of <a href="http://www.solarsystemsma.com/how-do-solar-panels-work.php" rel="nofollow">solar energy</a>.