More sunlight strikes the earth in one hour than all of the energy currently consumed on the planet in one year. As the world's energy consumption rate is projected to double by 2050, and triple by 2100, the sun holds great potential as a sustainable energy source.

Dr. Alan W. Weimer of the University of Colorado, Boulder, proposes harnessing this solar energy and to produce the high temperatures necessary to drive strongly endothermic chemical reactions. In these systems, the solar energy would not need to be converted to electricity, thus rendering them more efficient than competing solar technologies. 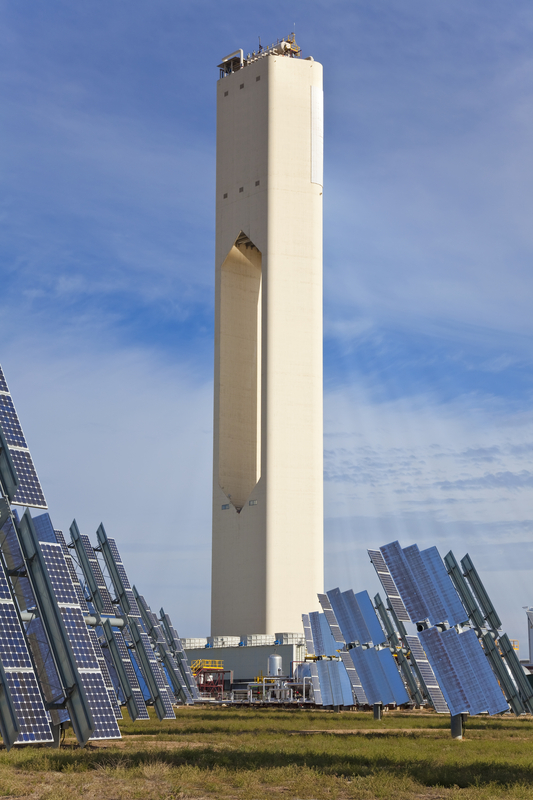 In a solar tower system, a field of mirrors surrounds a central tower and directs sunlight toward it.

A solar tower system is the most practical technology for delivering large power levels to a solar chemical reactor. These systems concentrate sunlight and have the ability to produce temperatures up to 5800? K. In a solar tower system, a field of mirrors surrounds a central tower. Every mirror, or heliostat, has a small range of motion to follow the sun's path - the motion is usually computer controlled. To calculate the amount of power that is delivered from a solar field to the reactor, the interaction between tower height, field layout, heliostat design, and secondary concentrator must be modeled.

The primary challenges for widespread solarthermal chemical processing are both technical and economic. There are huge costs associated with the field of heliostats and the thermal shock- and oxidation-resistant high temperature materials for fabricating solar receivers and reactors. There are also obstacles involved with accommodating for the diurnal nature of sunlight, and competing with low-cost fossil fuels.

The most promising near-term commercial solarthermal chemical process is the production of carbon black. Carbon black is a nanosized, amorphous substance that is frequently used in the production of tires. It is synthesized with the reaction: CH4 -> C + 2H2. Weimer's team has demonstrated that in this reaction, the decarbonization of methane can be carried out at temperatures above 1700? K in hundredths of a second using a solar reactor.

For any likely process, low cost natural gas can be used as a supplement to solar energy to provide continuous heat. Instead of low-cost fossil fuels and sustainable solar energy being in competition with one another, Weimer contends that a combination of the two may prove beneficial in upcoming solarthermal chemical processes.

Can you see this type of solar power gaining widespread adoption?