Hundreds of years from now, barring earth's accidental obliteration from asteroid driveby, how will computer software tycoon Bill Gates be remembered? As a paragon of 20th century innovation? Certainly. But for innovating what? Creating the world's most popular computer operating system? Standardizing global business through Microsoft Office? Halo couch potato mayhem? Or maybe, simply reinventing the toilet? Sure, smirk, but that only shows how complacent you are about the 400 year old throne hunkered down in your bathroom with the entitlement of a British Royal, and, although it's simple to use - go, flush, and gone - it's not very efficient, guzzling gallons of precious water with every flush. So much so, that for 2.5 billion of the world's poor, requiring any water at all to operate this relic has forced many into unsanitary options. And Gates wants to end that; so no matter how much you may lionize Steve Jobs, he never got around to changing anything this profoundly necessary. 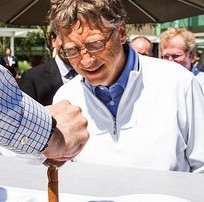 Leap-frogging beyond the suburban bathroom

Bill Gates launched the Reinvent the Toilet Challenge (not a TV reality show even though it sounds like one) only a year ago, and last week he announced the winners. The awards recognized three research groups that had spent an intense year developing new technologies to adapt the ubiquitous, elegantly simple, suburban toilet to extreme poverty, life without plumbing or city infrastructure, and locations far off the grid. The initial challenge was simple, yet nearly impossible: to create a toilet that could capture and process human waste without piped water, sewer or electrical connections, and then transform it into useful resources, such as energy and water - at an affordable price of five cents per user per day (the engineering holy grail). 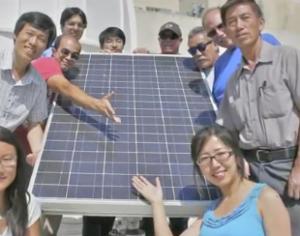 Conceptually, researchers traveled a long way from the suburbs - further than even Americans living in poverty can imagine. Leap-frogging beyond the modern bathroom, most of the prototypes displayed at the Gates Foundation's Seattle headquarters can turn solid waste into energy. That trick alone should make you dissatistifed with your old and outmoded commode, where every time you flush, you're sending wasted energy wooshing down the drain. An engineering team from Caltech edged out seven other global teams (press release), and was awarded $100,000 (local news video). Caltech engineer Michael Hoffmann's design uses solar power to run an electrochemical reactor that breaks down human waste to produce hydrogen gas, which can be stored and used to run the reactor at night or on cloudy days. (Video of several teams, including the winners from Caltech at the beginning.) According to an AP story, not every project was so high-tech, including one from the London School of Hygiene and Tropical Medicine, which was already undergoing field testing in South Africa. It sends black soldier fly larvae inside latrines to process waste, resulting in high quality animal feed at a cost of a penny a day. 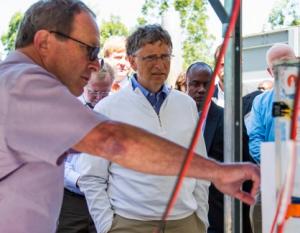 In Durban South Africa Gates saw the enormity of the problem

Speaking to the press, Gates explained: "All the participants are united by a common desire to create a better world - a world where no child dies needlessly from a lack of safe sanitation. " But Gates didn't always understand the size of the problem. Not until his trip to Africa (writing in his Foundation's blog):

In 2009, (video) during a trip to South Africa, I met with a health expert working to improve access to sanitation for the poor people of Durban. Most of the poor people in Durban (and elsewhere) are denied the convenience and health benefits of flush toilets because they don't have access to water. 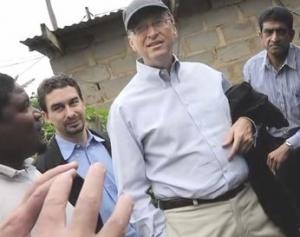 After returning to the US, Gates did a lot of Googling: accessing statistics from the World Health Organization that showed 2.5 billion people around the globe are without access to sanitary toilets, resulting in the spread of deadly diseases. Every year, 1.5 million people--mostly those under the age of five--die from diarrhea. Gate's key realization was (also in video form): 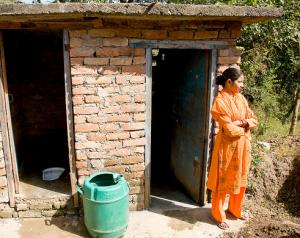 The flush toilets in the wealthy world are irrelevant to 40 percent of the global population, because they often don't have access to water, and sewers, electricity, and sewage treatment systems. Worldwide, there are 2.5 billion people without access to safe sanitation - including 1 billion people who still defecate out in the open and more than 1 billion others who must use pit latrines.

So then last summer, Hoffmann, a Professor of Environmental Science at Caltech, and his team were awarded a $400,000 grant to create their revolutionary toilet. Because the new toilet couldn't use a septic system or outside water source, or produce pollutants, the Caltech toilet relied on the sun to power an electrochemical reactor to break down water and human waste into fertilizer and hydrogen. The treated water can then be reused to flush the toilet or for irrigation.

The team built a prototype inside the solar dome on the roof of Caltech's Linde + Robinson Laboratory, and after a year of designing and testing, they showed off their creation for Gates last week. A side note: to add authenticity and insure consistency, the Gates Foundation even brought in 50 gallons of fake feces (see video and article) made from soybeans and rice for the demonstrations. Now watch a short Caltech video about their toilet:

According to the Seattle Times, other than the solar panel used for energy, Caltech's design looks like a regular toilet, at least to the user. But after the waste is flushed, it passes to a holding tank under the floor, solid material settling out and sinks to the bottom, leaving the liquids on top. After the liquid reaches a certain level, it flows through a tube into the "sun-powered electrochemical reactor," where the reaction oxidizes the chloride in the urine, killing microorganisms. Next, the treated water is filtered and reused the next time someone uses the toilet. The hydrogen, meanwhile, could be siphoned off, and the toilet's owners could "use it as you would use gaseous propane" for cooking, he said.

The $60,000 second place prize went to M. Sohail Khan of Loughborough University in the UK. He and his colleagues developed a toilet that transforms urine and feces into clean water and biological charcoal, which can be burned. In response to the announcement, Professor M. Sohail Khan said, "It was the opportunity of a lifetime to present our research to Mr. Gates and we are extremely honored to receive this prestigious award."

Third place and $40,000 went to Yu-Ling Cheng of the University of Toronto in Canada and her colleagues whose design is novel in its simplicity. It uses a sand filter and UV-ray disinfecting chamber to process liquid waste in a smolder chamber, similar to a charcoal barbecue. The result is easy to use, while protecting the community from contamination. A video fully explaining the design can be found here.

Wrapping up the day, "Innovative solutions change people's lives for the better," said Bill Gates. "If we apply creative thinking to everyday challenges, such as dealing with human waste, we can fix some of the world's toughest problems."

The foundation expects to field test its first prototypes within the next three years.

Do these toilets erase painful memories of the Blue Screen of Death?

Long overdue. Considering the most recent advancement (running water) is, as you said 400 years old and that was the first improvement since Romans introduced sewers. Unfortunately, advancements in developed countries (like waterless urinals, composting toilets, and grey water reuse) are being held back by coding writers stuck in the 1900s. On a side note, I don&#039;t think Bill Gates is allowed to Google for anything, even WHO health statistics.