Biorefinery Could Help Move US Navy and Hawaii Off Imported Oil 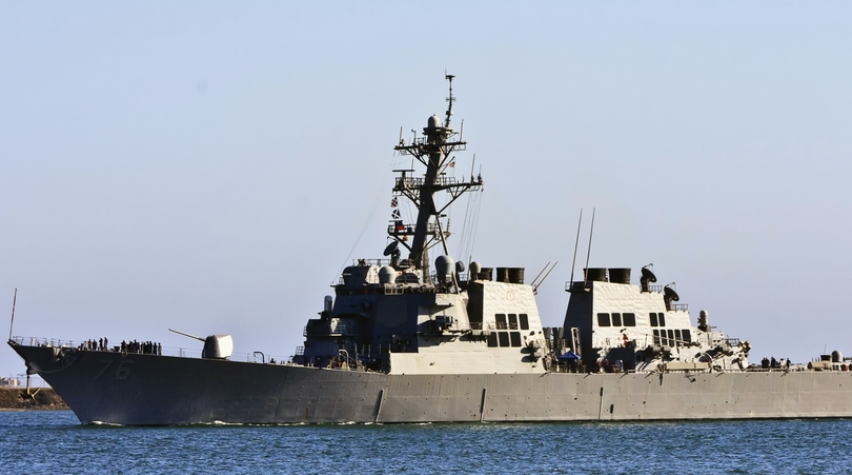 As the US Navy successfully winds up the first "Great Green Fleet" maneuvers off Hawaii, with a nuclear carrier group supported by ships and aircraft burning a 50-50 biofuel blend, UOP, a subsidiary of Honeywell, is building the nation's first dedicated biorefinery on a former pineapple field outside of Honolulu. While Hawaii has been a hostage to tanker-delivered oil for gasoline, jet fuel for planes, and oil burned in outmoded power plants, the military is easily the biggest user of oil on the islands. Between civilian and military use, the state imports 45 million barrels of oil a year, which is getting progressively more painful as global oil prices rise. UOP's new biorefinery will make "a fuel which can be used in power generators, boilers and marine engines," says chemical engineer Jim Rekoske, VP and biofuel guru at UOP. By next year, he hopes to have the biorefinery in place. (Read an earlier interview with Rekoske about UOP's process.)

As a demonstration plant, the new refinery will initially produce just five barrels of biofuel a day, which, as stipulated by the $25 million DOE grant, will be given to anyone willing to test it. But once this facility is up and running, it will convert about 1,000 M tons of biomass a day into fuel; the final commercial-scale facility 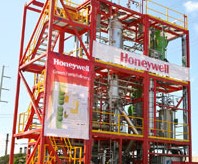 will vaporize and then condense 50 million gallons of fuel a year. The heart of the new refinery is a fast pyrolysis process to transform inedible biomass. Then, after the biomass has been ground into a fine powder, it will float through a chamber where sand heated to 500? C flashes it into oil vapor in milliseconds. After the hot vapor exits, the solids (char) drop to the bottom and burn to reheat the sand. "There is enough heat in the combustion of the char to heat the sand up to a high enough temperature to run the pyrolysis process," Rekoske told Scientific American. The oil vapor, after exiting the rapid pyrolysis, is condensed into liquid fuel, upgraded and processed to make a green fuel similar to the bunker fuel that is used in navy ship engines and industrial boilers, but it lacks the pollution-causing sulfur common to most bunker fuel. This short corporate video (using technology from Enysys Corp) visualizes the process:

The Navy and Hawaiian businesses are eagerly waiting for this fuel. And next year, once the full biorefinery is complete, UOP will be able to make everything from gasoline to jet fuel. "The idea is to make a whole barrel of product out of the biorefinery," Rekoske says.

Cost a major issue for the Navy

Unfortunately, we're still talking about replacing 45 million barrels of oil. This biorefinery's output will satisfy only a fraction of Hawaii's annual oil use. As an example, 900,000 gallons of biofuel were used during the Green Fleet exercises. For Hawaii to achieve energy independence (still quixotic at this point), the state would have to build many more biorefineries - and grow much more biomass.

Next, cost has become a major issue. Many Congressmen in Washington, D.C. have criticized the biofuel program and the Green Fleet because the fuel, still produced in very small quanities, is so expensive - even though the price has been falling rapidly. While the Pentagon paid $424 a gallon in 2009 for first 20,055 gallons of biofuel, for the Green Fleet demonstration, the Pentagon paid $27 a gallon. "Of course it costs more," said Secretary of the Navy Ray Mabus, reported Reuters. "It's a new technology. If we didn't pay a little bit more for new technologies, we'd still be using typewriters instead of computers. And the Navy would never have bought a nuclear submarine, which still costs four to five times more than a conventional submarine." Watch short interview with Sec. Mabus days before the green fleet sailed:

A Defense Department study noted the Pentagon could speed up creation of a competitive biofuels market by providing certainty to growers and helping manufacturers gain access to capital to build refineries. And some industry players believe Mabus is correct about the Navy using its purchasing power to create competitive pricing. Recently, Green Car Congress reported that the USDA and the Navy will provide $30 million in funding to match private investments in commercial-scale advanced drop-in biofuels. The program envisions a investment of up to $180M. Only time and technological breakthroughs will tell whether the price is right.

How will costs effect the future of this debate?

If things go well enough, it won&#039;t just be the navy who&#039;ll benefit from that. Even the common Joes skippering <a href="http://www.spellmansmarine.com/" rel="nofollow">sea ray used boats</a> will feel the benefits eventually.

Plus + hawaii already has a pretty active biodiesel community. Another refinery just opened in the islands. It uses cooking oil as a feedstock. Loosely affiliated with Willie Nelson and his biobus.