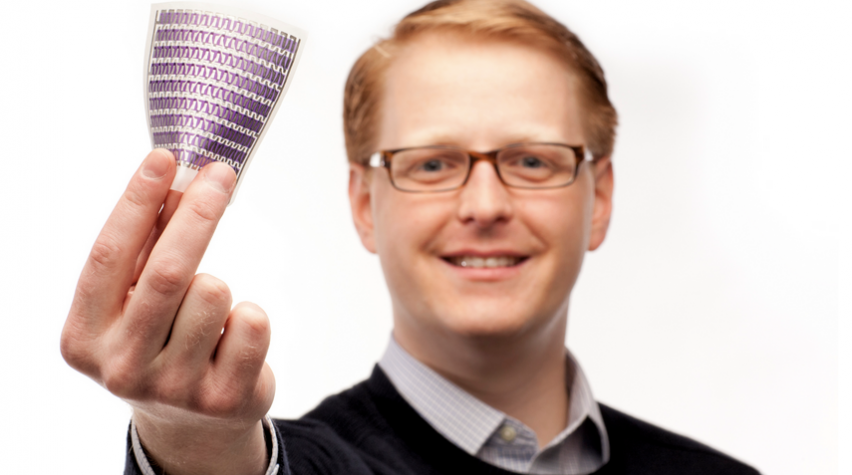 Miles C. Barr, who recently received his PhD in chemical engineering from MIT, has just been awarded the prestigious $30,000 Lemelson-MIT Student Prize for developing an innovative solar technology. Barr's breakthrough (press release): a new way to print solar cells directly onto a variety of common, everyday surfaces. His innovation could reduce the cost of solar energy by eliminating the need for special installation. Additionally, the technology is almost as easy as inkjet printing a snapshot from a computer. Afterwards, you can fold it up, slip it in your pocket, and then unfold it again later. Watch a short lab demo:

The printing process uses low-temperature vapors (less than 120C/ 248F) to transfer fine layers of photovoltaic cells onto a surface, according to an earlier press release. The layers are sprayed onto the same sheet of paper during several passes in a vacuum chamber, "creating a vapor-deposition process that can be carried out inexpensively on a vast commercial scale," according to MIT. "There is a huge opportunity to harvest energy from the light that hits every surface around us," Barr said. The technology will make way for much more inexpensive power generation, which he hopes will intake off in the U.S. and the developing world.

Science not really his favorite subject

A risk-taker, according to his bio, Barr always refused to be constrained by arbitrary, conceptual limits, immersing himself in a wide range of subjects - and actually completing majors in chemical engineering, mathematics and music as an undergraduate at Vanderbilt. Miles explains himself.

Even as a child, whose early "inventions" included a hovercraft built from a vacuum cleaner and a porch table, when the local news asked Barr about science, he responded, "It's not really my favorite subject." Barr had many interests, fueled by a fervor for creating things. He relished taking an object apart, and then putting it back together in a new way.

Flourishing in the MIT ecosystem

While Barr's manic inventiveness may have matured, his passion for diversity has remained his core approach to invention. Later, he flourished in the "the great ecosystem MIT offered entrepreneurs starting commercial endeavors." After seeing other students' technologies go to market, Barr co-founded Ubiquitous Energy, Inc. in 2011. Barr realizes that he owes his success to numerous mentors and is committed to paying it forward by mentoring diverse groups of engineers and musicians. He has also served as the head teaching assistant for the Chemical Engineering Projects Laboratory at MIT, where he managed 40 undergraduates in semester-long projects. "Miles is without question one of the most creative and imaginative doctoral students I have advised in my 23 years as a professor at MIT," said Karen Gleason, Barr's advisor and professor of chemical engineering at MIT. "His imaginative demonstrations readily communicate the import of his research to a general audience, and are a source of inspiration to the next generation of aspiring scientists and engineers."