In Europe, along with its now ubiquitous solar installations, offshore wind is the great blustery hope among the political class, with new projects announced weekly. But lately, scientists, particularly in Scotland, have begun to pay attention to the waves rolling beneath the huge, rotating blades, as they make their way to the coast. Massing ocean waves hold 40 times more energy than air moving at the same speed. Even foamy beach rollers can knock novice waders off their feet and into the water, demonstrating the energy stored inside each wave, which is finally dispersed after gently fanning out and sinking into one of the sandy beaches found along Scotland's rocky coast. The estimated cost of today's harvested wave energy is almost three times the cost of offshore wind, according to a study by the Carbon Trust. This UK non-profit predicts that by 2050 this form of alternative energy could yield as much as 190 gigawatts of electricity, which is more than three times today's total electric output in the UK, where most wave energy research already takes place. Although still a very small global industry, at least 100 companies are already researching and building wave energy devices. 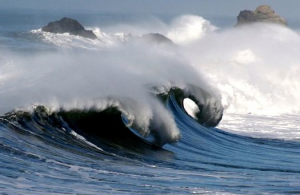 Pelamis Wave Power is already providing energy to the grid

The original 400 feet-long, four-section mechanical Pelamis P1 was developed by the Scottish Pelamis Wave Power Company (website). It was one of the first energy harvesters to send electricity to the grid. Ironically, the P1 wasn't sited off Scotland's coast. More than three years ago, Pelamis engineers set several machines side by side off the coast of Agu?adoura, Portugal, where they powered more than 1,500 homes. This system also saved about 2,000 tons of CO2 each year that would have been emitted from a conventional combined cycle gas power station. You can watch a video of the Aguçadoura site, above. 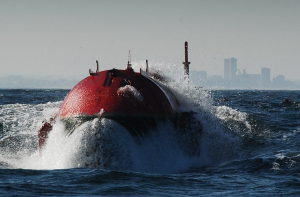 In the alt-energy business, this energy harvester is called an attenuator. Operating in depths greater than 150 feet, the Pelimas P1 is found three miles from the coast. The front of the long floating device is attached by cable to the ocean floor (see CGI animation), allowing it to swing and sway and remain perpendicular to oncoming waves. As the waves pass along its length, the large individual sections--similar in size to railroad or subway boxcars--move up and down, creating movement that is converted into electricity (CGI animation). 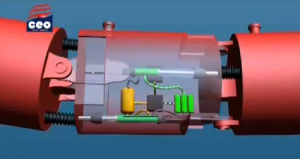 The machine has four sections and three hinged, universal joints which allow flexing motion in two directions. Each joint has a compact power module, analogous to the nacelle of a wind turbine, which houses the power takeoff equipment. This includes the motor-generators, accumulators, and hydraulic cylinders. In 2008, the Portugal wave energy project was commercially feasible due only to the country's feed-in tariff that provided long-term incentives for the utilities to invest in renewable energy. But with advances in the technology, wave energy proponents believe it could be cost-efficient within 15 years.

Scotland is the Saudi Arabia of wave energy

Pelamis Wave Power of Edinburgh is currently testing its second-generation attenuator at the European Marine Energy Centre off Scotland's Orkney Islands where the North Sea collides with the Atlantic Ocean, making it nature's perfect laboratory. (For the skeptical, here is a live feed of local wave activity). Scotland's First Minister Alex Salmond told the BBC that the Orkney site was a "major milestone." He said the waters had been described as the "Saudi Arabia of marine power" due to their "rich natural resources" (a comical euphemism to the locals). A big selling point for Orkney is that it's linked to Britain's power grid, so electricity generated there can reach the national market without laying new costly cables. And Scotland's Pelamis Wave Power has already launched a retooled version of the Portuguese-sited P1. The newest device, known as P2, is 590 feet long, 13 feet in diameter, and weighs 1300 tons. Watch the P2 as it's built in the factory to get a sense of the project's scale:

For all its impressive size and retro shape, the inside the P2 operates more like a data center than an ocean vessel (more Google than Jules Verne contraption): Duplicate server racks, fibre-optic communication systems, and emergency power supplies allow programmers to upload software on the fly without interrupting power production.

And while the hardware (the metal hulls and compression rams) have been upgraded from previous prototypes, it is the algorithm controlling them that makes the difference, decreasing resistance in the rams when waves are small and increasing it when they are larger."It's the active control of these algorithms that allows us to tune the machine to be in resonance, regardless of wave conditions," says Pelamis engineer Ross Henderson explained to the BBC. As a result, the P2 produces twice as much as prior prototypes.

One of the most promising new devices, according to a three-year study by The Carbon Trust, is the "Anaconda" by Checkmate Seaenergy, based in Sheerness, Scotland. Still essentially in the research stage, it radically simplifies the Pelamis P2 design by using a very large, water-filled, distensible rubber bulge-tube floating just beneath surface waves, which eliminates the need for complex electronics, software, and compression machinery. As a wave passes overhead, the bulge-tube is lifted by the surrounding water, causing an internal bulge to pass down the tube's diameter like a large animal eaten by a tropical snake--hence the name "Anaconda." Arriving at the end of the tube, the bulge wave energy surge drives a turbine. Watch a CGI of the Anaconda:

Wave tank tests (see video) on a 26-foot prototype have proven that the Anaconda works. A full-size Anaconda will measure up to 656 feet in length and could potentially produce 1 megawatt of power--enough for a thousand homes. Checkmate plans to move into commercial production by 2014. 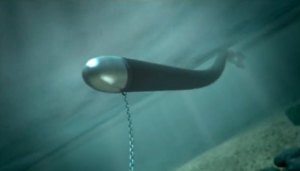 The Oyster wave power technology converts near-shore waves into energy through a wave-powered pump attached to the seabed, roughly 10 to 15 meters deep 500 yards from the shore. The movement of the Oyster's buoyant hinged flap drives two hydraulic pistons to push high-pressure water onshore via a subsea pipeline, where this water drives a conventional hydroelectric turbine. An article in Renewable Energy World explains that the benefits of the Oyster device lie within its simplistic structure that is engineered to survive violent weather conditions and shore-based electricity generation: minimal underwater moving parts; no control system, gearbox, or shutdown mode; and no complex offshore electronics. 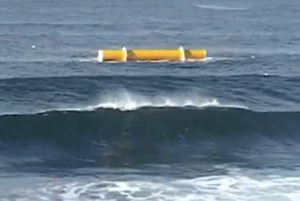 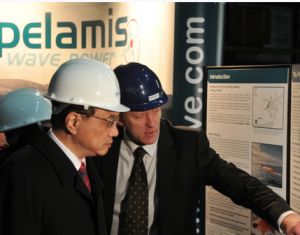 What's a reliable indictor of Scottish wave energy success? Recently Pelamis Wave Power hosted a Chinese trade delegation led by Vice Premier Li Keqiang, giving him a firsthand demonstration of their technology. The tour of the manufacturing facility included the testing and assembly areas where the power modules of a new P2 Pelamis were under construction for deployment later last summer. If the solar power and wind energy trends are any indication, soon the Chinese will be buying Pelamis' P2 or Aquamarine's Oyster 800 wave technologies and then eventually introducing their own improved versions.

Does wave energy have a chance for success ?