The future of offshore wind energy was just towed by tugboat and moored 217 miles off the windy coast of Portugal, far from the shallow coastal waters that are the normal habitat of fixed offshore turbines. "Portugal has very good wind resources and is trying to distinguish itself from the rest of Europe with renewable energies," Dominique Roddier, one of the platform's designers, told his Berkeley, his alma mater. Roddier also said the Windfloat concept radically transforms offshore platforms, tapping previously inaccessible deepwater sites. 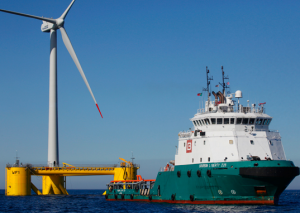 This is necessary because shallow waters of 90 feet or less, which allow developers to sink foundations in the coastal seabed, are either rapidly being developed in Europe or relentlessly challenged in the U.S. The press release from the floating turbine's builder, Seattle's Principle Power, also touts it as the first floating offshore wind turbine that doesn't require heavy-lift equipment for final assembly at sea--a poke at their major competitor, Norway's Statoil, whose Hywind (video above) at-sea-assembly (video), they claim, is more expensive, time consuming, and hampered by unpredictable weather. 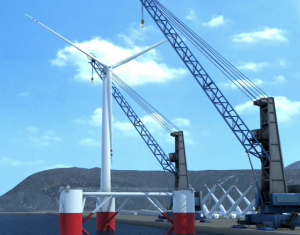 Before the completely assembled Windfloat was towed out to sea, all of the work took place dockside, speeding up the fabrication and significantly cutting project costs. The most visible parts of the rig, the mast and turbine, were easily integrated into the platform. Watch a time lapse of the construction, and check out employees discussing the project during construction:

Once out at sea and installed by a Bourbon Company seafaring and engineering team, on-site operations consisted only of deploying mooring lines and connecting them to the platform. In the future, after an unexpected case of turbine failure, the whole platform can be easily towed back to a port for repairs. Over the next few weeks a commissioning, testing, and startup procedure will be completed. This will include trial operations and a phased ramp-up in power production to full capacity. 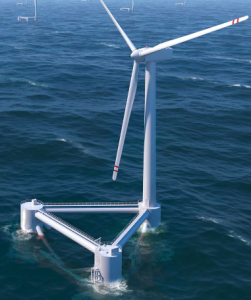 CTO Rodier is justifiably proud of the propiertary Windfloat technology he sold to Principle Power. Stability was one of his design goals for the WindFloat. "The wind and the waves will both be affecting the platform at any one time, but by design it has the structural stability to withstand these [forces]," Roddier told Recharge. The 1,200 ton WindFloat is designed to float half-submerged, moored in waters over 120 feet deep. The rig's three legs measure 90 feet high and 24 feet in diameter. They are part-filled with 230 tons of static water ballast for stability. The three column design connected by trusses evolved from semi-submersible oil and gas rigs but has several unique features, including steel columns fitted with hexagonal steel plates that use a principle called "added mass" to dampen movement and help provide stability in open water. A closed-loop active ballast system is designed to compensate for wind force and direction. Water is moved between columns so that the mast remains vertical, optimizing electricity production. It has a response time of between 30-60 minutes. In rapidly changing wind conditions, pitching of the blades can be performed to help minimize the wind-induced trim if necessary. 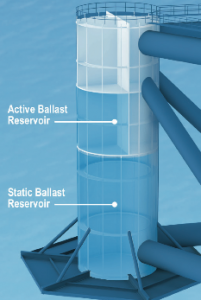 The offshore tow in open Atlantic waters was made possible by the stability performance that also permits the use of off-the-shelf wind turbines from any manufacturer, according to the company, and enables Windfloat turbines to be sited in locations with heavier winds and seas. Far offshore, wind farms might also avoid lengthy legal battles similar to those that stalled Massachusetts' Cape Wind project. With greater geographic flexibility, the floating wind farm operators could also choose areas not known for bird or marine mammal migrations. Steering clear of shipping channels and fishing would also eliminate environmental issues. Alla Weinstein, CEO of Principle Power, said in a press release, "In a way we are making a similar leap towards new energy resources as the oil and gas industry did in the 1970's when it began using floating structures." Principal Power has teamed with Portuguese utility Energias de Portugal on the pilot project. If it proves successful over the 12-month monitoring period, they plan an eventual 150-MW wind farm to feed the Portuguese grid from batteries of wind turbines that could be sized at 5 MW apiece.

Will the Windfloat solve the not-in-my-backyard problem?