Skeptics once dismissed EnviroMission's desert Solar Tower as a visionary mirage, but now the huge energy project is on the verge of becoming reality, and, someday a world-class tourist magnet like the Bilbao Guggenheim--and that's something that punch-drunk Arizona could use to rescue it from its real estate debacle. (Just the surge of old hippies looking for the "god bong" will spike state tourism levels--especially each year after Burning Man.) Remember, many mega-structure fans have been loyally following the project's slow progress for years, living with a few hopeful but vague cable TV updates. Now the officially green-lit-future is here (press release): Faithful+Gold, one of the world's largest engineering firms, famous for the Burj Al Arab in Dubai and the New York World Trade Center Redevelopment, has just come on board. The project is currently undergoing site engineering and land acquisition. Once completed, construction will begin on the project's 2,625-foot tower--just 390 feet shy of the Burj Khalifa in Dubai. Delivering power by 2015, its 200-megawatt capacity will feed the grid with enough energy for 150,000 US homes. 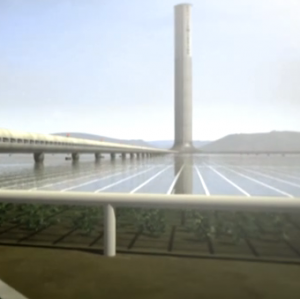 The simplicity of EnviroMission's design is the source of the solar tower's beauty and power. At the foot of the huge tower is an open-sided, low and vast, trans-parent roof called an air collector. This encircles a hub of centralized turbines, which serve as entrances to the project's powerful thermal engine and vortex in the tower. In case you thought the tourism crack was a joke, you'll see a elegant "observation deck" when you watch the proposed project's CGI techno-rave, video above, or something a little more informational.

Simply explained, the Arizona desert sun beats down on the transparent air collector; underneath, the whispering gush of incoming air heats up. With predictable, average, daytime temperatures of 86? F, the air under the collector is heated to 176-194? F. As the temperature rises and the air becomes lighter, pulled by the cooler, distant air above the tower-top, it reaches speeds of 49+ feet per second. As the hot air races up the tower's shaft, its force has already been converted into mechanical energy by spinning the turbine blades at the base, and then converted into electricity by conventional generators. 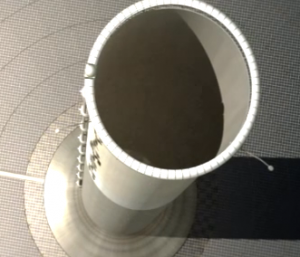 The temperature differential sucks up heated air at the bottom

The secret to that giant sucking sound at the turbine's mouth is simple math. As hot air moves up inside the tower, every 300 feet from the desert surface the surrounding ambient temperature drops by about 1 degree. The greater the temperature differential, the harder the tower sucks up that heated air at the bottom, and the more energy is generated by the turbines. EnviroMission CEO Roger Davey explains the solar tower technology to Gizmag:

EnviroMission estimates the tower will cost around US$750 million to build. Generating a peak of 200 megawatts and running at an efficiency of around 60%, it is considered more efficient and reliable than other renewable energy sources. The need is already there. Future output has already been pre-sold. The Southern California Public Power Authority recently signed a 30-year power purchase agreement with EnviroMission to provide enough energy for an estimated 150,000 US homes. The tower should pay off its cost in just 11 years. Under the terms of the pre-purchase agreement, the tower is to begin delivering power in 2015. Since a large city like Los Angeles requires total power in the region of 7,200 megawatts, EnvironMission hopes to build more towers to replace the existing, primarily coal-based energy supply for that city's 3.7 million-odd residents. My only concern: If EnviroMission's alt-energy thing doesn't work out, will astronauts on the International Space Station be able to use the tower as a huge sundial?