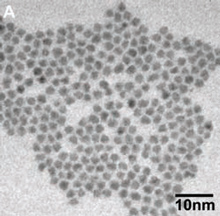 A team of Israeli researchers has found a technique for using nanosized semiconductor crystals that could potentially be used for new types of highly efficient and cheap thin-film solar cells, according to a report published in the journal Science.

Reporting on the finding, MIT's Technology Review puts the technology into context as follows:

The key to using silicon in electronic devices such as transistors and solar cells lies in doping, or adding in small quantities of other elements, to create an excess of electrons (n-type) or positively charged holes (p-type) that change the material's conductivity. N-type and p-type silicon are butted together to form p-n junctions, the basic building blocks of electronic devices such as solar cells, light-emitting diodes, and transistors. For years, researchers have tried to do something similar with quantum dots, tiny semiconductor crystals a few nanometers in diameter. [The Israeli researchers have successfully] doped indium arsenide quantum dots to create n-type and p-type materials.

The quantum dots the researchers have developed show potential for the production of inexpensive solar cells since they can be created through simple, low-cost chemical reactions, according to the report. They also promise high efficiency, since nanocrystals of some semiconductors can emit more than one electron for every photon absorbed. In addition, changes in size and shape can change the colors of light they absorb. Quoted in the report, Uri Banin, professor of chemistry at Hebrew University in Jerusalem and lead researcher on the project, points out that it would be possible to "tune the nanocrystal absorption to match the solar spectrum."

Research continues to adapt the technology to solar cells. Click here for the report in Technology Review.

Beyond solar cells, can you imagine other applications of this technology?