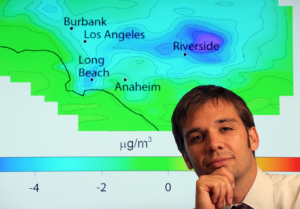 Courtesy of Daniel A. Anderson/University Communications

What would happen if by the year 2060 75% of drivers in the greater Los Angeles area have hydrogen fuel cell vehicles that emit only water vapor, greenhouse gas emissions are more than 60% lower than in 2009, and levels of microscopic soot and ozone are about 15% and 10% lower, respectively?

"For the first time, we can look at these future fuel scenarios and say how they're going to impact things like ozone and particulate matter, which have severe effects on people's lungs and quality of life."

His 2060 analysis, which was funded in part by the U.S. Department of Energy, appeared online recently in Environmental Science & Technology. It's the first peer-reviewed test of the computer model, which has caught the attention of California policymakers and auto industry leaders trying to integrate alternative fuels into the transportation system.

"We're transitioning to new technologies. How do we do this while maintaining our lifestyle and keeping our economy robust?" Stephens-Romero asks. "We don't know how these changes could affect the future."

STREET considers variables in extreme detail -- not just which fuel vehicles will use, but also how the fuel is made, where it comes from, how it's transported and along which routes, and where fueling stations might be located.

The computer model can also determine what changes must occur to achieve a desired result, such as determining what percentage of the vehicle fleet would need to run on alternative fuel in order to bring pollution below federal limits.

"California policymakers could use the tool in this way to improve air quality in the region," says Stephens-Romero.

"The research is well positioned. Considering the development of a hydrogen infrastructure is at the crossroads of global climate change, the future of the automobile, the state economy, and California's leadership in addressing the conflict between energy and the environment."

You can read more here.

Do you drive a car that operates on alternative fuels? Do you see yourself doing this in the future? Share your thoughts.