Tidal power developers say 2016 is shaping up to be the new technology's coming-of-age year, with projects in France, Scotland, and Canada successfully ramping up.

While older tidal power projects use a "barrage" system that generates electricity by pushing tides through turbines embedded in reservoir walls, the new systems place turbines right on the seabed to directly capture the flow of tidal energy.

The company furthest ahead in the tidal sweepstakes, Ireland-based OpenHydro, has just added its second turbine to EDF's Paimpol-Bréhat tidal array off the coast of Brittany. The huge contraption was lowered to the seabed in under an hour, where the two 16-meter turbines will operate 40 meters below the surface. (See the EDF promo, in French with English subtitles.)

Over the summer, the array will be connected by submarine cable and begin exporting 1 MW to the French electrical grid. 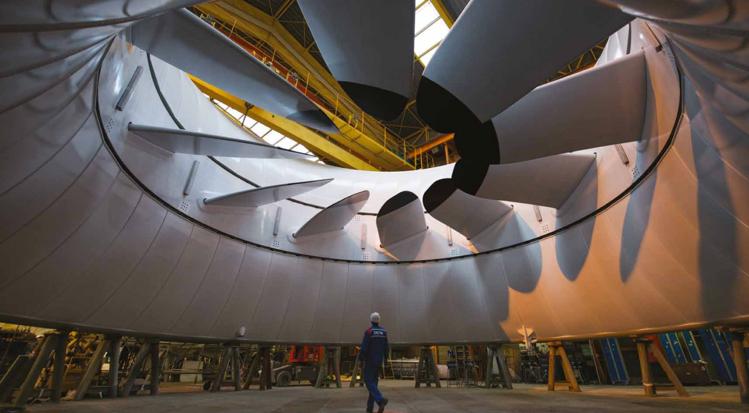 Nipping at OpenHydo's heels, another undersea power cable has been laid in Pentland Firth on the coast of Scotland, as Atlantis Resources' MeyGen project dry-land tests its first turbine's drive train before installing it in the fall(see the press release).

Once all 269 turbines are in place, MyGen will generate 400 MW — enough to power 175,000 homes, according to Tim Cornelius, the CEO of Edinburgh-based Atlantis Resources.

At stake is a billion-dollar global supply chain, although at this point both companies just want to get enough steel in the water to start driving down costs (view the MyGen promo). 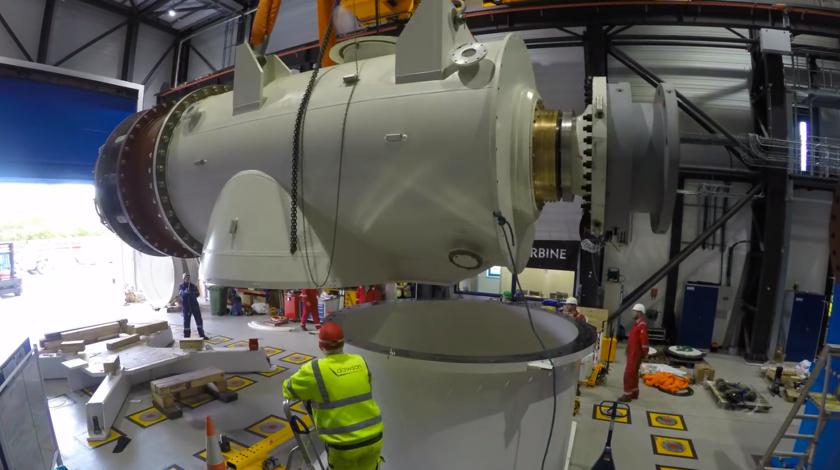 Both turbines are uncompromisingly different, and years of performance data will be parsed before a clear design winner emerges, which makes contrasts easy to point out. OpenHydro's Open-center turbine is an example of simplicity. To boost output you just increase the turbine's size, allowing larger fixed-pitch blades to catch both the ebb and flow of the tide.

But that solution comes with a price. It eliminates pitch control, which according to Cornelius, is the key to insuring improved performance during the tidal cycle. He adds that the pitch control on MyGen's AR1500 turbine also limits stress from powerful forces during extreme weather.

By using pitch control to optimize the blade angle, MyGen can build a smaller, cheaper but still effective turbine. Of course pitch control only works if the blade can track the tidal flow by yawing — that is, rotating on its axis. Adapting to most seabeds where tidal reversal isn't a simple back-and-forth 180° switch. Slight deviations in the flow can reduce yield and increase stressful loads on a fixed turbine.

OpenHydro counters that argument by saying that its simpler, open-center turbine offers lower operating costs, along with robust, long-term reliability.

Basically, the open-center turbine comes with a horizontal axis rotor with power take-off through a direct drive, permanent-magnet generator. The blade tips are housed within an outer shell, and, to reduce wear, the turbine is designed to generate energy at a slow rotational speed. The design also avoids lubricating fluids that could cause pollution. Tests have confirmed that the unit produces very low levels of noise.

Currently, the cost of generating electricity using an open-center turbine is comparable to offshore wind. In the longer term, large-scale deployment will trend costs toward those for onshore wind. As fossil fuel prices increase, the case for tidal energy strengthens further.

Crushed by the Bay of Fundy

Across the Atlantic, OpenHydro is waiting to install two new 2 MW tidal turbines in the Bay of Fundy, Nova Scotia. If successful, afterwards another turbine will be added, creating a 4 MW tidal array.

This is a redo after a debacle In 2009 when OpenHydro tried to install its namesake tidal turbine — the world's first — in the treacherously fast bay waters.

The company wanted to pit its new technology up against the highest tides in the world, which can lurch up 55 feet and sometimes more.

But only 20 days after the 400-ton, six-story turbine was lowered onto the seabed, the tides swept away and destroyed all 12 rotor blades. Afterwards, officials determined that tidal flows were two and a half times stronger than the turbine was designed for.

Today, wary after the first turbine's quick, brutal demise, OpenHydro is ready to test this new turbine again against the Bay's 160 billion tons of rushing water — not once, but twice a day. This will be the ultimate test, as tides reach speeds of five to six meters per second and rise up to 17 meters — the height of a five-story building.

Unfortunately OpenHydro is still waiting after the Environment Minister put the project on hold last May, saying the province had to approve a proposed environmental monitoring program.

Not losing any time, OpenHydro hauled the first turbine to Halifax for ballasting and final inspections, opening up space to finish the second turbine.

Meanwhile, OpenHydro has almost 1.7 GW of projects in the pipeline. They include the Brims Tidal Array off Orkey Islands, Race Tidal off Channel Islands, Tidal Ventures off Northern Ireland, and Normandie Hydro at Raz Blanchard, France.

"We've reached a turning point in tidal turbines," Thierry Kalanquin, head of energy and marine infrastructures, told Reuters. "We hope to get one billion euros in sales in ten years."