Lately, solar industry records have been falling every week. And American solar panel maker SunPower can take credit for most of the mayhem.

The most dramatic record fell as the sun rose on the morning of June 23, and the world watched a live-stream of the Solar Impulse 2 landing in Seville, Spain. Once the landing gear touched the runway, the aircraft became the first solar plane to cross the Atlantic Ocean, arriving 71-hours and 8-minutes after taking off from New York.

The four-day trip was the latest leg of a highly publicized round-the-world showcase for renewable energy. 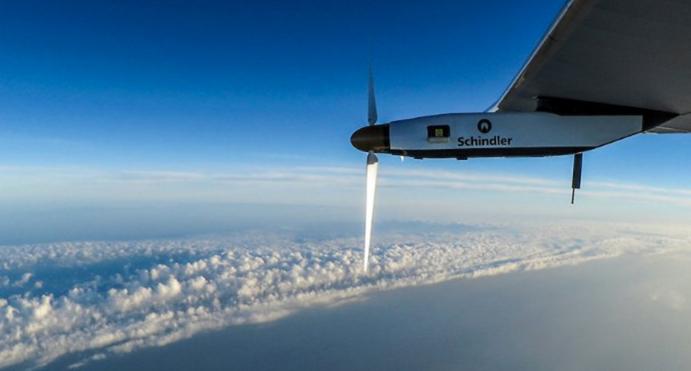 Even though the Atlantic had been fairly peaceful, the trip was a challenge. Pilot Bertrand Piccard, flying solo, had to remain alert while subsisting on a ragged regime of twenty-minute cat-naps, which took a toll on his aging, baby boomer's nervous system.

And no matter how carefully ground crews juggled the flight path to skirt any bad weather that might damage the fragile plane, there were several stressful moments, Piccard said, after surviving bumpy cold fronts and dodging storm clouds that hid powerful up an down drafts.

Speaking to the Guardian from the cockpit, Piccard explained what kept him fighting the dullness of sleep deprivation: "The goal is to inspire people to use [renewable] technologies and show people they can use these technologies every day." 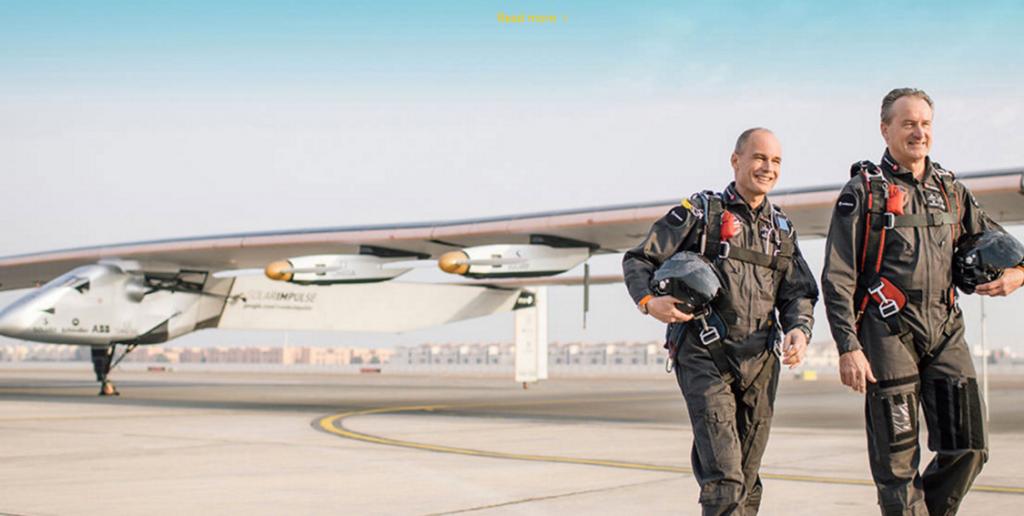 A few days later a completely different record fell when SunPower announced that its most advanced solar panels had converted 24.1% of light into electricity, breaking an earlier company record — only months old — of 22.8% (read the press release).

"With greater efficiency, we can fit more watts on the roof," said Peter Cousins, SunPower senior vice president of research and development.

Both records share a crucial connection: Solar Impulse 2, weighing in at 2.3 tons, uses SunPower's Maxeon solar cells because their efficiency and thickness, an average of only 135 microns, is important for the power-to-weight ratio of the aircraft (watch a time-lapse video construction). 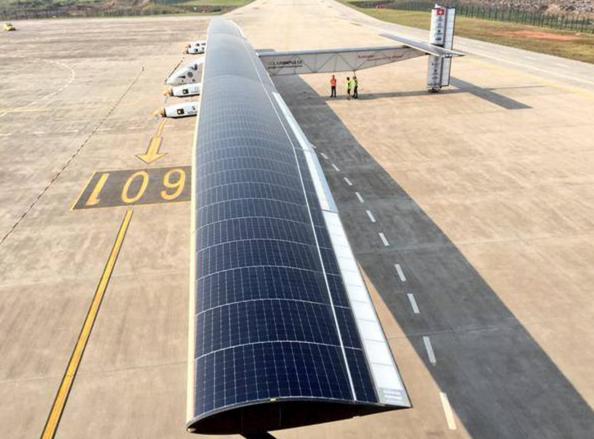 During daylight, the solar panels charge the plane’s batteries, and that stored power allows the aircraft to fly during the night.

Since the Solar Impulse is a work in progress, the solar cells still can't completely refill the batteries each day, so each flight is capped around five to six days.

Solar Impulse 2 is an upgrade from the original Solar Impulse developed in 2009 by co-founders Bertrand Piccard and André Borschberg.

While Piccard and Borschberg were designing the prototype, they were looking for solar cells that optimized the performance of the weight-constrained craft. They eventually discovered that SunPower had developed solar cells for the NASA Pathfinder Plus and Helios programs. Those cells were light, flexible and thin, while still delivering maximum efficiency and reliability. According to Borschberg:

In comparison, the efficiency of solar panels used on homes is 16%. The best are those used on satellites (30%), but they're too heavy for the solar aircraft.

It took 30 engineers and 25 technicians, supported by hundreds of advisers, four years to build the prototype. The upper wing surface was covered with a skin of nearly 12,000 embedded SunPower solar cells, while the undersides of the wings were coated with a high-resistance flexible film.

On July 7, 2010, the prototype, known as the Solar Impulse 1, was flown 26 straight hours. It went on to set eight world records and became the first solar airplane to fly through the night, between two continents and across the United States.

When it came time to build Solar Impulse 2, the design had to be improved so that it could travel across two vast oceans, the Pacific and the Atlantic.

They increased the wingspan almost 9 meters and attached 50% more solar cells, this time also covering a widened fuselage. Although the plane's four 7.5 KW motors are the same, the propeller size was increased and the battery pack was almost doubled. All of these additions increased the weight by an almost 700kg.

With its 72m wingspan, the Solar Impulse 2 is wider than a Boeing 747, and carries over 17,000 solar cells. The plane’s batteries make up a quarter of the craft’s 2.3 ton weight.

Typically, the plane flies at about 30mph, although it can go faster if the sun is bright. 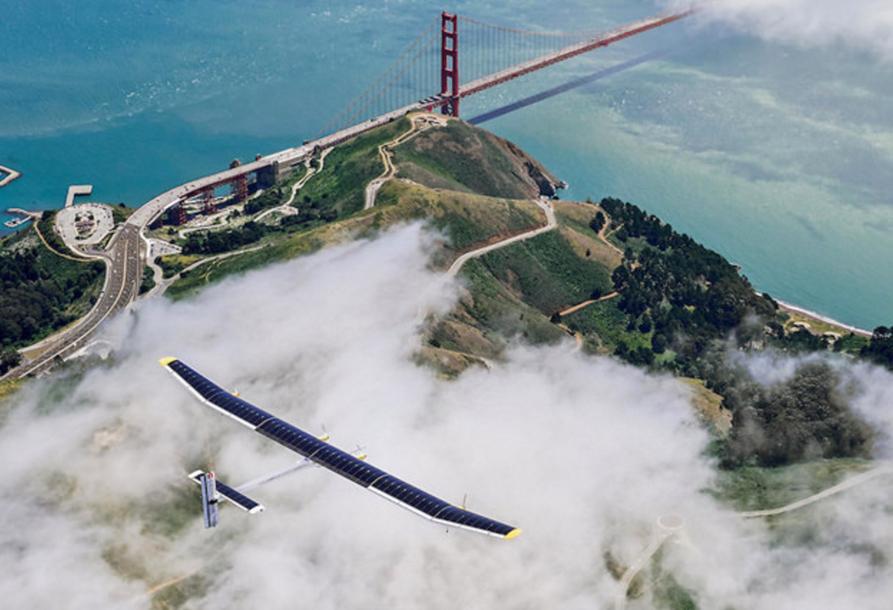 Solar Impulse 2 has flown its 22,000-mile trip in stages, with Piccard and Borschberg taking turns at the controls plane.

Borschberg piloted the 4,000-mile flight between Japan and Hawaii that lasted 118 hours, smashing the previous record for the longest uninterrupted journey in aviation history. 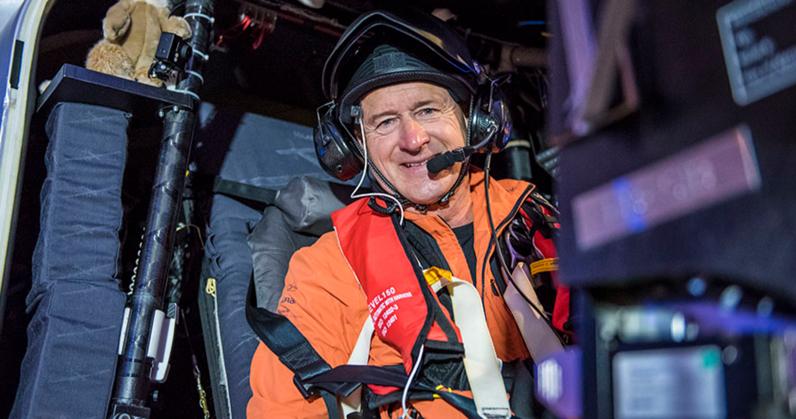 This long adventure has had its difficulties. Crosswinds in China caused weeks of delays in 2015. Overheating batteries during the Pacific crossing forced the plane to spend the winter inside a hangar in Hawaii. The team also overcame financial troubles in 2015 after raising €20M from sponsors.

The Solar Impulse 2 began its journey in March 2015 in Abu Dhabi. It's now just one leg away from the finish line. But the final return to Abu Dhabi hasn't been announced and will depend on weather conditions.

Has the Solar Impulse 2 helped to sell solar energy?