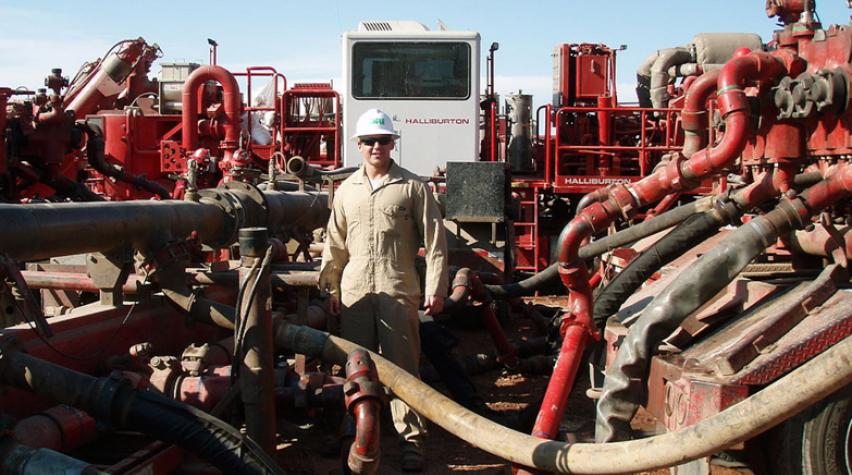 1/4   in the series The Growth of Global Fracking

In November 2014, OPEC and Saudi Arabia started a price war against the US shale industry (and other high-end producers) by refusing to rein in output and fighting for market share instead. This should have driven some shale oil producers bankrupt and kept North American shale oil from depressing prices on the global oil market. But that hasn't happened yet.

A year later and still waiting for the drillers to buckle, OPEC doubled down and increased oil production again. This has driven oil prices down to about $40/bbl, their lowest levels since 2004. Along with the decision to plunge into an expensive war in Yemen straining the kingdom’s budget, Saudi Arabia has been forced to tap its foreign reserves after burning through US$100 billion.

Looking at a bleak future of low oil prices, Saudi Arabia's King Salman announced his first budget, which plans to radically cut subsidies and sell stakes in state-owned companies to compensate for the precipitous drop in oil revenue. The Kingdom is also raising domestic fuel, power and water prices (from a very low level), according to the official Saudi Press Agency.

Clearly, this doesn't smell like victory, and from a production standpoint, by pitting itself against unconventional oil and its disruptive technologies spreading a tsunami of oil across the world, OPEC's reactive strategy could end in failure.

Russia, one of OPEC's arch competitors, has begun to adopt "American" fracking. At the beginning of the market share fight, the country's oil firms weren't even considered contenders because they had so many declining Soviet-era oil fields cluttering their books.

But after snubbing OPEC’s offer to collaborate and prop up prices, Russia has been easily keeping up with the cartel by pumping at the fastest pace since the Soviet Union's collapse.

According to Bloomberg, even though US and EU sanctions cut access to foreign financing and technology, the Russians have managed to squeeze more crude out of some of the country’s old fields for several years.

Part of the reason is that Russia had imported lateral drilling and fracking from the US for several years (along with a timely drop in the ruble).

While vertical fracking had been used in Siberia for ages, once it was coupled with horizontal drilling, the synergies helped Russian producers recover 15 percent more crude from aging reservoirs.

Before TNK-BP was absorbed into Rosneft in 2013, it used hydraulic fracturing along with horizontal drilling in almost half the wells that year, a sixfold increase in just two years.

Adoption has spread throughout the rest of the industry. Rosneft employed the technique at 50 wells in 2013, up from just three in 2012. At the same time, Gazprom Neft, the oil unit of Russia’s natural gas monopoly, doubled the number of horizontally fracked wells.

“This is a very big change that has literally happened in the last year and a half,” said Gazprom Neft’s deputy chief executive officer. “We've made breakthroughs.”

“Everyone is now using horizontal wells because that’s the way to maximize returns,” said Lev Snykov, a partner at Greenwich Capital in Moscow, told Bloomberg.

All this know-how is coming from oil services companies like Houston-based Schlumberger, the world’s largest provider, which is vying with US rivals like Weatherford, Halliburton, and Russian operators led by C.A.T. Oil. Before sanctions, Schlumberger had 12 separate fracturing fleets — machines with crews — working in Russia. Russia's C.A.T., which had a market-leading share of 31 percent, had about 15.

Schlumberger had helped a major Russian oil company in western Siberia improve drilling and field-development by using its advanced down-hole sensors to map exactly where underground fractures were spreading in a horizontal well. Four frack stages were used in the well and monitored from a second well using equipment that hears subtle seismic events underground.

In the Russian town of Bugulma, Geneva-based Weatherford announced a partnership last year with an electric-pump plant to make artificial lift systems, which are used to boost pressure and increase output from flagging wells.

Halliburton has announced a partnership with Gubkin Russian State University of Oil and Gas to provide “state-of-the-art” support, including staff for technical boards and educational material for the school’s unconventional program.

While Russia clearly needs Western technology and expertise for offshore exploration, the sanctions may be less effective in stopping onshore shale development, with Russian officials arguing that most of the technology the country needs is becoming available domestically, or from non-Western sources such as China.

The head of state Gazprom Neft, Alexander Dyukov, has argued that even with sanctions, the country would be able to produce 1 million barrels per day from such formations by 2020-22.

Russian companies need an additional 250-300 heavy drilling rigs and 50-60 rigs for hydraulic fracturing, he acknowledged, but if these could not be produced domestically, they could be purchased instead from Asia, and in particular China. Rosneft takes a similar view. “The technology is so diverse and dispersed around the world that we don’t feel there will be a real impact,” the state oil giant’s first vice president for upstream operations, Eric Liron, said.

If sanctions are lifted, Siberia's Bazhenov Formation comes into play.

Everything about Bazhenov is huge — beyond Texas huge. It covers an area of almost 1 million square kilometers — the size of Texas and California combined.

Bazhenov is estimated to hold more than 1.2 trillion barrels of oil, of which about 75 billion might be recoverable with current technology, making it the biggest potential shale play in the world, according to the U.S. Energy Information Administration.

To put that in context, Bazhenov contains an estimated 10 times more recoverable oil than the famous Bakken formation in North Dakota and Montana.

Bazhenov could produce more oil than has so far been extracted from Ghawar, the super-giant field in Saudi Arabia that made the 20th century the age of petroleum.

Gazprom Neft, the oil arm of Russia’s state-run gas exporter, said production from its Bazhenov shale formations could start in three years even if US sanctions are still limiting the sale and transfer of fracking technology.

The company aims to produce about 40,000 barrels of crude a day from the deposits from 2018, Kirill Strizhnev, head of unconventional projects for Gazprom Neft, told reporters in Moscow. That’s about 2.7 percent of Gazprom Neft’s daily first-quarter output of 1.5 million barrels of oil equivalent.

“Foreign companies are stronger in this type of drilling so it’s faster to do it with Western help,” said Alexei Vashkevich, head of geological exploration and resource base development at Gazprom Neft. “Can they be excluded? Yes, they can. Can we do it without them? Yes, we can. It will be a little harder and will take a little longer, but it’s possible.’

The company, which has drilled nine wells at Bazhenov, expects extraction costs to be similar to those of conventional deposits, Strizhnev said.

As collateral damage from Saudi Arabia's full-bore, take-no-prisoners pumping strategy, many US petroleum engineers and rig specialists with fracking experience have had to find new jobs.

And Saudi Aramco has been trying to poach them all, which became evident last spring after the company posted a new job category — unconventionals — on its website to help the country play technology catch-up.

It turns out that the Saudis fear damaging their legacy reservoirs by learning advanced shale drilling on the job. So to date, it's been slow-going as only eight shale gas wells have been drilled, with ambitious plans to drill 135 wells over the next three years waiting to be staffed. So they're trolling for experienced outsiders.

Aramco also posted ads on Rigzone and LinkedIn that keyed in on on shale-smarts, and one listing quickly drew 160 applicants in a month.

“Consider the opportunity to join our team and help shape the future of key global unconventional resource development,” the ads enthused, discreetly throwing in the towel as the oil price-war raged in the global media.

“We’ve seen people who have been reticent to look at Saudi Arabia who are now more accepting of a job there,” he said.

Adopting an "if you can't beat them, join them" policy, the Saudis, along with the rest of the world, will be learning to frack and drill the American way — horizontally — while trying to replace 900,000 barrels a day of domestic crude currently used to generate the Kingdom's electricity.