How US Shale Drillers Survive the OPEC-Engineered Oil Price Crash

When Ryan Lance, CEO of ConocoPhillips, told an OPEC conference in 2012 that the cartel was complacently under-estimating the global impact of US shale drillers, the audience, flush with $100 a barrel oil, ignored his timely warning and taunt. Citi analysts later reported that the reality of the US shale revolution had been scoffed at from within the OPEC bubble as high-cost folly, according to CNBC.

But to be fair, the shale revolution had been so swift that even reporters were behind the curve and playing catch-up. After Lance's speech, articles debated whether he had been trash-talking or not.

Shale oil is here to stay

Lance knew what he was talking about because he'd rebuilt his energy company by selling more than $14 billion in assets to stake its future on US and Canadian oil and gas plays, betting that lean and mean could generate cash at low prices and allow the company to ramp up or halt output quickly. More importantly, he'd seen the new innovations that were starting to spread throughout the industry. 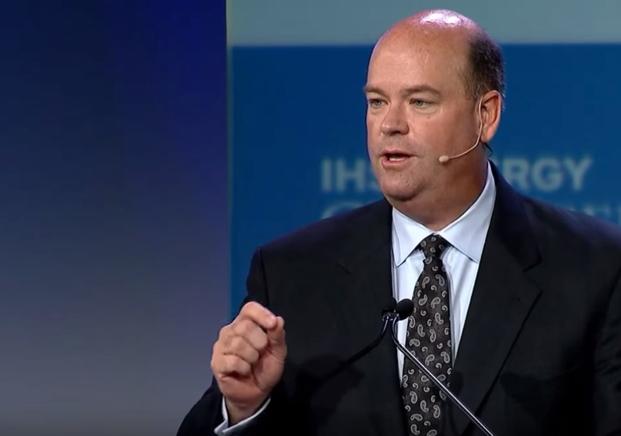 Two years, a drilling war and price crash later, Lance returned last June, and this time a chastened OPEC sat up and listened. Shale oil “is here to stay,” Lance again taunted them, according to Bloomberg. His message: shale is more resilient to lower oil prices than anyone had expected. He also felt that US drillers were more nimble than OPEC's state-run behemoths that were primarily nursing aging reservoirs while adding new export and import refineries.

Then he KO'd them with the stats, pointing out that in 2012 the US was pumping 6.2 million barrels a day, and largely due to shale producers, output had already climbed to around 9.1 million.

Lance had seen two trends powerfully converge and explode. Break-even costs had dropped an additional 15 percent to 30 percent just months before his second OPEC speech, while many wells were also pumping 30 percent more oil during that same period.

So while the Saudi's are still the world's swing producer, easily driving down oil prices at will, shale drillers will now cap any rise at around $70 a barrel by quickly completing wells that have been drilled and fracked but held in reserve.

He dramatically closed with a warning to OPEC's how-low-can-we-go strategy: shale sweet spots can bank 10 percent returns even with oil prices as low as $40 a barrel, putting them head-to-head with conventional fields and well below deepwater offshore projects and Canadian tar sands, where many future projects are currently being shelved.

Only time will tell how many rigs are located in actual "sweet spots," but a future of low oil prices will quickly sort that unknown out.

So how have Conocco and other shale drillers weathered the swift price collapse?

Drilling innovations have been improving output the since the shale revolution began about a decade ago, generated by a simple fact: drilling thousands of wells since 2006 has allowed drillers to experiment, learn and innovate at a much higher rate than the conventional oil industry. 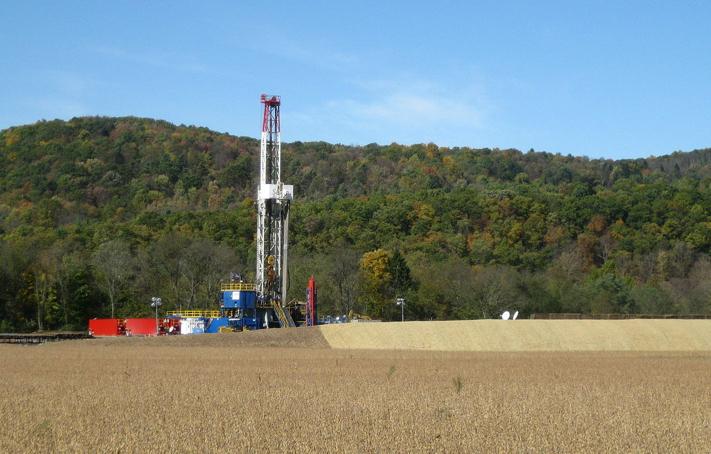 Perhaps the most productive innovation has been the evolution of horizontal drilling, which has allowed operators to drill increasingly long laterals, which can now reach a mile or more and provide more room for more frac points, with a predictable rise in recovery rates.

One aspect of horizontal drilling that doesn't get enough attention is multi-pad drilling. It is a major time-and-cost-saver, since the rig only has to be moved as little as 20 feet before the next well is started. This has eliminated extra access roads, pipelines, electricity, and worker facilities - creating millions of dollars in savings.

Multi-pad drilling led to the development of new walking rigs that travel to the next well under their own power, moving like hydraulic transformers on legs that raise up five inches while edging forward a foot a minute. That may not look impressive, but it's faster and cheaper than entirely dismantling a rig and trucking the parts over to the new site and reassembling it back together again (see interactive graphic). 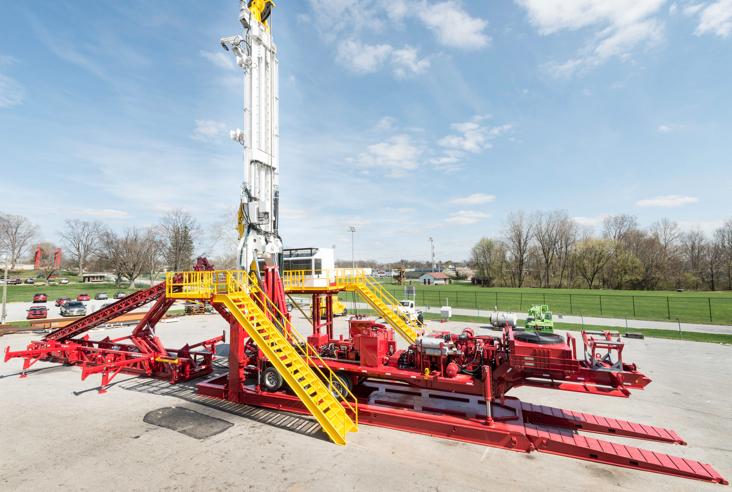 These advanced rigs are usually "AC rigs," running on alternating current. This allows operators to individually adjust the power going to different components. It's simple to rout one level to mud pumps shooting fluid into the well while tweaking the top drive that controls the drilling speed. This transition from older, mechanical rigs, constrained by interconnected belts and pulleys powering all parts, has been effective far beyond its simplicity.

As walking AC rigs take advantage of pad clusters, this adds up to a savings twofer since the day rate for these rigs has fallen from $30,000 last year to about $20,000.

Anadarko Petroleum plans to boost the number of horizontal wells this year in Colorado’s Wattenberg play to more than 380 from about 360 last year, employing just a little more than half the number of rigs it used in 2014, said John Christiansen, a spokesman for The Woodlands, a Texas-based producer. “Technology continues to improve and enhance the way we’re able to do things, and the walking rig is another evolution in that process.”

Using multi-pad clusters, Norway's Statoil has cut the cost of drilling from $4.5 million to $3.5 million a well in the Eagle Ford by reducing the time it takes to drill a well from an average of 21 days to 17. The company is also placing fiber-optic sensors deep in the well so that operators can receive enough real-time data to make quick decisions on the fly, like tweaking drill bit position. 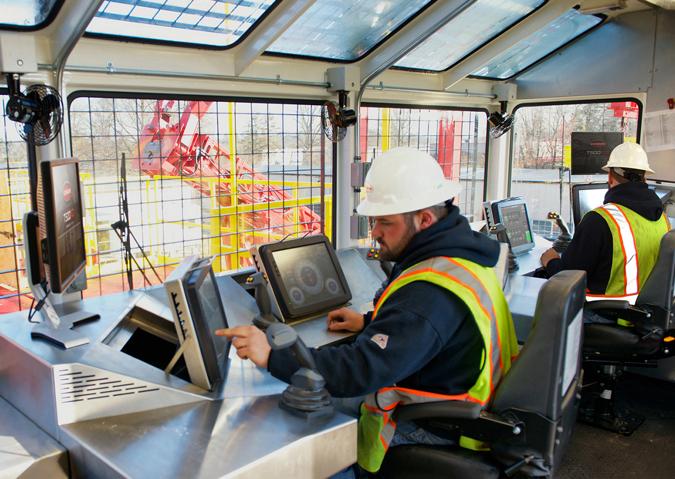 The sensors can also determine how far a frac is spreading through the shale to maximize well-spacing, making sure that one well isn't draining oil from another and that no productive shale is left untapped. Also, when sensors keep track of temperatures, pressure, and vibration on equipment that is out of sight, software can predict when equipment needs servicing before it breaks down.

Statoil has another use for all of that data it collects from its own wells and even the wells of partners and competitors. Armed with analytics, it holds seminars for its employees to determine which drilling and fracking techniques work best.

Because all of these embedded sensors have cranked up data input to 15 terabytes per well, data startups, such as Ayata, FracKnowledge, and Blade Energy Partners, are offering 21st century analytics. Now many companies invest as much in IT and analytics as in old-school nuts and bolts.

None of these US shale companies has escaped the oil price war unscathed. After all, you can't idle 50 percent of a nation's drilling rigs without laying off a lot of workers.

ConocoPhillips has cut 1,500 jobs since the downturn began in June 2014 and has said it’s continuing layoffs, while it tries to rein in spending by $1 billion over the next two years.

The company just announced that second-quarter income turned red, losing $179 million, or 15 cents a share, from a profit of $2.08 billion, or $1.67, last year, according to Bloomberg.

The company also said it would further reduce spending on deepwater drilling, particularly in the Gulf of Mexico.

Can US shale drillers continue to cut costs? 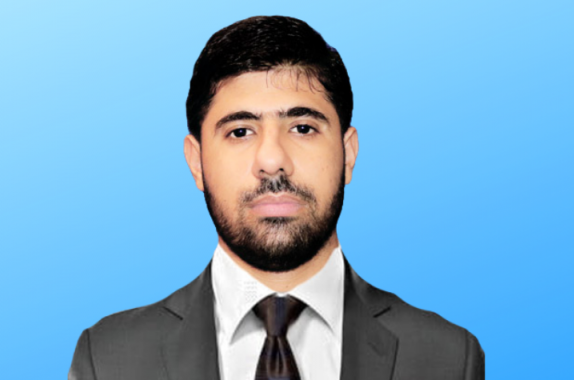 Learn about Khair’s work as a freelance process engineer and find out how he ended up in the profession and what he likes about his work.