For months Los Angeles has been putting millions of floating, black plastic balls into one of its largest reservoirs to block sunlight from triggering a hazardous chemical reaction. After already dumping 96 million balls into the water, last week Los Angeles Mayor Eric Garcetti supervised a ceremonial "topping-off" as 20,000 more plastic balls rolled down the steep embankment and finished covering the 175-acre, 3.3 billion gallon Sylmar Reservoir, which holds enough water to keep taps running for three weeks.

While Los Angeles is the first city to use this type of innovation to improve water quality, the black "shade balls" provide another, more important benefit: positive spin. It just so happens the balls also reduce "evaporation" and that's a powerful buzzword for a public thirsty for decisive action during the state's ongoing water crisis.

In the press release, the city touted that the balls are a “cost-effective way to reduce nearly 300 million gallons of evaporation every year, which is only enough drinking water for 8,100 people. Los Angeles consumed 13.6 billion gallons of water just during June. 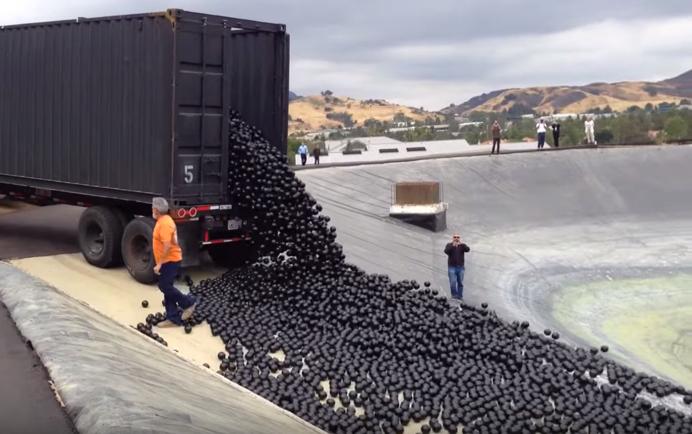 Since every politician knows the public doesn't want to hear that a multi-decade-old carcinogen has finally been removed from the drinking water, the mayor focused on the fact that the “shade balls” would save water in the midst of the worst drought in California history. He stressed, "In the midst of California's historic drought, it takes bold ingenuity to maximize my goals for water conservation," reported the Huffington Post. (More about the carcinogen produced by sunlight below.)

You can't blame him for trying, because infrastructure, no matter how vital, is always a tough sell. On a more substantial note, the Department of Water and Power reports that the project will also save more than $250 million in infrastructure upgrades needed to bring the reservoir into compliance with EPA regulations which require cities to cover, replace or take offline all open-air reservoirs.

Los Angeles spent $24 million on the shade balls, about 36 cents a piece, and three vendors knocked out the huge order."It was impossible for any one company to do," XavierC president Sydney D. Chase told Plastics News in a telephone interview. "We've been tooling up for a while so we can kick in the volume, be on time to fill our order, and act as a backstop in case another supplier isn't able to meet delivery."

It wasn't until 2007 that Los Angeles realized it needed shade balls. The DWP had discovered a serious problem: elevated bromate levels in three reservoirs.

Officials already knew the water contained bromide, which occurs naturally. There was also chlorine, which was used as a disinfectant. But when bromide and chlorine react with sunlight, they form bromate, a human carcinogen. 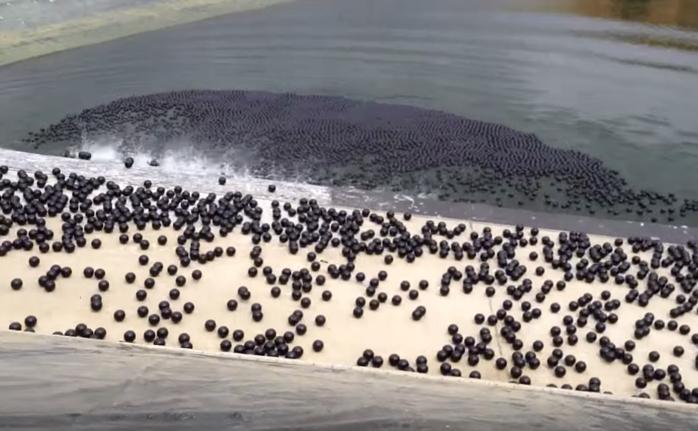 At the time, neither state nor federal regulations required testing for bromate in water supplies post-treatment, and the city only learned it had a problem from a laboratory conducting tests for a commercial customer.

"We knew we had to eliminate one of the three and sunlight was the best way to minimize bromate formation," Melinda Rho, manager of regulatory affairs for the LADWP, told Plastics news in a telephone interview.

She added, "We give credit to our own Dr. Brian White — a research biologist who recently retired — for his suggestion to try the  "bird balls." Because they had been used to prevent birds from congregating in water near airports, he realized that this simple technology could also shield water from the sun. They were also a low-cost option. "That helped us move quickly to resolve the bromate issue," said Rho.

By 2008, shortly after the bromate was detected, the utility dropped its first batch of hermetically sealed balls into the water as a low-cost, maintenance-free solution. It was only during tests that the city discovered it was also saving money by suppressing evaporation nearly 90 percent.

The balls also stop those birds and wildlife from contaminating the reservoir, shield it from dust, and block algae from forming on the water's surface.

Each ball is coated in carbon black, produced by burning hydrocarbons in an air-poor environment, which gives them an albedo near zero.

Although it’s mainly used in rubber (like car tires), about 9% of carbon black is used as a pigment in plastics and paints. It's found worldwide in food packaging, and meets the NSF/ANSI 61 standards for materials that come in contact with drinking water, according to space.io9 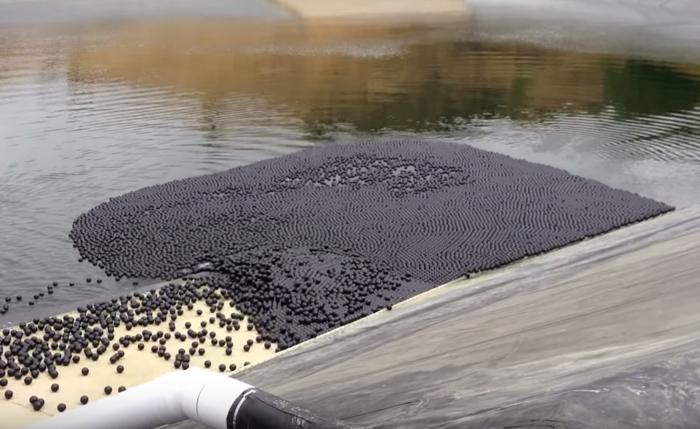 Carbon black reflects almost no light. That means that sunlight is absorbed, not reflected or refracted. Cheap, thin-walled black balls can provide actual shade while lighter colors permit sunlight to penetrate the water. Blocking as much sunlight as possible is the big selling point of black shade balls.

The balls are only part of LA's water-quality plan. The city is also building a new indoor reservoir to replace Silver Lake and Ivanhoe — both of which had lots of contamination issues beyond bromate, including birds, runoff, and algae.

Isn't this how science often advances, finding a new use for an old technology?