That's important progress because wave energy has turned out to be stubbornly difficult to develop. It's no coincidence that Lloyd's of London began selling maritime insurance as long ago as 1688, because after all, the sea is more than just a cruel mistress, she's mad crazy (think Glenn Close in Fatal Attraction) and can go off her meds at any time.

Let's put that unsettling image in perspective: skipping Freud for now, if Aesop were a hard-working analyst at Bloomberg New Energy Finance (BNEF), handicapping the renewable industry with his Tortoise and Hare Index, he would sort out the winners from the long shots and losers: Wind - hare, Solar - hare on steroids, biofuels - bunny, limping with a pulled hamstring muscle.

The tortoises, hobbled by aborted projects and flagging investment, are out of breath and out of the running. Some are chronic underachievers like geothermal, a smoker and definitely a long shot, and laggards like wave and tidal energy are renewables' lovable losers, clinging to life support after cramping-up before the race even started.

BNEF said it best about a year ago:

Global installations of tidal stream and wave power are set to grow to 148MW and 21MW by the end of the decade, from almost nothing today, but these are still trifling amounts in the context of the world’s power system.

Even though 'trifling' is too generous, every new industry has to start somewhere. And although this isn't the first time a company has tested technology at Hawaii's Wave Energy Test Site, or WETS, it's the first time the electricity is being transmitted by underwater cable to a nearby US Marine base. 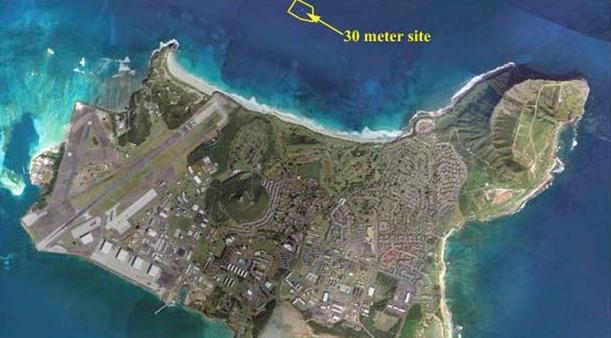 The base grid can send any extra power to Oahu's island-wide grid. Although it doesn't amount to much and fails to rise even to the level of a Godzilla pre-Tokyo-rampage snack morsel. Since the Azura is still at the 'proof of concept' stage, it only produces up to 20 kilowatts in peak wave conditions, just enough to power several houses. But at this point, NEI is just happy that their wave-generated electricity is on the US grid at all.

With the Azura bobbing nearly a mile out at sea, NEI Founder and CEO Steve Kopf said, “As the first grid connected wave energy device in the US, this deployment marks a major milestone for our team and the marine renewable energy industry." It's not quite 'a small step for man and a giant step for mankind,' but inspiring nonetheless. After all, this could be the one.

Not everyone was looking over their shoulder and massaging government grant officers. "It's a relatively small … but important step", Patrick Cross, senior project specialist at UH-Manoa's Hawaii Natural Energy Institute, told GovTech. That clears the air to see the progress that is being made in Hawaii and around the world.

There are currently just two other commercial scale marine energy projects delivering power to the grid. The first up and running was the 1.2MW SeaGen tidal stream device in Strangford Lough, Northern Ireland.

The second just began operation near Perth, Australia. Built by Carnegie Wave Earth, it's the only multiple unit grid-connected wave power plant, which has a peak capacity of 240 kilowatts. It's more ambitious than Azura, powering 2,000 homes. But investors don't like hearing that almost $100,000,000 was invested to bring Carnegie's technology out of the laboratory and ramp it up for commercial use.

Supporters insist costs will fall with economies of scale. They also contend that marine energy has benefits other renewables can't match. For example, tidal energy can deliver reliable base load power year round, and both technologies avoid the NIMBY stigma that has slowed the deployment of solar and wind (think offshore wind and mourn Cape Wind).

There's even more life stirring in the beleaguered sector, with a number of smaller pilot projects starting to deliver power to the grid. There has also been significant progress at demonstration sites, such as the European Marine Energy Centre (EMEC) in Scotland and Wave Hub in Cornwall. But once again, BNEF rains on the wave and tidal energy parade:

...the sector remains immature compared to other clean energy industries, despite millions of pounds being spent on research and development over two decades.

It's been a long slog to get the Azura this far. NEI tested its first small prototype in a wave tank. Today's pilot has already made improvements on an earlier version deployed at a test site off the coast of Oregon in 2012. 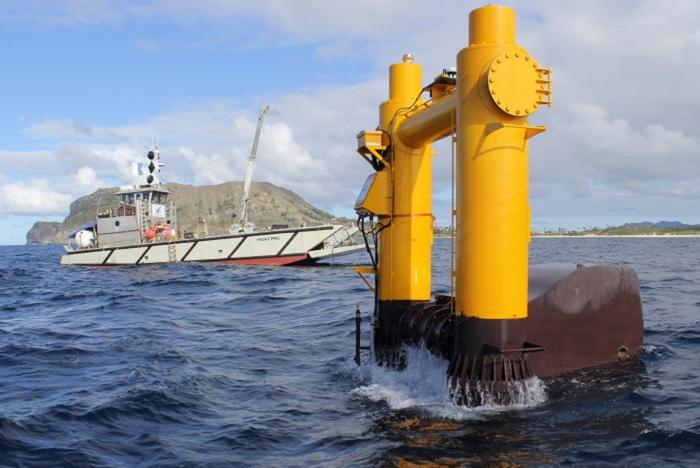 During this current demonstration at (WETS), the 45-ton Azura's unique 360-degree rotating float mechanism extracts power from both vertical and horizontal wave motions. Most other systems can only utilize up-and-down or back-and-forth movements.

Azura has two hydraulic cylinders located in the semi-buoyant shafts that transfer the ocean's power from the rotating float above. The shafts are partly flooded (marked “wet” in the image below). When a wave approaches, it makes the float above rotate while the hull below heaves and surges. That motion is transmitted to a crankshaft that drives the cylinders, creating pressure to drive a hydraulic motor. (See a video.) 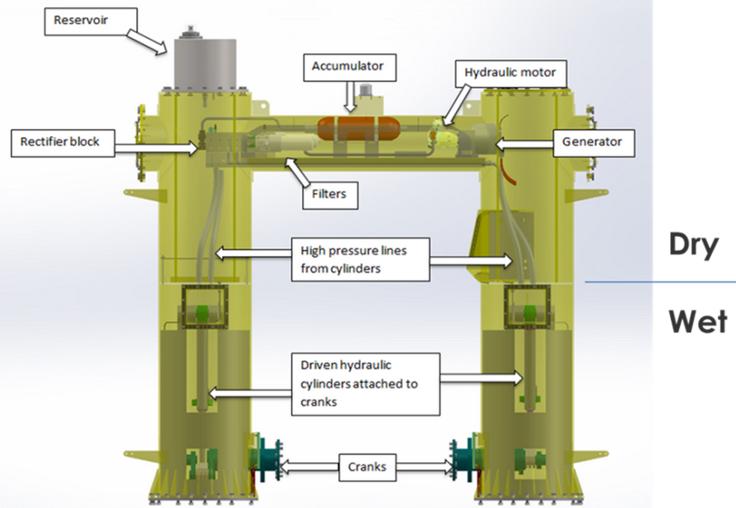 So why not let Aesop, er... Michael Liebreich, founder of BNEF, have the last word:

Tidal stream and wave power companies continue to face huge challenges. Although the potential is almost limitless, it’s a tough environment. It is possible to make equipment reliable, as the offshore oil and gas industry has shown, but it’s not cheap. And you have to put a huge amount of steel and concrete into the water, which is inherently expensive. It is still unclear whether this can be done at a cost competitive with offshore wind, let alone other clean energy generating technologies.

Are tidal barrages a more reliable way to use the sea?